Before Saying I'm 'Not Doing Enough,' Consider What I Go Through With Chronic Illness

Someone said to me recently that I don’t do enough. Really? This was said by someone who is a perfectionist type, who keeps an immaculate house, decorates for every holiday, has home cooked meals all the time and is always planning things with her family, yet still finds time to be involved in the community. Good for her. I’m glad she is able to do all of that.

Once upon a time that was me. I worked a full-time job but still managed to keep a neat house and all that entailed. I took college-level courses to help advance my career. I taught classes at church twice a week and rarely refused anything I was asked to do. I was a busy wife and mother, but still found time for virtually everything.

Then my health started failing. It wasn’t just one problem, it was diagnosis after diagnosis, including cancer and an inner ear disease that would lead to total deafness and permanent balance problems. There were also multiple autoimmune disorders.

I look fine on the outside. Sometimes I look a little tired. I always wear hats because, even though it’s been ten years since I was declared cancer-free, my hair is extremely thin on top and it’s not coming back.

More than 75 percent of the time, I am dizzy to some degree. I’m thankful when it’s only mild and not the toss-your-cookies variety. Thirty percent of the time, this is accompanied by tinnitus, a buzzing or roaring sound inside my head. I also have permanent balance problems and fall easily. I have terrible depth perception and can’t walk in the dark.

Ninety percent of the time, I have pain in at least three areas of my body at the same time that is significant enough to make moving uncomfortable. Pain medication is not effective for this.  The only thing that helps is making sure I get adequate rest and some stretching exercises that I try to do. I don’t let it stop me unless it escalates to an unbearable level. I move anyway. I’m thankful that I have a high pain tolerance but even I have my limits.

Touching can also be painful. I often shy away from hugs. Sometimes people will tap me on the shoulder with a finger to get my attention. I can feel that for an hour after they have walked away. The entire back side of my body feels like a giant bruise. Would you want anyone to poke you in the middle of a bruise?

I have to take a pill in order to have enough saliva to eat. One week out of the year this medication will typically quit working, as it builds up in my system, and I have to stop taking it for a week. That is a very terrifying time. Yes, I know you may have dry mouth too. And I’m aware of all the over the counter products to treat it. I’ve used them all. But none of them are effective for this degree of dryness, especially overnight. My saliva glands simply do not function without help. When I was first being diagnosed with Sjögren’s syndrome, before I was put on medication, I got sores in my mouth where my tongue touched my teeth. They had to be surgically removed. It was extremely painful. The medication gives me a quality of life that is very important.

My eyes and skin are extremely dry. Sometimes this interferes with my vision and my eyes are sensitive to sunlight. My skin is also so sensitive that a Band-aid left on too long can leave a scar.

I have an abnormal curve in my esophagus. Twenty-five to 50 percent of everything I eat will get stuck there and come back up later. I’ve given up chocolate almost completely because it makes it even harder. I may eventually have to have surgery to repair this, but it’s really a serious procedure that can have dire complications.

Nausea is a frequent companion, on pretty much a daily basis. The severity varies according to my other symptoms. Occasionally I have bladder spasms, which I do not actually feel externally but when it occurs I have to make as many trips to the bathroom as someone taking a strong diuretic. I also occasionally have migraines. I consider myself blessed if medication takes care of them and I don’t have to go to the doctor’s office or ER to get an injection. I once had a migraine that lasted for six weeks and was not responsive to any medication. During that time, I made three trips to the hospital.

I have cochlear implants and they are a blessing. I get to choose when I want to hear, and when I’m overwhelmed I can remove my earpieces and have complete silence. But if I’m around a group in an active listening situation, I’m “working,” whereas you’re doing what comes naturally. After about three hours of active listening, I feel like I’ve run five miles. My brain has been working hard. And there are some people I know who whisper purposely just out of my listening range and think it’s funny! It isn’t!

The biggest thing I deal with, however, is fatigue. I have four different conditions for which this is a symptom. If you say this to someone, they invariably say “Oh I know, I’m tired too!” Well, this is something totally different. It goes so far beyond tired! When you have illness-related fatigue, you can be fine one minute, pushing your shopping cart through Walmart, and the next thing you know your legs give out from under you because you have attempted to do too much that day — even though it’s only 1/20th of what you used to be able to do. You sleep but never hit that stage of deep restful sleep, so you wake up feeling like you haven’t slept at all. You feel weak. Sometimes you get delirious because you are just so tired.

It doesn’t take much to make you tired even when you’re well rested. A visit to the doctor’s office or the grocery store may mean you sleep all the next afternoon. And if you don’t get enough sleep, your pain-level skyrockets.

People say that they saw you out so you must be doing well, but they don’t realize the price you pay.

This is only a partial list of my symptoms. Any changes in circumstances can have huge consequences. I had the flu last spring and had complications that required surgery. They told me that, with my compromised immune system, it would take a year to recover if there were no setbacks. I’m battling a severe sinus infection now so I’m wondering how that is going to affect my recovery.

And yes, I’ve tried that diet. And that supplement. I know you mean well but I’ve had whole teams of doctors, nutritionists, and more people than you can imagine who have given an opinion. I’ve tried every single one in hopes that it would help and I could go back to work or just have a little energy. This didn’t just happen yesterday. I’ve been dealing with it for 27 years.

Those diets and remedies are actually harmful. I don’t mean that they do me physical harm, although there are certainly some that could. But they get my hopes up that I will get better, and then it doesn’t happen. Acceptance is something I struggle with every day. I miss being able to work and do the things I used to do. I know exactly the last day I worked — July 3, 2001. I would be back there if I could.

Well, I had my shower, fed everyone, the laundry is done. That’s a major victory. I can sit and love on my doggies and take a day at a time. I’m not going to stress over anyone else’s opinion. Sometimes I might have to cancel plans. People often get upset about that but looking after myself is my job. Most people won’t understand. But I’ll survive. With 23 surgeries, cancer, and so much more behind me, I’ve proven that I’m a survivor.

If anyone asks how I’m doing, I usually say fine. I might tell you about my brilliant granddaughter. Or I might make you laugh by relating a story of our two chihuahuas. I might tell you something good that happened lately. I won’t tell you about my ailments. What would be the point? It would just depress me to talk about it all the time. It was hard just to write this. I’m going to focus on the positive and enjoy the things I can. And I’ll never tell anyone they should be doing more.

Check out your Home page to see stories, Thoughts and Questions just for you. Follow topics, hashtags and authors to control what you see. 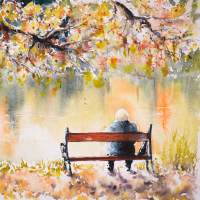