What Running a Half-Marathon Reminded Me About Mental Health Recovery

I recently ran a half-marathon. It was by far one of the hardest things I have done in my life, along with giving birth, breastfeeding and deciding to live through my darkest, most depressive moments. However, something unexpected happened. In the midst of trying to finish the race and post on social media in order to be praised for my accomplishments, I learned something about myself. I learned about how trying hard things impacts my mental health.

This race was like no other. I’ve run long distances before, and I’ve luckily never experienced bodily injury. Even though I had not run a half-marathon, I was confident it would be manageable and I would come out on the other side sore but feeling great. That was not the case on this day. Before it began, I was excited and the adrenaline was pumping as I crossed the starting line. The first mile was cold, but as my body warmed up. I felt alive. It was the rush that feels new and fresh with each run, and I knew the rest of this race was my time to shine. I didn’t expect what was coming next.

A sharp pain behind my knee immediately coursed through my leg, giving me excruciating pain. I didn’t understand why it was there. I stretched, I warmed up my body and I was ready. Why was this happening? I had previously gotten the advice from my sister-in-law to stretch every mile or walk at least 30 seconds at each marker, which I arrogantly thought was “crazy” until that point. But I was in pain, and I had to do something. With each mile, the pain increased. No amount of stretching or walking made it better. In fact, walking breaks had steadily made it worse. However, by mile six I was too far to turn back and all roads were closed for me to call for someone to pick me up.

I made it to mile eight before I was resolute that I needed to quit. I was determined to keep running in intervals to prove I was actually capable of running the half marathon. This stubborn view only cost me toward the end of the race. Then a beautiful thing happened. As I rounded the corner toward mile nine, there was my sister-in-law. She greeted with me cheers, smiles and a sign with my name on it. She had come out to the race for me and me alone, to let me know I could finish. In that moment, time froze. After I saw her, that was the moment I knew I could finish. It affirmed in my mind that I wasn’t alone anymore, and even though she wasn’t running with me, she was there to let me know I was capable of doing hard things.

The final miles were not only a blow to my ego but to my body. In the middle of mile 10, my body began to lock up. I started walking miles instead of seconds. At mile 12, I sobbed as I called my husband to tell me to keep going. At this point, he could have picked me up in the car and we could have gotten in the car without anyone knowing I didn’t complete the half. Instead, he said, “you’ve done so many hard things in your life; make this one more.”

He was right. While it was on the list of the hardest things — surviving suicide attempts, getting out of bed in the morning and reaching out to get the help I needed when I wanted to give up — were much harder first steps. This race was a reminder that when I’m at my weakest mentally or physically, I hadn’t given up and it wasn’t time to give up now. After that call, I began to run again. I saw the finish line and knowing that he and my family were at the end gave me a surge through my body that momentarily made me forget about the pain. And, as I crossed the finish line, Michelle Obama’s words read to me through Audible came true: “at that moment it wasn’t about anyone else, it was about me.”

I completed the race that day. I took an hour longer than I planned, but it happened. I not only learned that I’ve done and can do hard things, but I am stronger than I remember most of the time. Even when plans go awry and life takes turns that take all we have to endure, it is possible to endure them. I, you, were made to endure, mental illness or not. And while continuing on may not take away the pain, it makes me stronger. With every obstacle, I become tougher and I learn something new about myself. I remember I’ve survived darkness to face the good and the bad of life. I’ve chosen to live, and part of that living is walking through every peak and valley in stride. Despite the long marathon of this life, the best part of facing new challenges is that I don’t have to do them alone.

I invite people in my life who cheer me on and people to remind me of how far I’ve come. They cannot do what I do, or complete each obstacle for me, but my ability to ask for support and ask for what I need in the moment reflects my capability to keep moving. I have the power to challenge myself, to face the unexpected and complete each race. I am going to continue running, ready for the next finish line to cross.

Discuss recovery strategies and reminders with the rest of the Mighty family by downloading our app.

Photo by Stage 7 Photography on Unsplash 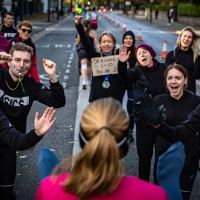