Why I Don’t Use Person-First Language

Recently, I was corrected and asked to use person-first language when talking about my autistic son.

If you are unfamiliar, person-first language means putting the person before the condition when speaking. In other words, I should say my son with autism instead of my autistic son. This has been dubbed the “politically correct” terminology by doctors, therapists, and teachers in the field of autism. This bothered me.

I choose to use identity-first language. My son is autistic. He doesn’t have autism. I understand why person-first language works for many things. You wouldn’t “say my Cancerous cousin” or “my Cystic Fibrosic nephew.” The difference, to me, is that these are illnesses. Autism is not an illness. Autism is not shameful. Autism doesn’t need a cure. It is part of their neurology. It is part of their personality and what makes them…them.

In the words of many autistic self-advocates, “I do not carry my Autism around with me like a suitcase. It is me.”

I thought to myself, “Am I doing this wrong?” I decided to take it to The Mighty and ask those #ActuallyAutistic. I asked my question using the new thoughts and questions feature. This feature has already proven to be very beneficial and enlightening. If you have a question you would like opinions on that involve a health or mental health issue and would like to know from first-hand experiences, I suggest this feature. I received an overwhelming response. Of those who were autistic individuals, the overwhelming consensus was that they preferred identity-first language. I wish more people asked what they wanted. I cannot ask my son because he has not found his voice yet. So, instead of listening to those who work in the field or even my own opinion, I am going to use the language that #ActuallyAutistic people prefer.

I have since spoken to a relative who took a class on Special Education and so far this semester all she has learned is to use person-first language. Since she was a close relative, I did send her information on self-advocates and identity-first language. I’m not going to correct everyone I encounter. There are more important things to worry about in the autism community. Although, I will continue to use identity-first language myself, I do however stress the importance of listening to self-advocates. They do have a voice — we just need to listen. 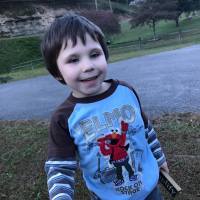