Starting school, making friends — that whole shebang is hard. For some kids, it’s easy and natural, but if you’re 5 years old and socially awkward, then it’s not likely going to go your way.

As an adult, I got diagnosed with post-traumatic stress disorder (PTSD), and I can’t help but relate it back all the way down to my childhood. Right back to the start. I was not one of those kids who found it easy and natural to fit in and make friends. I found it weird, uncomfortable and very, very difficult.

I grew up partially blind in a mainstream primary school. I was perfectly capable of joining mainstream schools, and it was probably more suitable for me academically… but socially? It was hell. I was an instant outcast because I didn’t look the same as everyone around me. Once the novelty of my little party trick wore off — how many other 5-year-olds can pop their eye out? — I was old news, and just back to being the little awkward “Billy no mates” in the corner. It wasn’t for lack of trying. I tried hard to make friends, but the thing is… I did not really know how.

I wasn’t much good at playing games; I’m still not now, so keep that Monopoly board away from me. I was too clumsy for running, and my blindness meant no hand-eye coordination, so no sports. I was imaginative, a reader and a writer, but they were very much solitary activities.

I was lucky enough to make one good friend, but as things usually do in primary school, this eventually went sideways and I had nobody. And then the bullying started. Don’t get me wrong; I know I was sensitive. I’m sure that didn’t help matters. But bullying is never OK, no matter what age group, no matter what form it takes. I didn’t always know I was being bullied, and this is something that has made trusting later in life incredibly hard for me; how can I know for sure that someone isn’t just gaining my trust to make a fool out of me later?

The bullying was emotional, and it was relentless. It was daily, and I was not built to handle it. Sure, there was other stuff going on (and a lot of stuff later in life) that contributed to the PTSD diagnosis, but I can pinpoint this is where it started.

I remember one school day so clearly, or rather after school. I came home from school, climbed into my parents’ bed, pulled up the covers, stared at the ceiling and cried quietly. I refused to speak to anyone. I refused to eat or watch TV. I wouldn’t do anything except lie there and cry. And this, to me, was the start of what has been a brutal journey with my depression.

It’s easy to think that we would’ve just ignored it. But in reality, we were turned away time and time again. Doors were slammed shut in our faces. We were told it wasn’t real; it was an excuse to skip school. The school responded to the bullying allegations by forcing the bully to sit with me and say sorry, shake my hand and walk off. Things worsened. They said it was separation anxiety, that I didn’t want to be away from my mum.

They said a lot of things.

The truth is they didn’t look. Nobody really searched for the root of the problem. Nobody tried to find out what was wrong with me. Nobody cared enough to try. It was easier not to search, because if they did, that may mean having to deal with the actual problem.

I can’t explain the level of disappointment I feel when I look back at how much I was let down by the school system, and by the medical teams we were seen by. Childhood depression is a real illness. Children can experience depression, anxiety and stress just as acutely as an adult can and left untreated, it can lead to lifelong conditions. Yes, children sometimes “fake” being sick because they don’t want to go to school, but instead of getting annoyed, we need to be looking at what they’re trying to avoid. And we owe it to them to investigate it anyway — to examine any stomach ache, headache, or sore throat – when any pain could be referred pain.

Our mental health services — our ability to diagnose and treat mental illness — have come a long way from my early school days. Don’t let your child suffer when they don’t have to. No child deserves to have to lose their childhood to depression and mental illness. 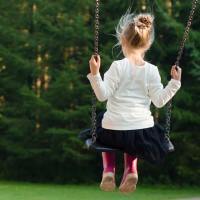