Actor and comedian Bob Einstein has died at the age of 76, according to his brother, Albert Brooks, who tweeted the news on Wednesday. Einstein was battling cancer, New York Daily News reported. The two-time Emmy winner played Marty Funkhouser on HBO’s “Curb Your Enthusiasm.”

Einstein appeared on the hit show from 2004 to 2017. Einstein was also the creator of the character Super Dave Osborne, a satirical stuntman whose stunts are never successful. The character appeared on multiple comedy series starting in the 1970s.

Fans and fellow actors reacted to the news on Twitter and shared their condolences.

Very sad. Got to work with him on #Curb. Had heard he was sick. Will never forget him telling @jerryseinfeld​ the dirty joke about the newlyweds. https://t.co/9Ch81VRHV5 via @deadline

We lost a friend today. ♥️ thanks for all of the laughs on Curb Your Enthusiasm. Our love to Bob’s family. #BobEinstein #SuperDave. The comedy world will miss you. pic.twitter.com/aLIjq8LoVP

Thank you for a lifetime of laughs, Bob Einstein.#RIPSuperDaveOsborne

Absolutely gutted over news over Bob Einstein. Bob, you were too kind and funny for words. 2019 off to a heartbreaking start. Horrible.

This article will be updated as more information becomes available.

Share
or  Copy Link
Link copied to clipboard.
Be first
253 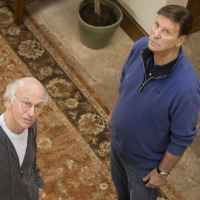