When Your Health Changes Your Life Yet Again

In November 2017 I began writing for The Mighty. At the same time, I also launched a personal blog to share my heart while I live with chronic illness. Over the next 9 months or so I was on fire. My words flowed from my fingertips effortlessly. I remember a day where I took a bath and wrote two articles before my bath water cooled; both of those articles were published. I felt so alive during that time, not just because I was receiving recognition, but because it felt like I was self-actualizing. Like I was stepping further into myself.

But then things began to change.

I didn’t see it coming. Maybe I should have, maybe I knew it was coming; my intuition isn’t always clear. What proceeded to happen over the last five months is hard to put into words. My mind has gone offline a few times.

I’ve experienced brain fog for years, that’s nothing new. What I began experiencing were reboots, like I was just going along and suddenly my thoughts would completely freeze and I’d lose my place. Sometimes this felt like simple forgetfulness, but other days I could swear I felt it coming and my body would acknowledge it — almost like panic was setting in, then reboot.

The night I realized I was missing time during these spells, I sat up straight and finally gave this my attention. I have so many health conditions, and I’m also the mother of three small children, so forgetfulness, tardiness and extreme fatigue are not out of the ordinary, certainly not when you have Ehlers-Danlos syndrome and a host of associated disorders.

I was leading an online MLM party one night; the way it’s designed is that you post graphics at certain time intervals. I find it easiest to set alarms, since it can be fast paced if people are super involved. I remember sitting at my desk typing messages, and then bam, it was time to post the next graphic, and I had multiple notifications from the event. Huh, that was weird — guess time was passing faster than I realized. But it didn’t stop there.

I had plugged in my phone in my room, and remembered I needed to go grab it. Once I got in there everything reset again. I sat on the edge of my bed and swiped through my phone a little bit, just to have another  alarm go off in my office. How did I completely forget I was doing a party? All urgency was completely gone.

I was confused, but instead of processing all of this I just went through the motions of my party and then checked out for the evening. I was extremely tired, but my body was restless and I had more tremors than usual, so I fell asleep watching shows on the couch so I wouldn’t bother my husband. The next day my husband woke before me and was out visiting his clients. I woke up feeling extremely tired, but slowly collected the pieces. I messaged my husband, “I think I had a stroke or a seizure last night. It’s all really fuzzy, I don’t know how to explain it.”

From there I’ve had a lot of clarity, but also a lot more confusion. I’ve had a dozen more episodes now, of various kinds. I’ve recognized that these episodes have likely been going on for over a year (They are being categorized as seizures.) I’m under the care of a few specialists now. Let me just say, you know your case is complicated when a specialist suggests you need to be seen by a university medical team. But this doesn’t overwhelm me anymore.

You know what I’ve come to realize? I am not a lesser writer, artist, woman, mother, wife etc. because of my health. I am affected by it, I am not defined by it. My health has changed my life drastically, but it has only made me fight harder to tell my story. If those of us suffering are silent, how will we ever uncover cures and treatments? These illnesses have changed my life, but I refuse to believe they have ruined it. My life is more than skin deep. 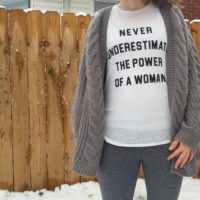