As a patient advocate and founder of the Don’t Punish Pain Rally organization, I was routinely asked why we didn’t have a national television commercial.

I knew going into the third Don’t Punish Pain Rally on January 29 we would need to pique the interest of both the general public and the pain community.

Not being able to receive pain medication was no longer only a “sick” person issue, but, clearly, was becoming an “every person” issue. Although my Department of Health worked with me in 2018 on a “Compassion Bill,” I knew it was essential in 2019 to have legislation sponsored to further protect the patient/provider relationship.

In order to be effective, the protest, the legislation, and the commercial would all have to occur during the month of January.

The only way this issue could be tackled on a national basis would be with a national television commercial.

One of the members of the DPPR (Don’t Punish Pain Rally) opened a GoFundMe account and they were able to raise $8,000 in a matter of days. The 15-second spot was made at a television station in Providence, Rhode Island. The commercial was posted on social media and was shared, thankfully, thousands of times.

After Fox News released their three-part series called “The Other Side of the Opioid Crisis,” we decided to run the commercial on Fox. We’re hopeful this commercial will reach several hundred thousand viewers. The national GoFundMe was closed and members are now raising money selling DPPR T-shirts and bracelets to assist with the cost of air time to run the spot on their local television stations. 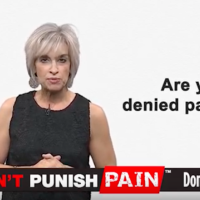