How My Father's Schizophrenia Changed My Relationship With Beards

The last time I saw my father without a beard was the night he accused me of being an alien sent to harvest his testicles. It was the summer before I entered eighth grade.

My father’s mustached face was otherwise smooth. Always had been as far as I knew. I remember kissing his cheeks as a child. Avoiding the scratchy upper lip hair.

Now, my father’s cheeks were blushed with anger and fear. I lost myself staring into his terrified eyes.

That night was the culmination of months of odd behavior. Standing outside at my sister’s Girl Scout summer camp, my father screamed accusations at everyone. His family had been replaced by testicle harvesting aliens. The other parents were FBI agents who’d been stalking him at work and recording his thoughts for months. Even the gaudy pink flamingo lawn ornaments decorating the campground weren’t safe. Didn’t the Girl Scouts know God lived inside the pink flamingos?

I’d always known my dad was a little odd. Unknown to me was his diagnosis of schizophrenia. He had disappeared a few times for no reason. Usually my sister and I would end up staying a few nights at my grandparents’ house. My mom would buy us new toys. My dad would eventually reappear. Things returned to our version of normal.

This time I knew exactly why my dad disappeared. He was going to the mental hospital. The “loony bin.” My dad is certifiably crazy, teenage me thought. Worse, other people knew it. Other teens! Complete strangers.

This last image of my father without a beard is seared into my memory.

The bearded stranger talked to himself out loud in private and public. He cursed and gestured wildly at random times, crossing himself with vigor as he watched Catholic Mass on TV three times a day. We weren’t Catholic. The bearded man spent evenings and weekends shopping for pornographic movies that sat unopened and unwatched in haystack shaped piles in our basement.

I daydreamed of shaving my father’s beard. Peeling off the stubble to reveal the man he had been before having a beard. The father I felt like I no longer had.

At the time I wasn’t able to grow my own beard. That didn’t stop me from making a pact with myself — I would never grow a beard, damn it.

As an adult, I didn’t have a beard or a meaningful relationship with my father. I became a father myself. I vowed to never put my children through what I had gone through: a childhood filled with an empty father.

I didn’t keep my father from having a relationship with my children. He proactively visited them even though we lived in another state. I saw his odd behavior as a personal slight. My children didn’t seem to notice. I tolerated his presence. They enjoyed spending time with him.

I treated lingering depression and anxiety with antidepressants, sporadic counseling and another illness: alcohol abuse.

Alcohol abuse had me failing at life. I frequently drank until I blacked out. I was divorced and only seeing my kids every other weekend. I tried to wash away my bitterness and guilt with alcohol. Instead, I found myself on an alcohol-fueled ride to my rock bottom.

The last time I remember not having a beard was the last time I remember drinking alcohol. I had an appointment with a new counselor. He said he wouldn’t work with me if I didn’t stop drinking. Nothing could improve if I kept drinking. I heard him. It wasn’t the first time a counselor had said these words to me. I also heard what he wasn’t saying: things could improve if I stopped drinking. I went home and drank a six-pack of beer and decided it was my last.

It wasn’t easy to stop. Every minute of every day was hard at first. I didn’t have the energy to do anything other than attend AA meetings and counseling. Without thinking I’d stopped shaving and grown a short beard. At first it brought me comfort in a tangible way: I’d rub on it and scratch it and twist the hairs. After a few weeks it started to fill in. So did my sobriety. My beard grew thicker along with my willpower.

My life improved quickly as I re-channeled the energy I’d spent on drinking into more positive endeavors. I remarried and had another daughter. I talked to my wife about my bitterness towards my father. She helped me see I would never fully move forward if I didn’t attempt to forge some type of personal relationship with my father.

At some point I made the first proactive phone call to my father I’d ever made. It wasn’t a magical conversation, we talked about sports and the weather. I hung up the phone sick to my stomach. I knew it was on me to deal with it. I wanted to have whatever relationship I could with my father.

I’m four years sober. In these four years I’ve searched my soul to forgive my father. My children love my father. They don’t know the bearded stranger I knew when I was growing up. They’ve never known him without a beard. They only know him as grandpa.

I can’t regain my childhood. I can’t undo what I’ve done to my children. I can make sure I don’t go back to the dark place of alcohol abuse.

I kiss my children with a beard. I cuddle my youngest daughter and tickle her with my whiskers. She’s never known me without a beard. My kids see beards in a different light than I did.

Photo by Jeremy Perkins on Unsplash 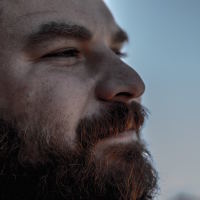