The Comment I Don't Want to Hear About My Toddler's Walker

Taking a toddler out anywhere is a challenge. Add in some developmental delays and sensory processing disorder and it can make public outings a challenge.

It takes preparation to take my son out of the house, not to mention the physical prep of loading his walker, stroller and carrier (need mobility options), packing gtube supplies, and several changes of clothes.

Does your toddler fight against you when you put him or her in their car seat? Cool, mine too! I’m sweating and we haven’t even left the house yet. However, the need to go out and explore is pertinent, so we proceed with our plans.

I chose a relatively safe outing — a JV football game to watch a family friend cheer. Not too many people attend JV games, and the ones who do are parents or teens, so it is seemingly safe because chances are no one will be focused on Jack and his walker. When I take Jack out in the world and he uses his walker, he tends to attract a lot of attention. I get it because he’s adorable, right? I mean those chubby cheeks, could stop anyone in their tracks! And I understand that walkers and gait trainers are much less commonly seen, especially being used by a toddler. However, no matter how much I understand, I would prefer people not comment on my son’s medical equipment if they haven’t thoroughly thought their comment through.

Most people want to cheer Jack on and tell him how well he is doing. I love the kindness shown towards my little fighter, but Jack gets overwhelmed when strangers speak to him. He has been known to break down in tears and is unable to walk any longer, so I have to pick him up. Most often, however, when a stranger speaks to or at Jack, he does what I like to call “the turtle,” which is basically Jack completely crouching down inside his walker as if it’s his protective turtle shell.

Many people don’t understand sensory processing issues, so they don’t quite register that while they are being kind, they are also scaring my son. Other obstacles for Jack include doorways and grates. If you ask Jack, neither are to be trusted.

I relish being out in the world with my son, my incredible kiddo whom I was told was going to die in infancy. So we celebrate every single inchstone, no matter how difficult it was to get in that 2 minutes of glory!

In addition, there are also the less thoughtful comments that are made from time to time. I’m pretty gregarious, so I typically welcome comments and questions; I will take any opportunity to spread a little awareness.

There is one very specific comment that stands out in my mind that still completely blows my mind when I revisit it. It was not cruel outright, but the pain it struck in my heart certainly felt that way.

My 6-year-old daughter and I were excited to take Jack Jack to the JV football game with us because he would have plenty of room to explore with his newfound independence thanks to the walker. It started out a little difficult when I couldn’t find an accessible parking spot. Can you imagine holding a 2-year-old and his walker? Jack still couldn’t independently stand or walk, so it’s not like I just set him down.

I can usually be seen doing a run and shuffle to get all of Jack’s supplies into whatever outing we are on. It’s a beautiful disaster to watch, I’m sure. I remember wondering if we would see another kiddo with a walker or if the accessible spots were all taken by grandparents. Per usual, it was the latter. We finally made it down to the field and in front of the cheerleaders we were there to see. It could not have been a more perfect set up. There weren’t many people there and the ones who were there all remained seated in the bleachers. Jack had so much room to explore without running over toes or bumping into a wall. It was glorious for me because I could take a hand off his walker and let him truly be the guide of where he wanted to go. I was able to love on my daughter and show her the attention she usually lacks. I was so happy that I had solo ventured out with both kiddos and the walker.

I was beaming until this lovely new father busted my bubble by reminding me how different my son is from what is considered “normal.” There was Jack having the best time out in public. The seemingly new father (ya know, goofy ear to ear smile and can’t take his hands off the bouncing bundle) had been sitting close to us when we sat down and obviously had taken notice of Jack. While Jack was 2 at the time, this man’s infant couldn’t have been more than 9 or 10 months old. He was around us here and there throughout the game; I know we smiled politely at one another. At the end of the game, this father decided to speak to me. Cradling and beaming at his infant, he said, “Man, if she had one of those then she would be gone!” So to be clear, the “one of those” was Jack’s walker. I’m sure anyone can notice that it doesn’t look made by Fisher Price. I thought silently, “I hope she never needs one.” 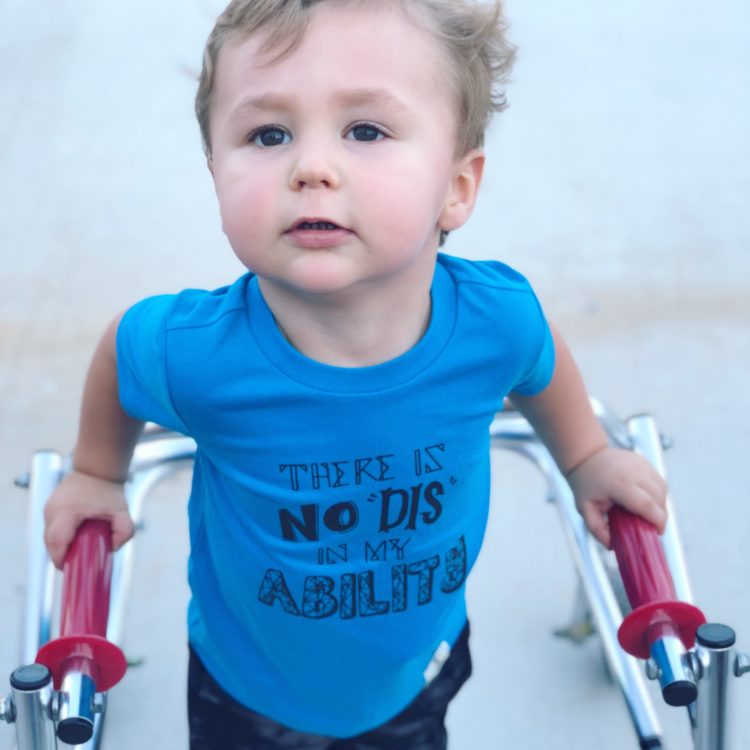 I know my son would appreciate the silent smile or sweet head nod over speaking straight to him. He cannot communicate as readily as most kids and doing two difficult things at once is almost impossible for him. Jack can’t both walk and talk; it requires all of his concentration to do both activities, individually. It’s such a privilege to be able to move and speak as you wish. It’s so important to use those actions and words wisely by letting kindness and compassion be the guide.

It took all of my energy to get my medically complex son out where he could explore like other kids his age and I could feel the warmth of community again. Instead of being filled with hope, one comment left me deflated and feeling even more isolated than ever.