Thoughts on Being 38 and 'Childless'

My first thought is that I hate the term “childless.” It feels quite bleak. But I’m not sure what else to use. “Childfree” is the wrong tone for me, and so I’ll stick with this for now.

Approximately one in five women in the U.K. does not have children, either by choice, circumstance or because they’re unable to have children. That’s a huge number, but I can tell you, as one of them, it really doesn’t feel as though there are so many of us.

I feel overwhelmingly outnumbered even though I have close friends and family members also without children.

A few thoughts on how I feel being 38 and “childless”:

1. I want to know about your child. I mean, only if we’re friends, of course. If I don’t know you, I’m less interested. Tell me how they’re growing and developing and what that feels like. There seems to be a shared understanding of these things between mothers — even though experiences differ wildly — that I am entirely locked out of. So tell me. Don’t assume I know that little Primrose can now count or get dressed on her own. I don’t know what children can do at different ages.

That said, let’s also talk about other things. Otherwise, it’ll inevitably end up being a very one-sided conversation, as interested as I am.

2. I have a lot of love to give. A lot. I fall in love all the time with cats I meet on the street, dogs in the park, even other people’s kids. My capacity to love is vast. At least that’s how it feels to me. Perhaps that enormous well would be entirely poured into one child. I hear all the time that I’ll never know a love like it so I guess that’s what that means. But I need to find other things to love — for the sake of my smothered husband and cats, I really do.

3. I am not sure I would have been OK as a mother. I know I would have loved the hell out of any child, but I cannot imagine the level of anxiety that comes with loving something that much. I am in awe of every mother I see who takes her eyes off her kid for one minute.

4. I am in too much pain to be a mother. This one is tough for me to say. Living in chronic pain means my daily pain levels are such that I think I would have struggled to care for another being who was wholly dependent on me.

5. I have learned to be OK with not being a mother. Most of the time I’m OK. We did the usual fertility treatments and the rounds of IVF, and I am 100% certain stopping when we did was the right thing for us. It’s a brutal thing to endure all that hope.

I will not undergo any more IVF, but that doesn’t mean I didn’t want a baby. Don’t tell me to adopt; it’s not the simple “fix” you think it is.

6. I feel guilty. Obviously, I feel guilty for not making my husband a father. But I also feel guilty at work for all the free time I’ve had over the weekend. I feel guilty I have a non-working day in the week that doesn’t revolve around childcare.

I also feel guilty when I’m told I’ll never understand the love between a mother and child. Why do I feel guilty about that? I don’t know, to be honest. I guess I just can’t win this game.

7. I add value to the world. I have to remind myself of this so often to counterbalance the shame of being “infertile.” Our society doesn’t recognize the value of childless women easily. There are very few seminars on work-life balance for non-mothers, very few local community social groups that aren’t all about being a mum (I’m interested in local crime and pizza too, guys).

I’m acutely aware of wanting to have and to add value. I just have to work that bit harder to find and create my legacy, although, in all honesty, it’s likely to be a sanctuary full of love-drenched rescue donkeys. 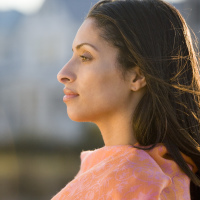