Is the Voice of My Eating Disorder the Same as Yours?

For me, the voice isn’t distinctive from my normal thoughts. It sounds no different to the thought processes I have when deciding which movie to see at the cinema. But it feels different. It’s intrusive, insistent and unreasonable. It’s an internal argument that leaves me confused and disoriented in a way that doesn’t happen when trying to decide between seeing “How to Train Your Dragon” or “Ralph Breaks the Internet.” There’s no right or wrong, but once a decision is made, I don’t fret. I just go to the movie.

My eating disorder voice has a distinctive underlying tone of cynicism, judgment and despair. The choice is wrong, no matter what. There are whispers of my mother and grandmother in the voice, but I’ve fine-tuned it over the decades to be so much more than their criticism and chastisement ever was. I’ve absorbed their insecurities and amplified them into a monster that’s never appeased.

It’s also cunning. I can’t distinguish common sense when it comes to gastronomic decisions. I can apply common sense to almost every other area of my life, and to the eating choices other people make. But when faced with a decision about lunch, a flurry of possibilities rain down and they all become simultaneously acceptable and distasteful. I hear the internal monologue and can’t tell on which side the angels and demons sit, or if indeed they’re on both sides together or none at all. When asked a simple question like, “Do you want lunch?” I don’t know the answer. Do I? How can I tell? Should I? I have no idea.

The eating disorder voice convinces me to binge, purge or restrict and insists no other option is acceptable. It rushes me before something comes along to change my mind. The eating disorder voice is determined to undermine recovery. I have to ignore it, but as it sounds no different than the voice of reason and common sense; ignoring it isn’t as simple as it may seem.

When decision making is taken away, the voice is quieter. It’s still there — making judgments and inducing anxiety — but there’s no argument over what to do, so it’s a quieter battle. But, I can’t have my eating monitored 24/7, so learning to manage the doubt and insecurity is part of recovery.

During my hospital stays, I chose to trust the team in charge of my eating. The voices would challenge me, but I allowed myself to trust the professionals – if I didn’t, why bother going through the stress of an inpatient stay? When I was discharged, I had to trust my husband and friends to help me with indecision. It’s not easy — sometimes, I disregard their logic and suggestions. Sometimes, I listen. But I learned, particularly in the early days after my hospital stay, that routine was my best friend. Routine didn’t shut the dialogue up — I doubt anything ever will — but it gave me something external to trust and that was a saving grace.

It’s over a year since I was admitted to the eating disorder clinic and gradually the incidence of binging, purging and restricting has dwindled away almost completely. It’s normal for me to eat every day, and extremely rare for me to binge, purge or restrict. I’m still consumed with fear and anxiety around my weight and appearance. I still have an internal monologue about all my food decisions, but with regular eating, the monologue is quieter. The urge to compensate for eating, less overwhelming.

My recovery is progressing. The eating disorder voice is just me — my normal thought processes, but twisted and corrupted by a lifetime of learned attitudes and behaviors, and now indistinguishable from common sense and healthy thinking. It’s an indistinct voice, with distinctive feelings fueled by destructive agendas.

Will I ever be rid of it? I doubt it. Can I learn to work around it? I’m getting there. 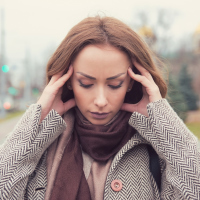