The Lonely Side of Tardive Dyskinesia

In 2016, I was diagnosed with tardive dyskinesia (TD) around the same time I was diagnosed with trichotillomania. Tardive dyskinesia is an involuntary movement disorder that causes uncontrollable movements to your face, limbs and torso. Trichotillomania is a body-focused repetitive behavior (BFRB) where you pull out your hair, sometimes during times of high stress. For me, my trichtillomania tends to flare up at the same time as my TD episodes. Sometimes it’s just the twitching. Sometimes it’s verbal tics. Sometimes it’s both.

I try to avoid people during my episodes. It doesn’t matter if it’s a physical episode, a verbal episode or both. I get anxious about having episodes in public to the point where I rarely go out. I just moved to a new area in November, and haven’t really made friends aside from a couple of people. Mainly because I don’t want to have to explain my twitching, my tics and why I wear wigs. I tell myself the less people I have to explain myself to, the better.

I keep to my music, my writing and my sewing. I hate the lonely feeling, the seclusion, but it’s by my own choosing at this point. People tend to understand — until I have an episode in public. Or until I have to cancel plans due to having a bad day with my neuro-stuff (which can include me dropping everything, stuttering or full episodes). Small episodes put me down for almost a full day. Larger ones put me down for three to four days. It affects my concentration, my appetite, my sleep… everything.

I tell myself that if I don’t let anyone into my life, they won’t be burdened by my problems. But I’ve learned that keeping yourself secluded isn’t healthy. Instead, try to surround yourself with friends who understand, who when you say you’re having a bad day with your condition, know what you mean. The loneliness will eventually eat away at you — and you deserve to live.

Share
or  Copy Link
Link copied to clipboard.
Be first
9 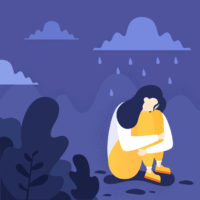