I just met a coworker who recently found out that his 10-year-old daughter was diagnosed with type 1 diabetes.

He asked me if my life was hard because of my diabetes.

How could I answer that?

How could I tell him that with that diagnosis her life was completely changed? That soon she would measure time as “before diabetes” and “after diabetes.” That his
entire family would be affected by the disease?

How could I tell him that she would have to grow up faster than other kids? That soon she would know a new language comprised of words like carbs, boluses, basal rates, A1C, glucagon, and much more?

She will learn to see people first and “disabilities” second. Because of her diabetes, she will learn empathy for others. I told him about my amazing diabetic friends that I have met that are all doing incredible things and just happen to be diabetic. She will learn she is not alone in this fight. I told him that she will learn not to be defined by the disease and she can do whatever she sets her mind to.

And then later after I left him, I cried for her. 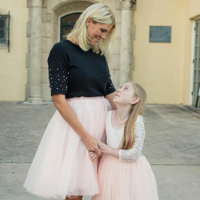