'BoJack Horseman' Validated the Pain of Losing My Grandmother to Dementia

The reaction was instantaneous. With that simple admission, my friends stopped what they were doing and watched me with wide, disappointed eyes. Before I could defend myself, my beloved pack of friends were already exchanging the various merits of the Netflix show I’d been neglecting.

“…but it is about a personified horse, right?” I asked, brow furrowed in confusion. “I’m not misinterpreting this?”

I nodded incredulously and returned to the butternut squash on my plate. A cartoon. About a horse. I failed to see the genius. And yet, I went home that evening and stared at my laptop screen, contemplating just how deep the show could possibly be and how this show would, as my friends had informed me it would, change my life. A few weeks passed, I had nothing to do, and so I hit “play.” It didn’t take me long to discover that my friends were, of course, absolutely right. This was a show that, based on trailers and clips and screen captures, I had never had the impulse to try before. But that’s the deceptive thing about “BoJack Horseman,” a cartoon about, yes, a horse.

It’s so much more than a cartoon about a horse.

BoJack, we learn, is a sitcom legend, best known for his run as the lovable patriarch on the classic 80’s show “Horsin’ Around.” As the show progresses and we see more of BoJack’s life, the show becomes intensely more profound, leaving the viewer little choice but to hang on and journey with BoJack through his temporary triumphs and every eventual failure that follows. We can’t say that we’re rooting for him. He’s, at his core, a deeply terrible person (horse?).

But we’d be lying if we said we didn’t understand him.

That moment of understanding for me came during season four. By this point, we’ve met BoJack’s family. His father was abusive, turning to alcohol in moments of weakness. His mother was coping with her unsuccessful marriage the best she could, which meant she took her frustrations out on her son. So it’s a bit of a surprise, when we discover that BoJack’s mother has some form of dementia, that it stings in a deeply personal way.

Maybe it felt that way because I lived it myself.

One of the first people to ever love me was also the first person to ever forget me. My grandmother, a short-haired immigrant from the little-known town of Frosinone, Italy, who loved her family fiercely, was one of my best friends. (Understandably, at the age of 4, my choices were pretty limited. Still, my Nanny, as I called her, would’ve been in my crew no matter the options.) Together, we would sit on the couch and watch episodes of Batman, a bowl of soggy Cocoa Puffs sitting in our laps. We would bake with flour-dusted hands, singing songs in joyful Italian, her pronunciation worlds better than my attempt. She’d send me to her meticulously-cultivated garden with a small woven basket and ask me to pick tomatoes that she had grown herself — and wouldn’t even judge when I’d come back with an empty basket and a stomach full of tomatoes.

(She also didn’t judge me when I proudly proclaimed that I preferred the unripened green ones to the red ones.)

As I got older, something I was not yet capable of understanding in our relationship began to change. The songs stopped. The closeness stopped. Even the language stopped — all the English my grandmother had learned since coming to America slowly began to elude her, replaced by a sad and confused yet familiar dialect of Italian. She was moved out of my parents’ house in Jamaica Estates and into a nursing home for reasons that were never explained to me. What I did notice though was that the light of recognition was gone from her eyes.

I was a stranger who came to visit, anxiety and dread rushing through my veins where there was once nothing but affection. My Nanny became someone foreign to me. And I, her Lorena, her principessa, was never coming back.

The thing about that episode of “BoJack Horseman” that struck me the most was that finally, someone out there, someone I didn’t even know, was able to take this disease that had affected me so terribly and (quite literally) illustrate it for everyone else. BoJack’s mother, Beatrice, was the star of this episode. She sits in the center as her story is told, surrounded by people whose faces are vacant or scribbled over with marker. She knows the fuzzy details, she vaguely remembers the places, but the people in her story are slowly drifting into nothingness. As the episode continues, the details begin to look a little stranger until you’re wondering — is this reality or is this what Beatrice has come to believe as reality?

This episode didn’t remind me of all I had lost. This episode, instead, kindly let me know that someone out there understood. For the first time, someone was able to reach through to me and tell me that I wasn’t alone — and maybe, even more importantly, being forgotten by someone I loved was not my fault. It was a message I’d needed to hear for two decades but no one knew. I never spoke about my grandmother in such a candid way. No one knew of my childhood where I watched the woman I loved slowly deteriorate into someone unfamiliar to me. I hadn’t even realized just how heavily the loss of my Nanny weighed on me, the memories of her and the guilt associated with her loss walking hand-in-hand with me wherever I went.

Because of “BoJack” and because of its fearlessness to tackle unspoken, taboo subjects, I didn’t have to say a word. This show was there for me, whether I was ready to talk about it or not.

It’s safe to say that I hadn’t expected this show to help heal any ailments of mine, whether recent or from long ago. But that’s the beautiful thing about “BoJack Horseman.” Whatever you’re struggling with  whether it be addiction, failure, sexuality, morality, loss, infertility, whatever — chances are, there’s an episode touching upon that subject. And though it would’ve been so easy for the writers to make a joke of the suffering of others, and though many shows before this one have done just that, “BoJack Horseman” takes its viewers — and their pain — seriously.

We’re all here. We’re all suffering. We’re all human. And this ridiculous show about a horse that I had so harshly judged isn’t afraid to look at those sticky subjects we’ve avoided for so long, those subjects we’re just not ready to talk about, and say, “I hear you. I’m with you. We’re walking through this together.” 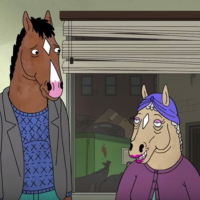