Similar to other Crisis Text Lines, users who need mental health support can text SHOUT to 85258 for confidential help 24/7 via text messaging. The service is completely free and open to anyone in the U.K. Text messages are answered by trained volunteers who are supervised by mental health professionals. Shout is based on the same protocol and technology as the Crisis Text Line in the U.S.

The Crisis Text Line launched in the United States in 2013. Kids Help Phone, the Canadian version and first international iteration of the Crisis Text Line, went live in November 2018. Since its inception, a press release reports the text line has handled more than 100 million messages. According to Shout’s website, before going live it was piloted with a number of mental health charities in the U.K., including Young Minds and Place2Be.

In 2017, the Royal Foundation provided a grant to establish Mental Health Innovations (MHI), a charity dedicated to developing technology to support mental health initiatives in the U.K. MHI’s first major initiative was a Crisis Text Line. Shout began recruiting and training volunteers in 2018, and is still looking for people to help out.

The Duke and Duchess of Cambridge and the Duke and Duchess of Sussex have made mental health awareness a large part of their platform. This has included initiatives like their Heads Together campaign, which aims to reduce stigma and provide access to treatment. According to a press release, the Royal family hopes Shout will support these goals.

“We are incredibly excited to be launching this service, knowing it has the potential to reach thousands of vulnerable people every day,” said the Duke and Duchess of Cambridge and the Duke and Duchess of Sussex in a statement. “Over the last few months Shout has started working quietly behind the scenes. We have all been able to see the service working up close and are so excited for its future.”

Share
or  Copy Link
Link copied to clipboard.
Be first
775 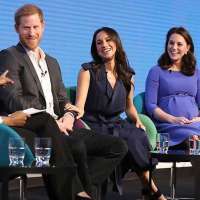