Getting sick is no laughing matter, but it often takes humor to be able to get through the ups and downs of chronic illness. While some of these comics make us laugh out loud in pained affirmation, mostly they raise awareness of chronic illness, and shed light on what it is like to live with a vast array of symptoms and severe pain.

If you have a chronic illness, you know that struggle is part of the journey. From not having a diagnosis, to not knowing what your diagnosis means, to becoming intimately aware of what it’s like to be chronically ill, these artists have nailed every step of the journey.

If you’re struggling with a chronic illness, these comics may help you feel like you’re less alone in your journey. Plus, they can be a great way to raise awareness and show your family and friends what your daily struggle is like.

Read on to see how these illustrators made art imitate life in these nine comics about chronic illness:

1. ‘The M.E. Adventures’ by Laura Chamberlain 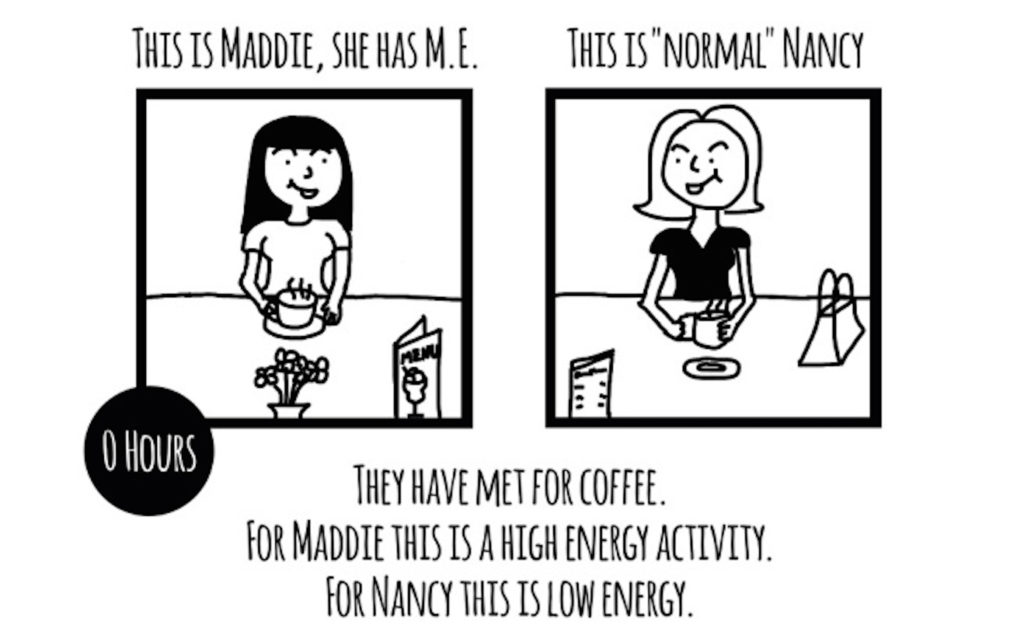 Chronic fatigue plagues many in the chronic illness community. Friends and family may wonder why the chronically afflicted are always so “tired.” Laura Chamberlain’s comic, “The M.E. Adventures,” points out that those with myalgic encephalomyelitis (ME), formerly known as chronic fatigue syndrome (CFS), are not simply tired, they are chronically fatigued – and there’s a difference.

Chamberlain’s side-by-side tale of a girl with ME named Maddie, and a “normal” girl named Nancy, communicates how fatigue impacts Maddie’s day. Maddie’s day is compared and contrasted with her friend Nancy’s. Nancy, like any healthy girl, gets tired at the end of the day and goes to sleep. Contrast that with Maddie, whose ME is evident after her single meeting with her friend, Nancy.

In the end Nancy is able to get on with the rest of her day’s tasks, while Maddie experiences something called post-exertional malaise (PEM). After exerting themselves, those with ME can experience PEM. PEM is a worsening of symptoms that kicks in 24-48 hours after exertion, and can last for days, weeks, or even trigger a relapse.

See the full comic here. You can follow Chamberlain on her blog, Laura’s Pen.

2. ‘Fibromyalgia and Us’ by the University of Dundee 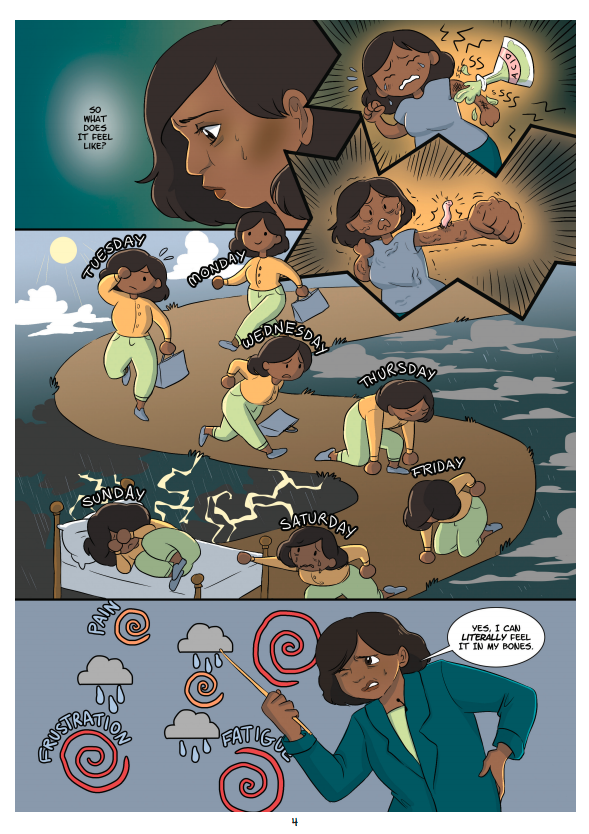 It can be frustrating to have a chronic illness when even doctors don’t understand your condition. Divya Jindal-Snape, a fibromyalgia patient, knows this frustration all too well. She came up with the idea to create a comic to spread awareness of the condition after a pain clinic psychologist told her more needed to be done to make health professionals aware of fibromyalgia.

The comic, “Fibromyalgia and Us,” was created in collaboration with the University of Dundee’s Scottish Centre for Comic Studies, Ink Pot Studios, Christopher Murray of Comic Studies and, of course, Divya Jindal-Snape of the School of Education and Social Work.

Jindal-Snape created the scripts for the comic by interviewing fibromyalgia patients, family members and health professionals.

“It is more engaging and powerful than a standard leaflet which contains information about fibromyalgia — of course they are important too, but usually read by those directly affected by it,” Jindal-Snape told The Mighty. “I wanted to create something that would be attractive to others, too.”

Learn more about the creation of “Fibromyalgia and Us” here. You can download the entire comic here (click on “Final Published Version”). 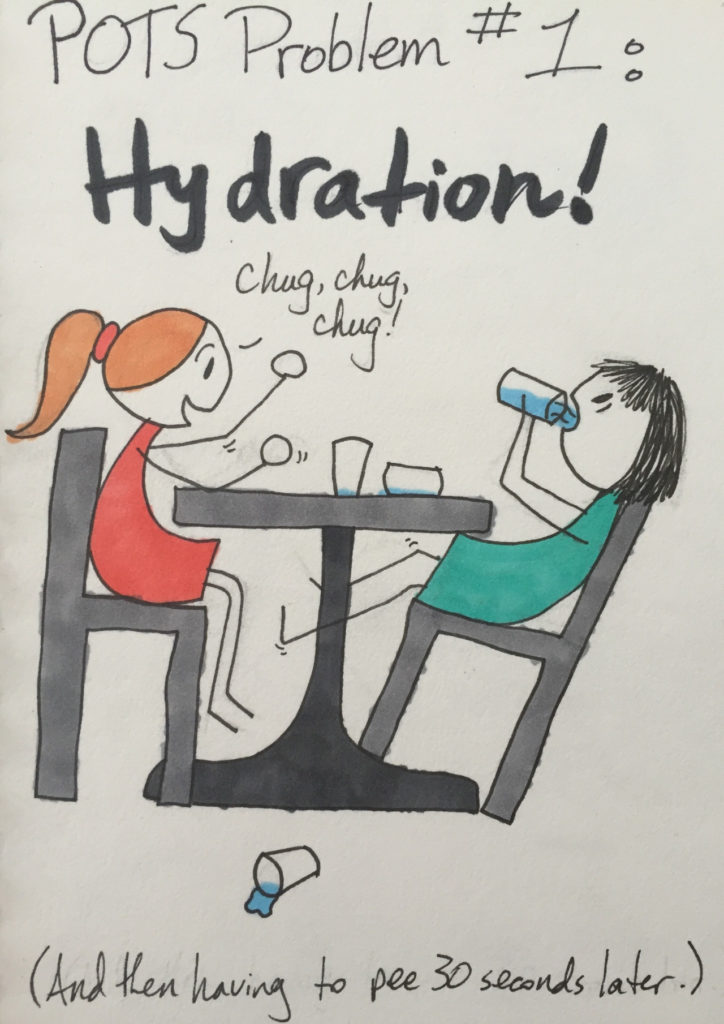 Many people with chronic illness go through similar challenges. Vanessa Matelski, known as “POTS and Spoonies” on social media, noticed that people living with postural orthostatic tachycardia syndrome (POTS) were posting the same questions over and over on Facebook. She decided to draw out the issues in her “POTS Problems” comic along with a description of her experience.

“I thought it would be kind of fun to visually depict those,” Matelski told The Mighty. “I also thought it would be an engaging way to share what I’ve learned about this condition because most doctors have never even heard of POTS, so patients often have to look outside their local medical practice to find answers.” 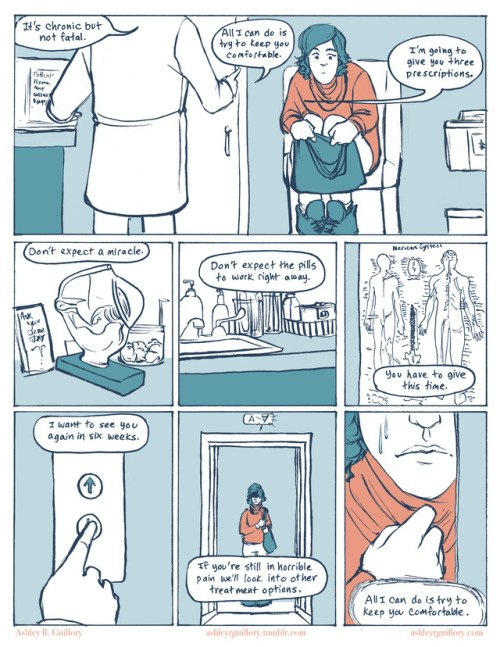 Ashley Guillory’s comic about living with interstitial cystitis (IC), an inflammatory bladder condition, is a culmination of her personal experience with the disease along with her developed gift of comic crafting.

“I’d been looking for a way to express what I’d been through my IC diagnosis in a way that didn’t ask for any pity,” Guillory told The Mighty. “I knew it needed to be a comic – I’ve my MFA in comics, and find them the best media for autobiographical narratives – but every time I started writing the script it looked like a sob story, which I was trying to avoid.”

Her story spans over nine pages of multiple-panel sequences. Each panel features detailed drawings and descriptions of everything from seeking a diagnosis to her current-day struggles of living with IC. Guillory, a comic artist by profession, hopes to be able to create this comic again after she has been living with the condition longer to see how her feelings have changed.

5. ‘I Am a Migraine Vampire’ by Lizz Lunney 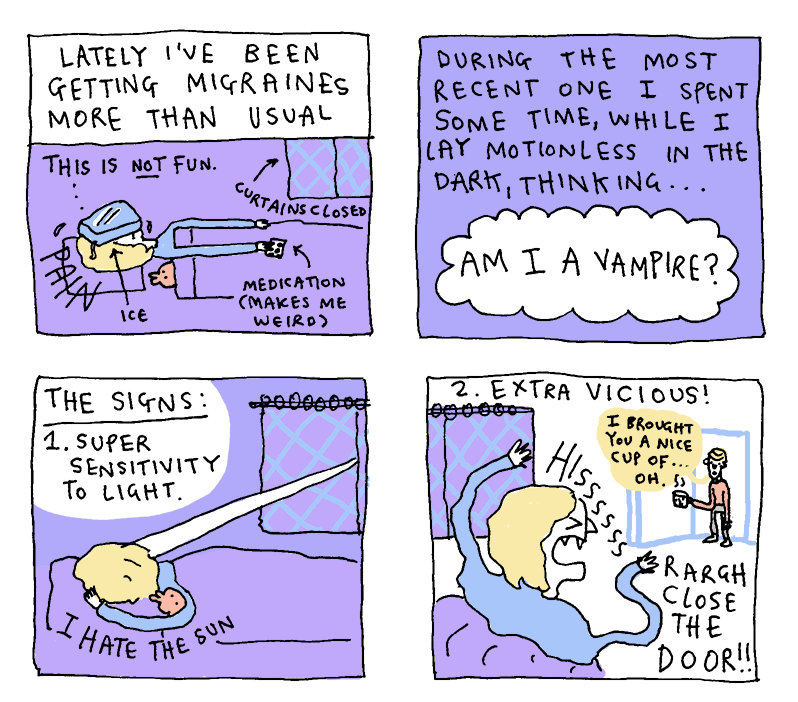 Illness transforms you. When Lizz Lunney noticed that her experience of living with migraine seemed to be slowly transforming her into a “vampire,” she decided to draw it.

Like a vampire, Lunney experiences sensitivity to light, vicious moods, pale appearance, nocturnal lifestyle, craving for meat, sensitivity to garlic, inability to be in public and a desire to wrap herself in a cape-blanket.

Lunney, a Berlin-based artist, featured her first comic panel on her Instagram page, where she displays much of her creative work.

Lunney told The Mighty she has had migraine as long as she can remember, but this cartoon was based on a particularly bad migraine attack she had once.

Learn more about the creation of “I am a Migraine Vampire” here. You can see more of Lunney’s artwork on her website and Instagram.

6. ‘DoodleThru’ by Jill and Mike Brook 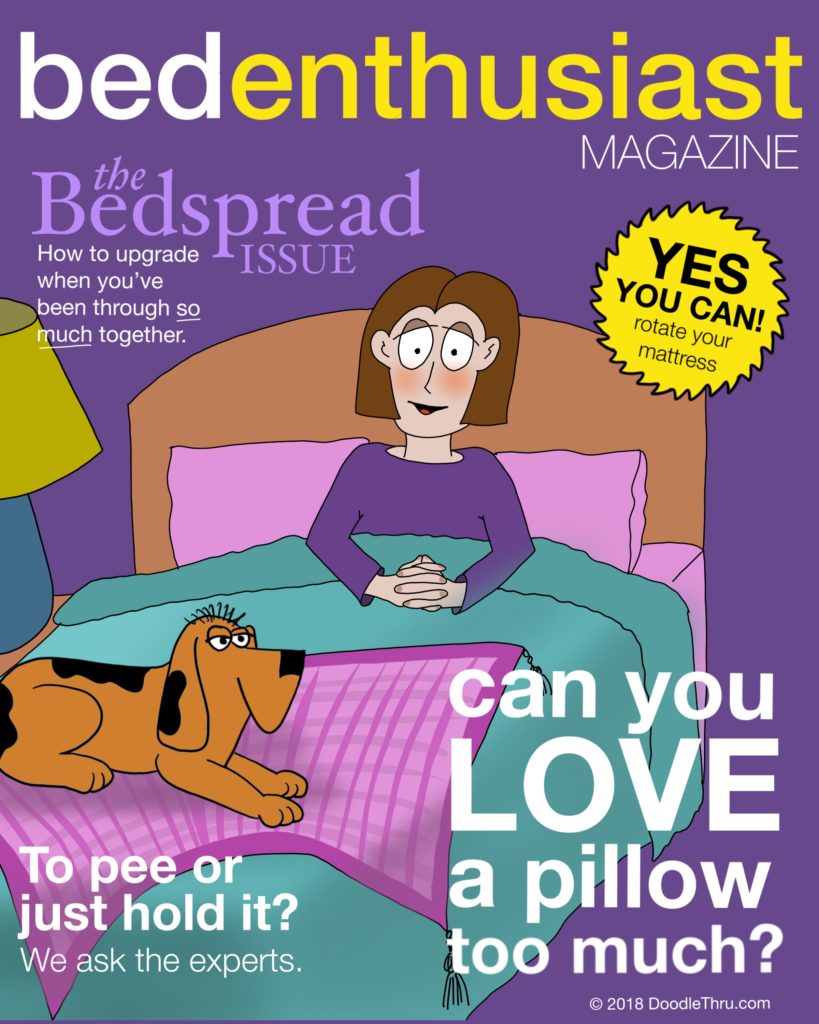 Colorful and satirical faux magazine covers for the chronically ill, wanted posters for antibodies gone bad and cartoons filled with spoofs and allusions to contemporary culture… all comprise DoodleThru, a web-based comic series.

The series was created by husband-wife team Jill and Mike Brook as an attempt to help Jill better cope with chronic illness. She has been struggling with dysautonomia and related disorders for more than 25 years.

“[…] we already tried crying, kvetching, meditating and ruminating, and that didn’t go so well,” the Brooks stated on their blog. “This is an experiment in coping.”

So far the experiment has been a success. Jill has self-reported that their cartoon project has done wonders for her mental health. And, as an added benefit, two patient groups picked up the cartoons for Dysautonomia Awareness Month.

7. ‘What It Feels Like to Have a Chronic Illness’ by Jeremy Sorese

Jeremy Sorese is like the boy from the film “The Secret Garden.” His body has always been fragile – from his birth, that he almost didn’t survive, to his latest diagnosis of ulcerative colitis.

His illness teaches him that we are the sum of all our parts – and this includes what we are missing. On the good days when Sorese is able to live life, he is able to forget his past conditions and current diagnosis. On bad days he yearns for more.

See the full comic here. You can see more of Sorese’s artwork on his website.

Rosa Devine’s passion for comics developed during a time when she was struggling with her health. Devine lived life as a trained ballerina when ME/CFS (myalgic encephalomyelitis, formerly known as chronic fatigue syndrome) hit. Now she has worked as a skilled cartoonist and secondary school teacher.

“I had been a keen reader always, but I was struggling to read from the top of the page to the bottom,” she recalled in a video for “The Irish Times.” “And at that point I think someone brought me a comic book from the school library. […] It was so much easier to look at a bunch of pictures that didn’t move, or make any noise, than it was to try to read a book or watch television. So, I got really into this comics thing.”

In her comic, “Chronic Fatigue Syndrome,” she shares the life lessons that she learned from her ME/CFS journey. While healthy people can glean doses of understanding from Devine’s journey, the underlying message is directed more toward those newly diagnosed with chronic illness. She encourages others to find the courage to discard appearances and carve their own unique path, filled with meaning and unconventional successes.

See the full comic here. You can follow Devine on her Patreon.

On her blog, “Hope Heal Cook,” Kat shares comics that give hope, follow her journey to healing from Lyme disease and complement her healthy recipes.

Kat has spent over two decades navigating multiple illnesses including Lyme disease, according to her blog. After her diagnosis, Kat learned that she has likely been ill since childhood. It wasn’t until she was in her early 20s that she was diagnosed with Lyme disease.

Her comics feature her thoughts and feelings before diagnosis, through the struggles of chronic illness, as well as the peace, relief and change that have come with healing. Her supportive husband/“former caregiver” (which we think may actually be a superhero title) is her sidekick in several panels.

For a dose of hope and understanding, Kat’s anime-style comics are serious motivation.

How many of these comics can you relate to? Let us know which one you vibe with most in the comments below.

Share
or  Copy Link
Link copied to clipboard.
Be first
430