What I Focus On 15 Years After Surviving a Stroke

Fifteen years ago I had a stroke and brain hemorrhage at the age of 37. It was a long journey to recovery as I had to see several physicians including a hematologist and neurologist on a monthly basis, go to physical and occupational therapy three times a week, and work on trying to improve my memory, agility and cognitive skills.

When the year was up, I was tested to see if any of them had improved. I was told they didn’t get worse, but they didn’t get any better. Everything stayed the same. The only good thing that came out of it was that I was able to regain strength on my entire right side, as it was temporarily paralyzed on and off before I was admitted to the hospital.

I have learned to live with my side effects such as aphasia, where I can picture the word I want to say when talking to someone but can’t remember it. Luckily, my close friends will fill in the words if they see me getting frustrated trying to finish my sentence. I also have to take my time when it comes to following written or verbal instructions. I find it best when I’m told and shown what to do in order to understand what needs to be done. I have other side effects such as short-term memory loss as well as difficulty with spelling/grammar skills. I’ve learned to work with what I have and just keep at it. If I gave up, I would have lost what I’ve been working so hard to overcome.

Even though it’s been a while since my health crisis, I can look back at where I was and remember how far I’ve come. I have overcome a lot through hard work and determination, as well as the support of my husband, his family and my close friends. They gave me the strength to keep going and never give up.  I’d rather not focus on what I cannot do. I prefer focusing on what I can do, no matter how small my accomplishments may be. I’ve come too far to give up now. There’s still so much I want to achieve, and nothing is going to stop me.

Taking an amazing photograph of nature, watching for shooting stars on a summer’s night, going on a trip with my husband or even visiting friends who live far away may not mean much to a healthy person, but they mean the world to someone like me. 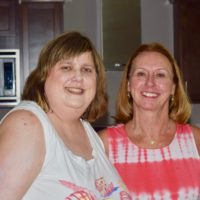