A suicide epidemic currently exists among teens. In fact, you’ve probably heard many startling statistics, including that suicide is the second leading cause of death for people between the ages of 10 and 34, according to the National Institute for Mental Health. You may also know that 8.6% of high school students attempted suicide in the past 12 months, according to the American Foundation of Suicide Prevention.

Knowing what to do to decrease these statistics is often left unaddressed in workshops and fact sheets on the topic. So what can you do as a parent to spot the signs of depression, as well as talk to your child about bullying and suicide? There are actually some simple steps you can take as a parent to help battle teen suicide. Here are some:

1. It’s about more than awareness.

Jason Reid founded ChooseLife.org after losing his son to suicide about a year ago. The nonprofit’s mission is to end teen suicide by 2030. (You can learn more about Reid’s personal experience by watching his TEDx Talk). He is passionate about translating awareness into action.

“At ChooseLife.org, we believe that it is time for change. We believe that the mental health community has done a great job of raising awareness about teen suicide. If you ask random people on the street if they are aware, they will say, ‘Yes, I am aware. Now what do we do about it?’”

Reid hopes to address this question by helping to educate parents so they understand that depression is a disease that can’t simply be “shaken off.”

“Parents must be educated on the signs and symptoms of depression in their children,” ChooseLife.org states on its website. “We need to give parents the right questions to ask and the the conversation starters to be able to talk with their kids while also removing the stigma of depression in families.”

2. Know the signs of depression.

It’s important to know the signs that your child may be experiencing depression or contemplating suicide. When you learn to recognize the signs, you are better able to help your child address what they are experiencing instead of leaving them feeling alone and misunderstood. Reid says he now looks back and realizes some of the signs his own son was exhibiting that went unnoticed at the time. He is adamant about helping parents learn what to look out for. As a parent, you have the unique opportunity to observe changes in your child’s behavior that may indicate they are experiencing depression or suicidal thoughts. Make sure to keep in touch with your child’s teacher, as well, because teachers are in a unique position to observe changes in your child’s behavior during school hours.

“Sometimes kids feeling suicidal will remove themselves socially and emotionally,” Reid said in his talk. “If you see a change, be willing to ask the tough questions.”

3. Look out for the warning signs including:

As a parent, it’s critical that you stay on the lookout for changes in your child’s appearance, grades and interests, which could be signs of depression.

4. Know what to say to your child.

“This is absolutely false,” Reid said. “If those thoughts are already in the child’s head, being willing to bring them out is the only way they will ever get better.”

The myth that talking about suicide will put the idea in your child’s head has been disproven by multiple research studies, according to the National Institute for Mental Health. In fact, talking with them about this subject might be the only way to find out what they are going through.

In an interview with University of Michigan Health, Dr. Cheryl King offers some helpful tips when talking to your child about depression and suicide, including:

While the topic may be difficult to bring up and the conversation may feel awkward, it’s important to push through and ask questions. Remember, this could be the first time your child is verbalizing what they’ve been struggling with internally. By starting the conversation, listening compassionately without judgment and taking a collaborative approach, you are helping your child feel less alone and more hopeful.

Depression is a painful disease to live with, and it can have devastating consequences if left unaddressed.

“I didn’t get the chance to ask my son if he was suicidal,” Reid said. “You do. Take the chance. The worst thing that will happen is that your child will say yes and you can get them the help that they need.”

You could be the difference between your child feeling alone and hopeless or getting the help they desperately need.

A version of this story originally appeared on info.1in5minds.org. 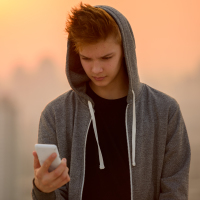