I sat in a tree covered with a light that was the best warm feeling I have ever felt. A boy staring down on the man abusing my shivering cold body slowly being choked out of existence. I left the house early that morning, before everyone was awake. I grabbed my fishing pole and headed to the lake where I spent most of my time trying to avoid an abusive home. I often went places alone at a very young age. I loved the lake and it represented a little known freedom, a place where I could just be without the fear of being a child in a home where abuse was common and violence was metered out swiftly. What wasn’t aimed at my body was aimed at my mind. Both have left me scarred.

There were no cars out and no people around, and still kind of damp from the fog that hung in the air when I arrived at the lake. I often went fishing by myself in the morning prior to my friends getting there later in the day. I seldom brought bait with me, I could catch grasshoppers or dig up wigglers, catch crickets or catch minnows, which were considered the best bait because they often resulted in the biggest fish being caught. So this morning was no different except that the moisture in the air was very heavy so the grasshoppers were not jumping and the worms were deeper because of a slight chill in the air.

I felt him before I saw him. My friends and I often fished in this smaller pond just beside the main lake and I was trying to cast into the spillway tunnel. The darkness was a haven for fish and as I leaned over to make the cast something told me to look up. As I did I saw a young man wearing a speedo, which was strange since it was a little cool out, but I swear I felt a chill as soon as I saw him. He was heading in my direction and I stopped casting as he approached. He asked me what I was fishing for and I told him. He must have known I was frightened because he moved away from me.

I continued to fish and although he had moved away he had positioned himself in such a way that I would have had to pass him to get up to the dirt road that separated the pond from the lake. I would catch a fish or sling my bait then have to find another and begin to work the grass for grasshoppers, which were few that morning. He called out to me, “Are you out of bait?” and I could barely speak when I said I am out of bait. He came over closer to me and said, “I know where there is a small pond full of minnows. I can show you where it is.” I said, “Maybe later,” but he continued to pressure me and I knew in my heart that either way I was going to have to go with him.

I began to shiver very hard and became cold and realized how wet I was from the fog. I made it up to the dirt road and he was right behind me, I could feel him breathing and seemed like I could hear his heart beating loudly as he pointed down the road and said, “It’s right down there, just down the road a little.” I walked along in slow motion so frightened, so cold, not really knowing what was coming and really at 10 or 11 it never occurred to me just how bad it would become. He said, “Right down there, follow that trail and it leads to that pond.” I gasped for air and knew I had to go down there and so I did. He followed me down the trail through the high grass and into the woods, and just as I was turning around to tell him there was no bait down here, he grabbed me and wrapped his hands around my throat.

The chill became a violent shaking as he held me by the throat, slightly choking me and breathing into my ear, “Take off your pants or I will kill you.” After two more chokes I did. He put his weight on me and forced me to the ground. I shivered on the ground being raped and feeling so cold and alone, he began to choke me harder and I could not scream anymore. This continued and I woke up in the tree beside this horrible scene, filled with warmth and love and realized for the first time that maybe I was dying.

I looked down with an empathy I did not understand, not just for that body that was me but also for the person raping and killing me. Somehow I knew it would be OK and that I was truly loved, not some trick to hurt me, but a true feeling of warmth that was love to me. I continued to cry as I sat up on this branch looking down. I felt bad for my life and wondered why I had not known love without violence. Then wham, I am back in my body.

He made me get into the water where people went swimming and I stood in the lake shaking, freezing, teeth clicking and terribly cold. Then that warmth returned again and I heard a motorcycle coming down the road toward the swimming hole. I may never know what lifted me, but something did, and I was up and out of the water running toward the motorcycle and freedom. I told the young guy on the motorcycle, probably a teenager, that the guy down there had hurt me and before I could ask he said get on and I did. I grabbed around him and held on so tight I am surprised my angel could breath.

He dropped me off at the store and I ran the rest of the way home. I never told anyone back then because I was afraid of many things. I remain afraid to this day, although I have admitted what happened to a family member. Then I began admitting it during counseling, but I have never told anyone exactly what happened. Now I am in my early 50s and I still struggle with that day. I have never gotten over it and I have never felt that warmth again, although I have been desperate for it. That warmth rescued me and in some ways tortures me. I try to be OK and live my life by putting that stuff away, but the terrible truth is that box that I stuff that memory into leaks and to this day the smell of rotting leaves can devastate me for weeks, a certain kind of damp foggy morning can turn me into a shivering 10-year-old desperate for that warmth that saved me, but forever knowing it won’t come.

Share
or  Copy Link
Link copied to clipboard.
Be first
13 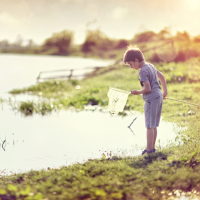