Kathy Brandt, a hospice expert who wasn’t afraid to talk about death and dying, died on Sunday of ovarian cancer at age 54, according to Kaiser Health News (KHN). A leading professional in palliative care and hospice care, especially for the LGBTQ community, Brandt and her partner Kimberly Acquaviva documented the whole journey to teach others about end-of-life care.

Brandt was diagnosed in January with stage 3 ovarian clear cell carcinoma, an aggressive and rare form of cancer. After doing her research, Brandt learned her diagnosis was terminal so she and her wife decided to focus on the quality of her remaining time rather than quantity of time left. Brandt refused medical treatments and instead focused on palliative care to manage her symptoms and comfort instead of “futile” medical interventions.

“If you’re ever diagnosed with a disease that will ultimately kill you no matter what you do, think through what you want the rest of your life to look like,” she said, according to KHN. “Then seek out care that will help you make that version a reality.”

“The treatment choices we were making were focused solely on what we wanted with our family… We wanted people to know that we accept the diagnosis; this disease will kill me — and I’m okay with that.” –@Kathy_Brandt pic.twitter.com/wvFsCvHzgB

A 2017 report by KHN looked at how patients given a terminal illness diagnosis, especially cancer, aren’t given enough information from their doctors to make an informed decision about their treatment. In one instance, for example, Carolyn McClanahan’s mother was told there was a 25% chance her terminal liver cancer would “respond” to chemotherapy. McClanahan, however, heard there was a 25% chance treatment would cure her mother’s cancer.

In reality, doctors meant there was a 25% chance continuing chemotherapy would reduce some of her mother’s symptoms or increase her life by a few months — but there was no chance for a cure. Poor communication meant McClanahan and her mother weren’t able to make a truly informed decision. The extra round of chemotherapy ultimately caused more distress and pain before her death.

Acquaviva and Brandt, who contributed to the latest edition of “Clinical Practice Guidelines for Quality Palliative Care,” used their own story to empower others about the choices available at the end of life, even if it’s painful to think about. Part of this is understanding and allowing the body to lead the dying process. We don’t want to lose the people we love, and it’s only natural we would try to intervene. But according to Acquaviva, it’s often better to let nature do its job.

“It’s been about a week since @Kathy_Brandt last asked for food. I haven’t offered any to her after that,” Acquaviva shared in a tweet thread, continuing:

When someone’s dying, their body stops wanting food and water. This is basically one of the body’s built-in mechanisms to ensure comfort at the end of life. Think of the human body like a car. When you drive your car a lot, you need to keep putting gas in the tank. If your car is just sitting in the garage, though, topping off the tank every day isn’t helpful – gas spills all over the ground.

When someone is dying, their organs stop sending ‘gas me up’ messages to the brain. Reduced hunger and thirst is the body’s way of saying, ‘we have plenty of gas to make the trip in front of us.’ … This is why it’s so important to explain to families — in terms a layperson can understand — that it’s an act of love when they listen to what their loved one’s body is telling them.

When someone is dying, their organs stop sending “gas me up” messages to the brain. Reduced hunger and thirst is the body’s way of saying, “we have plenty of gas to make the trip in front of us.”

The couple also shared updates throughout the journey on a GoFundMe page, which highlighted the emotional experience at the end of life. Brandt shared this can range from discomfort from your symptoms and the impatience of feeling limited in what you can do as well as concerns about the logistics, like the financial well-being of your family. Sometimes even good news can be difficult, as Brandt highlighted in an update on June 30:

It’s a mind-altering experience to be certain you’ll be dead by August and then be told actually you might see September too. I’m happy, but as you can see from my list above, also stressed about what it all means. I’ll take the time, if it really can be given to me, and I’ll revel in it with Kim and [my son] Grey. We’ll figure out the logistics, I’m sure. And I’ll keep breathing and living, one day at a time, until I can’t.

In another post, Brandt candidly shared how she could feel her symptoms and disease worsening. “No matter what I do to control my symptoms, though, the underlying cause of those symptoms is increasingly evident: I’m dying,” she wrote.

Brandt died on Sunday, leaving behind an important conversation about hospice’s mantra — “die how they lived” — for those who come after her.

“I wanted all of you to know that Kathy had a peaceful death and your love and support is what made that possible,” Acquaviva wrote in comments on Facebook. “Our family has felt your love and we can’t begin to tell you how much it’s meant to us.”

Those following Brandt and Acquaviva’s journey on social media thanked the couple for sharing their process, especially because loss is such a hard topic to face but reconsidering palliative or hospice options at the end of life can make a difference.

I started following @kimacquaviva after I saw her speak at a conference & thought she was brilliant. Now I'm witnessing a palliative care specialist document the end of her partner's life. Thank you for teaching me more about end of life than anyone has (wish I had you in '95).

Acquaviva announced on Facebook she, Brandt and their 19-year-old son Greyson already planned Brandt’s memorial, which is scheduled for Oct. 26 in Washington, D.C. Brandt also requested an obituary in the New York Times, and Acquaviva told KHN she was very clear about what it should say:

From the time that Kathy was diagnosed with clear cell ovarian cancer six months ago, she was clear with her family that the cause of death should be listed as the Trump Presidency in her obituary. In lieu of flowers, the family asks that donations be sent to whichever candidate secures the Democratic nomination, even if you really wish someone better were running.

Share
or  Copy Link
Link copied to clipboard.
Be first
953 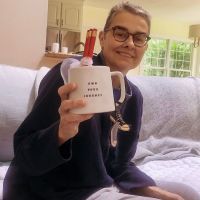