There are no pictures of my children hanging in my home. No poised school photos adorned and secured to the walls. No wood frames or glass encasing their smiling faces. Like every mom, I was proud to display them. But for some reason they looked suffocated, trapped in there, frozen in time — like me.

My doctor never warned me that becoming a mom after acts of sexual violence would come with its own set of issues. Issues I would never find in the “what to expect when you’re expecting” aisle at the bookstore.

No one told me pregnancy alone would feel intrusive. As I tried to balance embracing the anticipation of each growing child with the complete violation it felt to my body. As my belly grew to an unfamiliar size, pressing on my diaphragm and shortening my breaths. I felt trapped in my body, just as I did when he was on top of me.

No one told me each and every contraction minutes apart over hours would insight feelings of capture and fear; anticipating the next time, and yet having no control over when they would come or leave.

No one told me three and a half hours of pushing would feel like the stations of the cross. Culminating in the crucifixion of my perineum; torn flesh and blood dripping down each leg. Nor that I would shake and tremble so severely it would be deemed unsafe for me to even hold my first-born child. That my 7-year-old nephew would hold him before his own mother. And that I would need to be sedated.

No one told me I would cry unconsolably at the mix of both the beauty and the discomfort of being a PTSD mom. Or that my own breasts would weep like the tears that fell from my eyes. Nor that I would endure this four more times; each time hoping for the experience of a glowing and radiant like pregnancy like the moms I knew.

And finally, no one told me pregnancy would actually be the easy part…

Motherhood with post-traumatic stress disorder (PTSD) makes even the most basic parent routines like bathing and bedtime prayers complicated. Every core belief I wanted to instill in my children of God, faith and church would contrast with my own experience of being sexually assaulted by a priest at 10 years of age. Denying my own trauma to even myself so that they could be baptized and attend a Catholic school just as I had.

I attempted to erect the same white picket fence of my idyllic childhood. A fence so high no one could see my depression, my anxiety or any of my dirty little secrets. I wore my fear on my sleeve like my heart; and it became my decision maker. An overprotective mom, I didn’t foster independence the way other moms do. My own trauma had taught me very early that there was no safe place for children.

I didn’t push my children to embrace sports or hobbies. In my world not even school or church was safe. How was I ever to trust my children to a stranger? I had severe separation anxiety and without intention, but perhaps instinct, my children developed it too.

Motherhood trapped me in a never-ending cycle of hypervigilance, avoidance, isolation, depression and panic. A circular motion aimed at the protection of my children. But it robbed me of the potential for true joy as well. Because the most terrifying thing about true joy is that it requires us to be present here in this very moment. That is not an easy feat for me as a trauma survivor who spent most of my life trying to separate my emotions, thoughts, feelings from my body and dissociate.

When we turn off the grief and shame, you also turn off the potential for great happiness. Dissociative disorder, often concurrent with PTSD, made me a spectator in my own life, as if standing on the sidelines watching my life unfold. Instead of being able to engage in the moment.

Now that my children are teens and adults I grieve for the moments I’ve missed. I grieve for every assembly, football game, birthday or special occasion I missed because I let my illness dictate my life. The moral injury of shame not only comes from my past abuse, it comes from every single time I let it dictate my life in the aftermath.

I used to wonder if my children grew up to be the exceptional humans they are today in spite of me or because of me. I tried diligently to embrace the latter.

There is nothing in the world that is all bad. My trauma allowed me to be the type of mother who would allow for open and honest conversations about the really hard stuff: mental health, feelings, consent, politics, faith, abuse, relationships and empathy.

My traumatic past let them jump on the beds, eat ice cream for breakfast, dance in the rain, stay up way past their bedtimes, because they know or at least I hope they know to enjoy the small, special things in life because there are real battles out there for them to conquer. And that when (not if) they end up wounded by the world. I trust they know their mom will be waiting with arms open wide, without judgment, simply because she has been there. 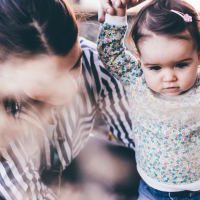