Back in fifth grade, my daughter and I entered the year with great trepidation. Her fourth grade experience had almost broken my daughter, Yassy, who has Down syndrome, and me. But the second I met her new team at the staffing before school started, hope was born. And it didn’t take long for that hope to become concrete success.

In my daughter’s case, we all decided that doing a joint 3K race in November would be great. My husband, older daughter and the special education teacher, Mrs. Dranoff, were all very good distance runners. Yassy had already run some races. Mrs. Ellis, the general education teacher was not a runner, but she was game, always showing a positive attitude. A Saturday morning race was chosen.

When we arrived for the race her teachers wore pigtails in honor of Yassy. Her teachers bought everyone matching hats and I made  “x+y = success” signs for them to wear on the back of their shirts. By this time, we knew this was a magical year.

My older daughter Nia’s former cross-country coach was there, as well as some families we knew from her running days. Both teachers’ husbands were there. The race went well — with my daughter running in between both teachers. The joy of seeing them as a cohesive unit is etched in my heart. After the race, we all went and ate breakfast together. It was a perfect day. 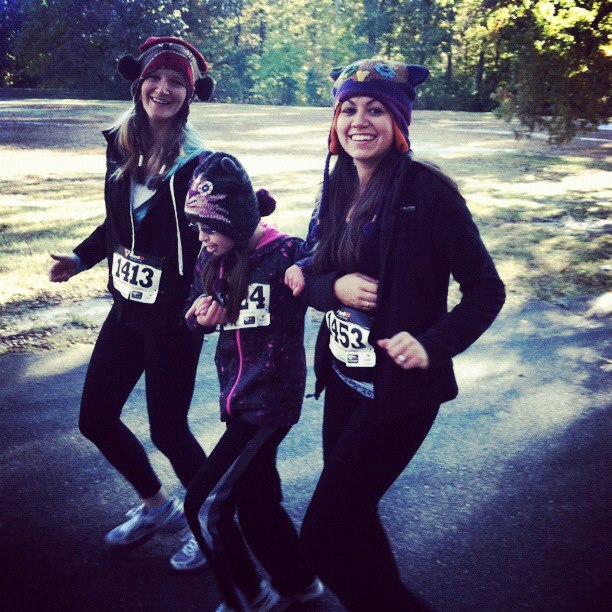 That year was transformative for Yassy and me. This dream team truly achieved miracles, that included Yassy passing benchmarks and standardized tests for the first time along with excelling in all subjects. My family became close with Mrs. Dranoff and Mrs. Ellis. Very close.

On April 15, 2013, Mrs. Dranoff was running the Boston Marathon. We were all very excited for her, until 2:49 p.m. when the bombs went off. Panic ensued. I called Mrs. Ellis who did not know. She told co-workers. Students had just been released for the day. We all cried, worried and waited.

My husband is an experienced runner. He, and many others, knew that the time when the bombs went off was close to Mrs. Dranoff’s finish time. Knowing that made waiting torture. You know how much you love someone when you wait through something like that. And everyone loved Mrs. Dranoff.

My husband lamented that Mrs. Dranoff came so close to finishing and did not only because of this tragedy. A few days later, he gave her one of his Boston Marathon medals. I told you we love this teacher. Both teachers.

Fast forward to 2019 and both teachers have moved away. They also now have beautiful young children. But we are still close. They have each written letters of recommendation for Yassy for other teachers. They have each written me such kind things I keep them laminated by my computer to lift me up in hard times. Mrs. Dranoff did stay one more year and ran another race with Yassy in sixth grade, even though she was no longer her teacher. The bond and gratitude we have for these extraordinary women is deeper than deep.

And that is why they both have said all along they will be at Yassy’s graduation in 2020, even though that involves an out of state trip for one of them. I believe them. That is the power of love.

A version of this story originally appeared on Born Fabolous Podcast.

Share
or  Copy Link
Link copied to clipboard.
Be first
752