Why Bipolar Depression Makes It Hard to Leave the House

I left the house this week. This may sound strange to anyone who isn’t depressed, but for people like me, who are plagued by the “black dog” relentlessly, it is a gargantuan feat. I have bipolar disorder, and though I take my medication religiously and hold down a job, sometimes the power my brain has to let sadness seep through is just too potent.

I should have seen it coming really, but oddly, given I have lived with this condition since I was 13 years old, my mood episodes always catch me off guard. I lost my mother 11 weeks ago, and everyone was surprised that I coped so well. Only of course I wasn’t really coping; I was numb, and then I was cycling from hypomania to low-grade anxiety. And now of course, the inevitable crash.

It always starts with bone-aching tiredness. I could sleep 24 hours a day. It doesn’t matter how early I go to bed; I still feel like I’ve been hit by a tranquilizer dart. The shift in energy is the first red flag. And then the compulsion to isolate. I stop answering my phone. People text, and I’m too tired or distracted to respond. And then the residual paranoia, the internal dialogue which tells me that outside is not safe. The world is not safe, so it’s better to stay inside with the curtains drawn.

At times like these, I cannot even make it to the corner shop: it feels too big. So I go without milk, or bread or whatever else I need, and just go back to sleep. Sometimes in my melancholia I feel slightly better inside my house, in that I can make it off the sofa. Sometimes I even manage to have a shower, or put a load of washing on, and when I do, I feel like I have accomplished something extraordinary. I immerse myself in crime dramas in between naps and I feel like I’m part of the world… Kind of. Unless the world tries to intrude in the form of a ringing phone or doorbell, in which case I hide.

It is hard to describe the feeling of unrelenting nothingness this mood-state brings. Life becomes gray; I see no reason in doing anything, and the future feels like it is not relevant to me because my days are split up into 60-minute intervals, so it is just about getting through one at a time. Moving from one episode of some HBO drama to the next until it is time for bed and the reprieve that sleep brings.

I am completely joyless and frequently tearful, stuck in a loop of rumination and regret, guilt and self-loathing for not being better. For not managing to get out of my pajamas yet again. I am neither here nor there. I have absolutely nothing to say to anyone. Words leave me; they become saturated with tears with a searing, soggy pain that covers everything and renders it useless.

A bipolar depression feels like being locked in a dark room, with a blindfold and gag on. It is like having one’s thoughts submerged in syrup. It is suffocating and sad. You always know that the world moves on around you; only for you it does so utterly without meaning. The sun is shining, but you can’t see it. You can’t feel its warmth. The world feels at once dizzyingly busy and completely empty. And at the time when you most need to reach out, you can’t. Because you’re locked in a dark room.

People say things like “call me if you need me,” but there is no one less likely to call anyone than a person in deep despair. Because, why would you? People have lives, which invariably don’t include the disorientating cycling of moods that bipolar brings. By the time you get to the point that you most need to call someone, you are devoid of the skills to do so. So you just go back to sleep, or watch another episode of “Law and Order” while tears plop into your lap. That’s my world, and that’s where I live. Far too often.

But this week, I left the house. I got dressed, and brushed my hair and I drove my car. And it wasn’t entirely successful because the whole time I was out I was hypervigilant as all hell. I couldn’t focus on what I was doing, I panicked a lot and I felt exposed and vulnerable. I felt paranoid that people could see through me — I was jumpy and agitated and acutely uncomfortable around anyone at all.

But, I did it. I opened my door, and I went outside, although it didn’t stop me from being sad. I’m still sad and I’m still tired, but for now I managed to get off the sofa and that’s OK.

Share
or  Copy Link
Link copied to clipboard.
Be first
139 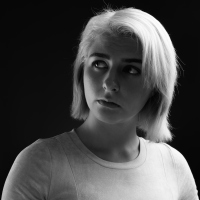