10 Tips for Taking Your Autistic Child to Disney World

It’s time to go on vacation! And what a fun place Disney World can be. Our oldest son Ross has autism and we have had several successful trips to Walt Disney World with him and his brothers. We have learned a few things along the way, and I hope you will find some of these tips and tricks helpful as you plan your trip.

That may be the motto of every parent of a child with autism. The more you can prepare yourself and your child for your trip, the better. One of my biggest concerns with my son was getting through the airport. Our therapists prepared a visual schedule that walked Ross through the airport, including potential pitfalls like putting his beloved stuffed panda bear on the conveyor belt to be screened. We also looked at pictures of the hotel and bus to the hotel ahead of time so Ross would know what it looked like.

In addition, we spent a lot of time researching which attractions he would probably like. While we let him and his brothers pick where they wanted to go, we guided their choices knowing which attractions were the most likely to be successful. We used the Unofficial Guide to Walt Disney World and Disney World’s Attraction Details for Guests With Cognitive Disabilities to help us sort through the plethora of attractions at WDW. This second guide is a chart that shows the length of a ride, element of surprise and various other features. It is incredibly helpful for picking rides if you are new to the park. Disney World also has a planning guide with lots of tips for planning your trip as well.

Traveling can cause dysregulation. Disney World can be loud and visually overstimulating. We brought noise cancelling headphones for Ross including a pair that hooked up to Bluetooth (Worktunes) so if he needed to totally escape, he could watch a movie through the earphones. They were awesome when he was just done and we were exiting the park or on the buses and monorail.  We also used a stroller with a large hood, the City Mini, where he could essentially hide from the visual over-stimulation. Definitely also make sure to bring any other regulating tools such as fidgets and chewies that you usually use with you.

3. Keep everything as “normal” as possible.

This seems like a bit of an oxymoron for a vacation, but the more that can stay the same as home, the better.  The first year we went to Disney, we brought Ross’ stroller from home. The second time, we rented the exact same model and prepped him that it might be a different color. Knowing that it would be his usual stroller was very calming to him. We also brought single serve milk boxes from home so we were sure we could get his usual type, brought LEGOs he loved and all our Captain Underpants books. 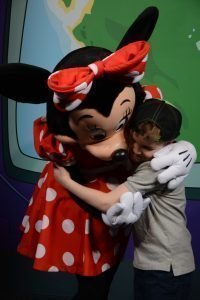 4. Get the accommodations you need.

Disney World offers a few great options for accommodations to help make your trip smoother.  The first is the Disability Access Pass. Instead of waiting in line, you are able to check in at an attraction and get a return time.  You can then return anytime at or after the return time. For us, being able to return anytime later in the day versus the two hour window of the Fast Pass was helpful in case Ross needed to take a break.

To get a disability access pass, you go to Disney World Guest Relations and they will walk you through the process. The first time we went to Disney World, I brought all our diagnostic paperwork, but they never looked at it.  It turns out the program is need-based and not based on any particular diagnoses.

We have also used the “stroller as wheelchair” tags. It is helpful for Ross to stay in his stroller when he is starting to get overwhelmed or a little nervous, and this tag allows the stroller to go wherever a wheelchair can. For going through the airport, there is the TSA Cares program. We have not personally used it yet, but families I know who have used the “walk through” program have found it very helpful.

Disney cast members (what Disney calls all staff) can guide and help you and are always willing to do so. If your child needs to take a break from it all just ask and they will direct you to the nearest break spot (these are also listed here). Cast members can also assist in finding dietary options if your child has an intolerance, allergies or other specialized needs. They can also sometimes bend the rules a bit. Our first trip, we didn’t have a stroller as wheelchair tag (I didn’t know about it yet) but Ross couldn’t get out of his stroller due to anxiety at Chef Mickey’s. I asked at the check-in desk and they were able to switch our table to one that was able to accommodate his stroller.

I’m saying this to you, the parent or caregiver. You are not missing out because you didn’t go on the newest ride. If you don’t tell your children how many characters or rides there are they won’t fear that they are missing out when they get tired and leave early. Disney World is hard because you have to balance being relaxed and going with the flow with also needing to be well scheduled — both because of the needs of your child and the necessity of the Disney Fastpass system and reservations. Having FOMO (the fear of missing out) will not help you balance these already sometimes opposing needs. 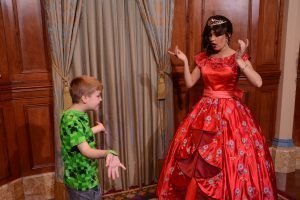 Trips rarely go as planned. Disney World is no exception. Having a plan, or plans, in case your child turns out to be scared of Mickey Mouse (it happened to one of my twins the first time we went) or everyone is getting overheated is important. The same goes for knowing your exit strategy. When Ross is done for the day, he’s done. Sensory overload is not easy to overcome after a point, and it is not worth pushing it for us. When that happened it was important to our family to know which parent would take him back to the hotel, and for Ross to know too.  We have two other children who also needed to know that plan.

8. Find something your child will love, even if it is off the beaten path, and stick to it.

Somewhere deep in a Disney chat room I heard about the Sorcerers of the Magic Kingdom attraction. You check in at the Magic Kingdom firehouse, get playing cards (that you can also collect) and a map, and are then sent on quest to find various “portals” throughout the Magic Kingdom and eventually defeat a Disney villain. It’s an amazing interactive treasure hunt full of Disney Magic. Ross loved it! He cared far more about finding the portals then going on Space Mountain or any other ride, and although it wasn’t the “average” way to spend a good chunk of the day at the Magic Kingdom, it was tons of fun and it was great to see him engaged and excited.

I read a blog post by someone whose autistic son only wanted to go on the Dumbo ride. While the parent was a little bored, he said he was happy that his son found something he really liked about Disney World so they stuck with it. We did the same with Sorcerers of the Magic Kingdom. We searched all over the park for villains until it was time to go see Elena of Avalor, his other favorite!

The first time we went to Disney, Ross spent at least 75 percent of the time in the parks in his stroller.  He engaged far less than I expected (at least in the traditional, neurotypical sense) and seemed far less enthusiastic then his younger brothers. But he spent the next 12ish months talking about how great it was, telling stories and asking when we were going back.  I had expected him to engage in a particular, more traditional way, but he engaged and enjoyed it in his own way.

From a caregiver perspective, accept that you will likely come home far more exhausted than when you left. When my husband whines about vacation being tiring, I like to remind him that “it’s a trip not a vacation” for the parents sometimes. While Disney World is awesome, there is a lot of work involved!

I hope you have an amazing trip to Disney World!

Share
or  Copy Link
Link copied to clipboard.
Be first
135