When Mental Illness Makes You Question Your Connections

The other day I found my old high school yearbook, and I began to read notes from past friends. They were the type of friends you seemed to spend more time with than your own family. I could only take about ten minutes of this before I was flooded with a sense of sadness, guilt and “what-ifs.”

At this point in my life I have figured out what I need to do to manage my mental illness. In the past, when everything became too big and I felt too small, I struggled to pull myself out of it. I turned to various vices to cope, and some were better than others. I suppose in a way my friends were a vice. They were able to distract me from the gnawing pain I had yet to deal with. Distraction is not the same as protection though.

When we all went our separate ways to college, I quickly realized I was truly alone. Yes, Facetime and texting can help bridge the gap physical distance creates… but friendships are hard to keep when you no longer share the ease of childhood.

I am a good friend. I have a strong sense of empathy, and my heart craves to love others. Unfortunately, as I grew more ill, the distance between me and those I used to consider my second family grew larger. I began to question if I mattered. I found myself asking “was I a good enough friend… was I a good enough person?”

I could not comprehend how those friends I thought would automatically always be there, seemingly forgot I existed. I began to believe my imperfections had become a burden, and that they didn’t deserve to be pushed further into the inconvenience of my own dark reality. I began to believe the lack of my existence would therefore not affect anyone else in my life either.

I woke up one day restrained to a hospital bed, without any memory of how or why I was there. As my family and friends (mostly new friends, but a few old sprinkled in there) showed up to help me fight my demons, I realized those around me were my people. I had placed so much energy into mourning the friends who were disappearing, that I had taken for granted those right in front of me. Luckily, they did not let me disappear from them.

I have learned it is OK to mourn friendships you have lost. That being said, we shouldn’t let the grief from a loss of connection block our ability to connect with those who are currently in our lives. In life you will meet individuals who ignite your soul; we must remember some are meant to stay longer than others. It is OK to let them move on and grow. 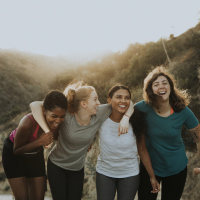