The R-Word Doesn't Belong at the Renaissance Festival

I’d never been to a Renaissance festival before, but my kids love “The Princess Bride” and my 15-year-old is a Monty Python fan, so when we saw an ad announcing the festival’s opening weekend, they asked to go. I think they had hopes of seeing Fezziks and French Taunters milling around with turkey legs, bantering with the festival goers.

We drove 30 minutes to the festival a few Saturdays ago, and after making our way through security, were greeted by a pair of friendly performers on stilts. They chatted with the kids for a few minutes, and posed for pictures with my middle son, who has Down syndrome. A few minutes later, a comedian/fire thrower started calling people over for his show, billed as “PG and family-friendly,” so we sat down to watch.

He was funny for a few minutes, telling jokes as he juggled torches. But then he said, “I want to let you know, I’m fire retardant.” This is where people started laughing and my stomach dropped, because I knew what was coming next. Sure enough, he then said, “I hear you laughing, but to be clear, I said I’m ‘fire retardant,’ not retarded!” And the people around us laughed harder. My husband and I made eye contact, stood up, collected the kids and walked out of the show. Later I emailed the festival organizer, and a media manager responded with an apology and a promise to address the issue with the performer.

It’s far from the first time I’ve heard the r-word, and not even the first time someone’s said it in front of my son with Down syndrome. But there’s no excuse for anyone still using it or laughing at it in 2019. If you don’t understand why that word is upsetting, you don’t know enough about how people like my son often used to be treated. People with Down syndrome and other disabilities were routinely institutionalized, forcibly sterilized, abused and neglected.

Until 1984, doctors could refuse to provide lifesaving procedures to patients with Ds, which is one of the reasons life expectancy for people with Ds used to be much shorter; entire generations of babies with the diagnosis who needed heart surgeries didn’t get them. Why? Because they were seen as defective and unworthy of medical intervention, therapies or even love. For far too long, people with intellectual disabilities have been dehumanized. And that’s exactly what words like the “r-word” do. They reduce a whole person, just as worthy of respect as you or I, to a painful punchline.

The only possible excuse for using a slur is ignorance. But Spread the Word to End the Word, The Mighty and other groups have done a great job of getting the message out. So if you’re still using that word, it isn’t that you didn’t know it was a slur. It’s that you just don’t care. And if you hear someone else use it and laugh? You’re complicit. When you know better, you do better. So please — the next time you hear the r-word, shut it down. Don’t laugh.

As for the Renaissance Festival, things improved dramatically from that low point. The friendly acrobats we’d met on the way in spotted us and called out to us. They not only remembered my son’s name, they asked him to come watch their next performance. And later, after we’d walked into a shop full of wooden swords and shields, the owner came over to us and handed my son a sword and said, “This is a gift from me!” And then told me quietly, “I keep a few of them for when I see kids who remind me of someone special to me.” Sometimes we get that, too — people who’ve loved someone with Ds, who smile at my son and want to share stories with me. Someone who understands the magic contained in those extra chromosomes.

Share
or  Copy Link
Link copied to clipboard.
Be first
16 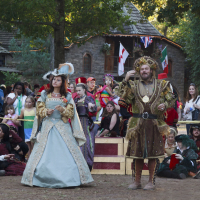