How My Son's Deafness Changed the Way I See My Own

When my second son was born, he didn’t pass his hearing and screening test. The doctors told me it could be just fluids in his ears. I thought for sure that had to be the case because I’m the only one in my huge family who has a history of hearing loss. But my hearing loss isn’t congenital. It began when I was a teenager and I believe it was due to all the recurrent ear infections I had as a child.

Even though Jason did have fluids in his ears, after further testing he was diagnosed as profoundly deaf. We did some genetic testing and nothing came up that could relate his hearing loss to mine.

Little did I know then that putting all of my energies towards helping him out would unleash a whole new path of discoveries in my life. Having teachers, professionals and advocates dedicated to him from the moment he was born was a grand teaching lesson to me. It made me see how little if any of that I received when I was first diagnosed and how many years I had navigated trying to work around my hearing loss instead of working with it. I noticed how many choices I had made in my life out of fear of being made fun of, laughed at or ridiculed. I chose a career in isolation, where I worked as a designer from home and only dealt with clients on a one-on-one situation. Every choice I made was subconsciously guided by how comfortable or not I was with my hearing loss.

Jason didn’t know the difference. He was born deaf and that’s the only world he knows. He always had professionals teaching him sign language, speech, how to self-advocate, become more empowered and independent. He is so much more comfortable with being himself that he became my guide and my example just as much as I have been to him.

As I got more involved with the community, meeting other families, adults and children with hearing loss, caring professionals and teachers, a desire to do a deeper inner investigation of my true calling began to grow. I realized that everyone’s stories and paths were at the same time relatable and unique. We could all learn from each other. All the things I have gone through had the power to help others who were finding their way along similar paths.

After years of investigating and at the same time making sure my children were old enough to be more independent, I finally took the courage to combine the two things I have become most passionate about: doing art and advocating for people with hearing loss. Art has always been the best way I’ve found to process what’s in my mind. The difference this time is that I was going to allow myself to share it with the world, even though that was one of the scariest things for me to do.

Up until that time, any art that I created stayed within the confines of my own home. I had never tried to sell my art or put it in a gallery. A lot of what I created was left unfinished. Aside from the fears related to my hearing loss, there’s a strong belief in our society that an artistic career doesn’t generate enough money to pay the bills. If I were to do anything about it, I would have to learn the business side of being an entrepreneur and be really good at creating art. There were a lot of cards on the table to juggle and a lot of inner barriers to face.

Meditation and therapy helped me get there. I decided to trust myself and to let go of any negative expectations. In order to get unstuck, I created a method called: “The Weekly Letting Go,” where I challenged myself to complete a piece of art within a seven-day timeframe. Every week I would create any art form, with any material I would feel compelled to use at the moment. The subject and the message were not relevant. The idea was to be able to complete the art piece within a week and then share it online, even if I didn’t like the end result. I was able to do this for three consecutive months. For the first time in my life, I had many completed art pieces of my own.

I was using a little bedroom in my house where I did my work and kept my art materials. The room was now filled with new art. Without much space for anything else, one of my pieces accidentally fell on my foot, giving me a big bruise and breaking my sculpture in half. I took it as a sign: It was time to get my art out of the house.

When you’re aligned with your own path, little doors of opportunity begin to open up for you. I shared my experiences with an artist friend and she ended up inviting me to join the art collective she was a part of. I was now with my own studio at the Mare Island Art Studios in Vallejo, CA with 18 other artists. For the first time in my life, I was fully engaging with the art community and with a studio space outside of my own home. I was participating in local events and getting attention from newspapers and online blogs related to the deaf and hard of hearing community.

At first, I was doing artwork that shared my own journey with hearing loss, transformation and self-acceptance. Even though I was afraid of being criticized, I ended up receiving a lot of support and positive feedback which motivated me to keep going.

I created a platform called MyLuckyEars and built a website for it. I went on to do art related to other people’s stories, including my son’s and a whole world of ideas unleashed within me. I could barely keep up with my own mind. It was as if there was a tight jar of ideas collecting in my thoughts for years and years and then all of a sudden I decided to open that jar and it all began to pour out faster than I could create.

I noticed that most of my life I had been dancing about the idea of doing art related to this topic, but never had the courage to even attempt to do so. I had hundreds of sketches and writings stored all over my house, collecting dust and cobwebs, forgotten, waiting for the right moment to be turned into something bigger, to become a creation.

Once I began to make and share my art, I truly understood what it feels like to work with something you’re passionate about and how rewarding it can be when you learn the impact it can have on others. The fear became less and less relevant as I focused on the message and on the ones who are receiving it. And because I was so passionate about it, I then was presented with opportunities to connect with other individuals who are just as passionate and have been collaborating with them. Together we become a stronger voice, reaching more people, beginning a beautiful chain reaction of positive influences.

Most of all I realized the only thing that was stopping me from doing what I truly love wasn’t my hearing loss, it was my mindset. We all have everything we need to put that spin into our thoughts, no matter what type of disabilities, conditions, limitations or whatever it is that we have going on. We can use them to either empower or limit ourselves.

Even though I continue to grow and make mistakes and have moments of doubt, I can’t see myself doing anything else. I wake up in the morning excited to face my challenges, learn and create more art. I’m comfortable with my hearing loss. I’m grateful for the entire experience this life has given me and I’ve realized our own children can become our greatest teachers. 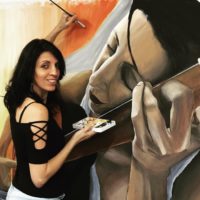