At the beginning of “Eli” — a Netflix original movie released last month — we’re introduced to Eli (Charlie Shotwell), a young boy whose autoimmune disorder is so severe, he must be kept in medically clean environments. He sleeps in a plastic medical tent, cannot bathe like everyone else and has to move through the world in a hazmat-type suit.

The seriousness of his illness is demonstrated when, during a stressful incident, Eli falls on the pavement. His plastic suit tears and he immediately can’t breathe while a red rash appears on his face. The family (including his mother and father, played by Kelly Reilly and Max Martini) drive long-distance to see a specialist, Dr. Horn (Lili Taylor), who is incredibly expensive and has reportedly cured every one of her patients. The treatment center is a large mansion, retrofitted to be a clean space. At first, the initial relief for everyone in the family is clear and emotional.

Eli is plagued with nightmares about his illness which makes it hard for him — and the audience watching — to realize the treatment center he is staying in is haunted.

Dr. Horn tells Eli and his family there are three stages of treatment. As the physical effects of the treatment become more severe, it seems the atmosphere of the house becomes less tolerable. It becomes clear the “treatments” being administered to Eli are not making him better. Eli’s parents do not believe his claim that the house is haunted and neither does Dr. Horn. The only person he can confide in is a girl, Haley (Sadie Sink) who lives near the center and with whom he talks to through windows.

She is the only person he can tell about a ghostly message left on his window: “LIE.”

“Eli” does frighten and does it well. The system of treatments and the experience of navigating an illness are used to create unease, tension and fear. Eli is physically taxed by the medication and is given little information about what is being done to him or why. In fact, when he reports pain, he is told that means the medicine is working, but he was not warned about the pain ahead of time. His questions are not always answered, his experiences — frequently distressful to him — are frequently disregarded and he is repeatedly told to just trust the doctor.

It’s a horror film that feels personal — but not in the ways I expected. As a person with chronic illness who has navigated multiple doctors, treatments and systems since childhood, I felt the film was provocative and engaging at times in a good way.

Much of the dialogue — with emphasis on trusting providers and restricting information — reminded me of small exchanges I’ve had with providers that made me feel uncomfortable, unheard or even abused. For me, seeing these things in a horror context was empowering and validating.

When the family first arrives at the treatment center, Eli has a direct exchange with Dr. Horn:

The avoidance of a direct question from someone who is supposed to supervise your body or mind feels so ominous. I’ve had that happen, frequently. When I’ve had feelings about lack of transparency, I’ve been discouraged from questions and told to just trust the doctor. Seeing similar exchanges happen in this movie and contribute to an environment of tension, discomfort and fear validated my feelings in real life.

To be clear — it is a horror movie with some unexpected twists. There has been some mixed reception to the movie as a whole: Is it brilliant how the story can take the viewer by surprise or is it a confusing mix of stories thrown together? There have been criticisms that the ending may not be fully satisfying and that the story is too slow to unfold. For those who are real fans of horror: the movie takes its time to establish what type of scary movie it actually is.

For those who are “jumpers,” there are not a lot of points where the movie takes advantage of sound to get a scare. For me, the scary parts were when something was suddenly revealed or noticed.

I really do recommend this movie, but it is not for everyone. It involves many elements of horror that I like.  While it managed to surprise me in some ways, I also felt it was at risk of running off the rails because the story didn’t seem finished. There are some hard parts involving medical treatment, but in general, the themes were rewarding. I love how power in real-world systems is used to develop fear in the film.

“Eli” has English Closed Captioning and Audio Description. Subtitles are available in French, Spanish and Chinese.

Share
or  Copy Link
Link copied to clipboard.
Be first
583 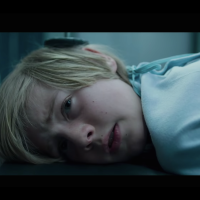