The Metaphor That Helps Me Explain My Journey With Depression

Imagine for a moment you are the captain of a miniature wooden ship. Your vessel sits stoically inside a bottle, and you wait each day for the miniaturist to gaze upon his creation. You were carved with care from a loose branch left over from last year’s Christmas tree, and you were glued to the base of the ship within the bottle. You know only of what you see. The magnificent sails, towering five inches above the deck. The sturdy hull of the ship. The warped view of the room beyond the glass, where the miniaturist comes to work.

One day, you think to yourself, “It’s cramped in here, isn’t it?” The glass enclosure feels more confined than it typically does, and the ship’s periodic creaks pierce your mind like a migraine attack. But you push the thought away. You’re the captain of the miniature wooden ship. This is your home. This is where you belong.

Weeks go by without seeing the miniaturist, and you think to yourself, “What exactly am I waiting here for? Is he gone for good? Maybe I should go looking for him this time.” The days either feel too short or too long now, but you push the thought away. You’re the captain of the miniature wooden ship. The miniaturist will come back.

But you do start to think. You wonder about what else lies beyond the glass. Beyond the room beyond the glass. Things you’ll never get to see, as long as the soles of your feet are glued to the deck. Is life as the captain of the miniature wooden ship all you will have to look back on at the end?

On a hazy afternoon, the miniaturist’s son enters the room beyond the glass. In a fit of youthful exuberance, he careens into the desk on which the bottle is perched. Free-fall ensues. You lie on the hardwood floor surrounded by shattered glass shimmering in the lamplight, among shards of painted wood. The magnificent sails that towered five inches above your head. The sturdy hull. Gone in a moment.

Exposed finally to the room beyond the glass, relief takes the place of where confusion, frustration and claustrophobia once resided. At last, you feel free.

Later that day, the miniaturist comes to inspect the crime scene. He gently lifts you from your resting place. His hands are like dunes on an ancient beach, shaped and hardened by the changing world. “Finally,” you think, as your eyes meet his for the first time, “He’ll take me somewhere else. First the glass, now the room beyond the glass. I must be on a lucky streak.”

Then, he places a new bottle on the desk. A stronger bottle. And he gets to work. With the precise movements of a conductor, he constructs a new ship within the bottle. A stronger ship.

When the ship is completed to his satisfaction, he coats the soles of your feet with glue, and he places you back inside, where you once stood. The magnificent sails tower over you. The sturdy hull stands pat. You are the captain of the miniature wooden ship once again.

How do you feel? Did you understand the captain’s attachment to his creator? Did you think there was even a shred of a chance he would find freedom? Most importantly, did you feel empathy for him?

If you did, you likely have an understanding of how depression and anxiety affect someone under real-life circumstances. Feeling as if the walls are closing in on you. The frustration caused by uncertainty. The depression shaping your perception of the world around you — warping your mind until you start searching within depression itself for meaning. The confounding ways depression makes you think you need its steady hand to survive. The acceptance at the end that there is no escape. Depression manifests in irrational ways.

I started this story by trying to create a metaphor describing how I feel because I often find it difficult to talk about or write about myself in earnest. That might come as a shock to anyone who has ever heard me speak (if you’ve ever been within a 300-yard radius of me at any given time, you know how well these golden pipes carry), but I avoid details on my professional and social lives like they’re someone from high school caught in my periphery at the bar. Nevertheless, here I am, sitting on a bench in Central Park, laptop in hand, trying something I’m awful at. Here goes nothing.

I’ve been depressed since 2015 — maybe it’s been longer, but it makes me sick to my stomach to try and recall a specific jumping-off point. So, we’ll go with 2015. I was in my junior year of college, coming off two of the most fulfilling, exciting years of my life. New friends. New studies. A completely new environment.

What followed was not a continuation of those feelings, but an introduction of my new best pals: dread and insecurity. I began feeling uncomfortable even when surrounded by my closest friends, unable to be myself — or even know what it means to “be myself.” I didn’t feel at home in the social organizations I joined. I felt I couldn’t be a compatible romantic partner to my girlfriend without putting on an act. Thus, spawned, “The Connor Show.” Complete with its own tagline — “It’s on even when you change the channel!”

It was an emotionally taxing spring semester. A death on the campus hit close to home. It was my first brush with trying to comfort someone in mourning. When you already feel like less of yourself, and you have to give whatever you have to someone else when they need you, what do you have left at the end of the day? On top of that, the newfound stress of planning for my future began weighing heavy. When my classmates were all celebrating their thrilling summer internships, I was sweating in the library, wading through a sea of phantom email addresses that wouldn’t respond to my requests for an interview. Days were spent with clenched fists and thoughts of starting over from the beginning. If I couldn’t even get a foot in the door of an industry I had been studying for the past three years, what was going to happen when I graduated? I didn’t have hope for my future, only fear and crushing disappointment. Though I was surrounded by thousands of people I considered peers, I felt more alone than ever.

In late April of 2015, I had my first panic attack. I was in the back seat of my car traveling to Charlottesville, Virginia for an outdoor festival. After an ill-advised 9 a.m. cocktail and a condemning text from a classmate, I broke down. Crying fits, self-hatred and a declaration of, “I think I’m having a heart attack” are not exactly how you want to start a morning. My heart rate was uncontrollable. It raced to the beat of a belligerent post-progressive bass drum, and then it slowed to a dull pulsation of a lighthouse beam on its last graveyard shift.

When the attack subsided, I emerged from my humble Honda Accord to siphon Franzia wine from any red Solo cup I could find. It was seek-and-destroy. I proceeded to wander the rain-soaked grounds to find a secluded spot to sulk in solitude. I had no way to leave. I had no concept of what time it was. What was there left to do besides drink until I couldn’t feel anymore? I had never felt weaker. Later that week, I decided to meet with one of the university’s mental health counselors. A first step toward what I assumed would be a swift and passive rehabilitation.

I want to say quickly that this is not a plea for you to RSVP for some retroactive pity party. Everyone deals with hardships. I wish for you to feel empathy, like you did for the captain of the miniature wooden ship.

Years have now passed since that volatile spring semester. Some days are better than others, but the depression and anxiety have not gone away. I still get sporadic panic attacks. I still feel dread, insecurity, disappointment, frustration, isolation and uncertainty every day in some capacity.

When I’m faced with having to make a decision or interact with someone under any circumstance, I feel as though I lather myself head to toe in wet glue, unable to move. Someone comes along and hangs a sign around my neck that reads, “Unfinished. Do not touch.”

Some days I even seek out my depression — I want it to come knocking on my door late at night. That may sound counterintuitive, but the captain wished to seek out the miniaturist all the same. I lie awake past midnight and paint extravagant excuses for my aversion to intimacy, my emaciated self-worth. It is my own Sistine Chapel ceiling. My magnum opus.

Good days still manage to emerge from the fog with some regularity. They come slow, burn fast and smolder. They feel like bonfires in late November. Like the crescendo of a stadium roar at a Sunday afternoon baseball game. Like your favorite band coming out for an encore and playing your favorite song. They’re here when they’re here, and they’re gone when they’re gone.

But this isn’t the story of a man consumed by his depression and anxiety. It’s the story of a man in recovery. Therapy and medication have helped ease me back to a place where I feel at home, but it hasn’t been the swift, passive path to normalcy that I was crossing my fingers for back in 2015. This story has taken years (and immense emotional turmoil) to craft. I only recently opened up about my feelings to some of my closest friends and family. I’m not comfortable opening myself up to the scrutiny of public forum, yet here we are. I’m just tired. I’m tired of feeling this way, and I’m tired of feeling as if I don’t have the authority to speak or write about it.

Some people don’t know how to respond when you tell them you’re depressed. Despite best intentions, a helpful remark can sound more like a reprimand — as if you’ve made a mistake, and you don’t even know it. It’s tone-deaf and frustrating. In opening up about my depression, I’ve been met with that reaction quite frequently, but I’ve also received plenty of understanding and compassion. Those are the people you have in your corner. So often I have to remind myself this is not a battle I need to fight on my own. Fuck a cliche, but that’s the truth.

Each day brings slightly more clarity. Something does exist beyond the room beyond the glass. I don’t need to seek out the miniaturist if I don’t see him. I’m not better. I don’t know when I’ll be better. But I know that until that day comes, the captain of the miniature wooden ship will be keeping his head high and his middle fingers higher. Sail on. 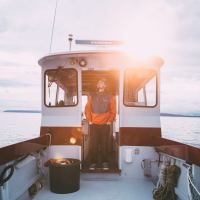