Why I Don’t Tell People I’m a Veteran

Whenever Veteran’s Day rolls around I think about two things. The first is the free breakfast at Denny’s. But the second is why I don’t like talking to people about my time serving in the U.S. Army.

Let’s go back to the year 2009. Back when it was even harder to get a job at a young age if you can believe that. I had run out of employment options and had given up on my dreams of being a movie star. So naturally I chose to enlist in the Army rather than succumb to a life of persistent failure. But fail, I did.

Although Basic Combat Training was the most difficult thing I had ever done in my life, I survived. The best lesson I learned — and the one I pass on to people who may be thinking of enlisting — is that it is not so much about the physical toll it takes on your body, but rather the mental toll it will take on your mind. Even though my subsequent training to become a Military Intelligence Analyst (35F) was much easier on my joints, my mental health spiraled out of control as the weeks went on. The coursework was exceedingly demanding and overall morale in my unit was low due to verbal abuse by our platoon sergeants. I wasn’t the only one to crack under the pressure but that certainly was not a consolation.

One day I had a complete breakdown in the dining facility which led to me being frozen in a catatonic state for my fellow soldiers to gawk at as I was carted off to the emergency room. This eventually led to my “honorable” discharge as well as a diagnosis of bipolar disorder. However, I felt anything but honorable at the time. I felt like I was a complete disgrace to my family and friends. I hid the diagnosis from everyone even as it became obvious that my mental health was worsening week after week and year after year. Many vets get discharged for mental health reasons that are a result of the horrors of war  — but here I was, someone who couldn’t even handle the training.

Thankfully, I’m alive today to tell my story without shame, but one thing that’s still painful for me to speak about is my time in the army. Because undoubtedly someone will thank me for “my service” and then ask how long I served. When I tell them I was only in for eight months, I can see their facial expression change as if they’re sorry they ever asked. It’s even worse if they’re a vet because the disappointment is palpable. It’s the only time I feel badly for being thanked for anything because it doesn’t feel earned.

So even though I’m more at peace with the experience, I still struggle identifying as a vet. Especially being around other vets who served full terms and saw combat. I try to avoid Veteran’s Day and Memorial Day events and absolutely hate having to go to the VA hospital. I feel like a fraud walking into places like that, seeing people with missing limbs and war medals who actually deserve to be thanked and celebrated. But I can’t just erase or deny that part of my life. It feels like a distant dream at this point; as if it occurred in an alternate timeline. But it did happen and I have to be open about it like how I am with bipolar depression and mania. So even though I still cringe whenever I call myself a vet, I say it knowing it was a major part of my journey that has made me the person I love today.

And that’s something I can salute.

Share
or  Copy Link
Link copied to clipboard.
Be first
27 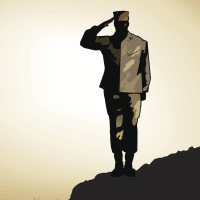