I remember my first panic attack; it was in high school during one of my math classes when we received a test back. Math was never one of my strong suits, but I studied ridiculously hard and felt quite confident going in. When she handed me the failed test, my heart started to race exponentially, and I realized I couldn’t catch my breath. I fell to the floor as my ears filled with the pound of surging blood; I couldn’t hear her yell at me to get up and “stop faking” before she grabbed my forearms and escorted me out of the class. I had no idea what just happened to me, but as I calmed myself down (eventually) I remember an automatic thought:

It was only three years later, in one of my counseling sessions, that I realized I was, in fact, not “crazy.” Three years of overthinking what I did to let myself experience sudden panic. Luckily enough, I didn’t encounter another panic attack during that time. When I asked the counselor if this was an issue to monitor, she automatically said no. I listed off other symptoms to her that I was going through — fatigue, irritability and difficulty sleeping. She brushed everything off, and the clinic prescribed me some sleeping medication. I was in college at this point and was quite eager to get a full night’s sleep, so I didn’t ask any questions.

This was the start of my love/hate relationship with medication. I soon became addicted to these pills and couldn’t even put my head down without slipping one down my throat. When I ran out of tablets and couldn’t get my refill right away, I started to worry about how I would even fall asleep. For three straight days, I was wide awake in worry over the lack of sleep. I was restless, couldn’t concentrate on my classes and was called a “walking zombie.” At the end of day three, I finally gave in and popped one of the other sleeping medications in our house. When I woke, I knew there was more to my mental state than just lacking sleep, and I ditched my first therapist (and the prescription).

Doing so was liberating, and I was even hopeful I would find another therapist who could better determine what was wrong. I was firm on figuring out a solution, but I had no idea it would take over a year and a move to Ontario to do so. The last year I lived in Quebec was hard, and I desperately needed help, but my eyes were set in Ontario. That was the only thing pulsating through my head. In actuality, the trauma I experienced helped me and my psychotherapist determine the root of all my worries. Since my panic attacks were so few and far between (I can count them all on the one hand), my diagnosis was generalized anxiety disorder (GAD). I enjoyed him as a professional; he made me open up about a lot of things I will eventually outline in my writing. I stopped going to him once I got diagnosed. I moved closer Downtown, so getting to him without a car was awkward, and I tried to convince myself I could handle it. The next five years were an experience and a half.

Finding the right help and diagnosis might take a long time, so don’t get disheartened. I don’t want anyone in my shoes to make the same mistake I did.

A version of this article was previously published on the author’s blog.

Photo by Annie Spratt on Unsplash

Share
or  Copy Link
Link copied to clipboard.
Be first
220 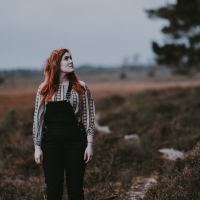