How the Right to Die Movement Disrespects People With Disabilities

In the last few months, the practice of assisted suicide has finally managed to bleed into the liberal Northeast. Here we go again, I guess: nothing matters but autonomy. Not disability rights, not universal human equality, not prudence: only the honeyed promises of a pseudo-progressivism that regards death as a personal choice. Surely politicians in those states are aware of the warnings that disability rights activists have given about the dangers of that practice, but from what I’ve seen, they have chosen to ignore us. From what I’ve seen, one of the major reasons for our voices having been ignored is propaganda that ignores uncomfortable facts about the implications of legalizing assisted suicide.

For instance, in 2014, Brittany Maynard’s move to Oregon made national headlines. Despite the fact people move to take advantage of different state laws all the time, this run-of-the-mill decision was framed as reigniting the right to die debate. Given the plethora of individuals who move across state lines on a daily basis, Maynard’s actions really didn’t strike me as newsworthy. However, Maynard teamed up with Compassion and Choices, and in media coverage her actions went beyond rational criticism or reproach. During Maynard’s campaign, she and her family assured citizens that what she viewed as “aid in dying” would only be used for people with terminal illnesses. Despite the opposition of a plethora of disability rights groups such as the National Council on Disability, ADAPT, ASAN, Disability Rights Education and Defense Fund and Not Dead Yet, any suggestion that this practice could abnegate the rights of people living with disabilities was dismissed as hysteria spurred by secret religious convictions.

Hence, I was disgusted, but not surprised, by one of the comments that was made during a 2015 New Jersey hearing on assisted suicide I attended. One of the proponents who was not terminally ill said, “Well, this may not be politically correct, but I’ve been here all day and I’m going to give it to you as I see it: if this bill passes, it would be the first rung in a ladder of autonomy that all of us should have. I don’t really believe we should be terminal in six months. I might want it, especially if, and this is another no-no, I might become a burden. I’m 78, my children are OK, so it’s OK if I go now.”

Did the governor not encounter sentiments like this, or does he just not care?

One might respond that this was just one person sharing his opinion, and that’s true. However, a few weeks before the hearing, the Washington Post published a piece suggesting that perhaps people with “acute mental suffering” should be allowed to die as well, in the process betraying anyone living with serious psychiatric symptoms. As someone who has experienced episodes of such symptoms, I took the article as an expression of deep disrespect for me and my peers. At the time, I was doing everything I possibly could to keep my depression symptoms in remission. Every day, I ate well and exercised. I took medication without fail and attended therapy twice a week. Whenever I had suicidal thoughts, I immediately personified them as “the depression talking” and “told” the depression to go “screw” itself.

I feel publishing that article was an extreme expression of how little the editors of the Washington Post cared about the well-being of the people with mental illness who would inevitably read it. It was a sophomoric exercise that reflected a deep sense of entitlement.

The New York Times took a similarly rude approach when it published a 2015 article, “Helping a Suicide When the End Isn’t Near” on its online forum for all people with a mental illness to read. Again, I have to wonder what the editor of that page was thinking. The guidelines from the World Health Organization say it is irresponsible to present suicide as a solution in any context whatsoever. The apparent exception of people with disabilities from this mandate shows the deep contempt that society still has for us. If we were not second-class citizens, media moguls like the New York Times wouldn’t publish articles suggesting all the broken, hopeless “defectives” across the nation should have the right to put ourselves out of our misery. The paper would not publish such pieces because the editors would be too worried about backlash from the social justice movement. It seems that because disability rights continue to receive mere lip service in public dialogues about civil rights, the papers published this piece without any pushback from the broader civil rights movement.

People with mental illnesses already face serious discrimination in the occupational, educational and personal spheres, and now we are having our suicides validated in the national news. The lack of basic respect behind this development is appalling.

Moreover, in reading pieces that advocate for the extension of assisted suicide to people with mental illnesses, I didn’t see any follow-ups giving people with psychiatric disorders the chance to respond to this denigration. One would think the newspapers validating our dangerous impulses would want to give people with those disorders a chance to defend ourselves.

The fixation on these stories at the expense of any other concern has left me with deep sense of indignation toward the right to die movement, its representatives and its narrative.

Very often, proponents cast opponents as people who are frightened of being murdered if society legalizes assisted suicide. However, from talking to other activists in the disability rights movement, I feel comfortable saying the people I know are not motivated by fear. Rather, disabled opponents are motivated by self-respect. I know I’m not afraid I’m going to be murdered; I am angry that the powers that be have subjected people with disabilities to third-class citizenship in the service of this debate. The mainstream media constantly touts the narrative that “aid in dying” is for the terminally ill, while they simultaneously publish sophomoric musings about that longed-for day when assisted suicide will be extended to people living with painful disabilities.

Hence, I feel as though the right to die movement, its superstars and its enablers have essentially demanded that people with disabilities not use our brains. The fact that extending assisted suicide was validated in our most prominent publications shows that those of us with disabilities who oppose that practice are not being “hysterical,” we are using powers of logic and deduction. Moreover, when considered in respect to the evidence surrounding us, the notion that our opposition to assisted suicide motivated by religion is vapid; it is a lazy, easy way to gaslight us and ignore practical concerns about a significant public policy change.

As a person who has lived through intense psychiatric symptoms, it strikes me that politicians who have allowed themselves to fixate on one person’s story and on the right to die movement’s conception of “autonomy” have chosen ignorance. Surely they must be aware of the campaign to extend assisted suicide to people with disabilities; articles extolling the proposal have appeared in major newspapers. Ergo, it strikes me that the right to die movement is not only misguided, it is willfully ignorant. If I ever had any doubts about my opposition to assisted suicide, they have been negated by the right to die movement’s determination to march ahead no matter how badly it denigrates and disrespects people with disabilities.

It’s sad that many of our government’s leaders have chosen to ignore that pattern.

If you are a disabled person who is having suicidal thoughts, visit the LiveOnProject, a suicide prevention resource for the disabled community.

Photo by Josh Appel on Unsplash 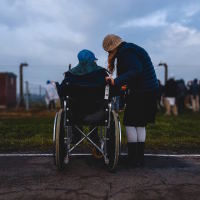