My husband served 11 years in the United States Army as a tanker/armor crewman. He did four deployments to Iraq and experienced quite a bit while he was there. With his permission and guidance, we write this article to give his perspective on life outside of the military.

This is what he believes is misunderstood by civilians and wishes they knew.

1. A lot of veterans with post-traumatic stress disorder (PTSD) were young when they experienced trauma.

When 9/11 happened, many young men and women made the decision to enter the military knowing they would be going to war. This means many of our soldiers overseas were between 18 and 20-years old. They experienced many different levels of trauma during this time, including many explosions, people dying, suffering amongst adults and children alike. Now that some of them are veterans, and no longer in an active duty status, they find the things they experienced while deployed affected them more than they realized.

2. We are still “normal” people, our brains just function differently due to trauma.

Due to the things experienced while deployed, a veteran’s brain could be stuck in fight-or-flight mode … for years in some cases. As a result, vets can be affected negatively by things civilians think are fun. For example, large crowds and loud noises (fireworks) could be anxiety–inducing and put them “on guard.” This is a feeling a lot of veterans would rather forget.

3. Civilian perception of the outside world is drastically different from the military perspective.

When a soldier goes overseas, it is different than going on vacation. Perception of the same country could be viewed two entirely different ways. Tourist areas tend to disguise poverty, suffering and violence. The reality of these areas is seen by our deployed veterans. The horrors of today’s society include someone’s hometown becoming a war zone, and not being able to ensure their safety.

4. The way veterans speak is not meant to be rude.

They are not trying to be rude. The military is a culture in itself. Soldiers are being trained to protect our country and fight for their lives. Oftentimes when veterans talk to each other, civilians may view it as harsh, snarky or rude amongst other things. Being friendly with one another might include name-calling or “roasting each other,” but at the end of the day, they are family and this is their “normal.” It’s all in good fun.

5. You spend more time with brothers and sisters in arms than you do your family.

These people who you see, live and work with every day — they become your family. You love and support each other, and in some cases, lay down your life. This kind of bond cannot be experienced anywhere else. Between field training and deployments, that is a lot of time not spent with your family. That being said, homecomings can be especially difficult. A lot of vets feel out of place, like they missed everything. Life events come and go while they are gone, and there’s no making it up. There is a sense of uncertainty. When you’re deployed, you know what you’re doing every day, not so much when you come home.

These are just a few things my husband experiences every day. He hopes this sheds a light on a previously sheltered subject. Together, he and I hope to open up a door into our everyday lives to help others in similar situations who are struggling. This life is not easy, but we wouldn’t change where we are for the world. 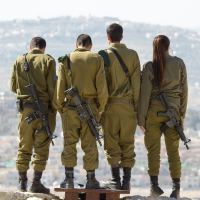