CBS This Morning highlighted in their feel-good segment, “A More Perfect Union,” a plan that enables surgical patients to pay off their doctor’s fee by doing volunteer work in the community.

Demetrio Aguila, M.D., a neurosurgeon who specializes in peripheral nerve pain, offers patients three options: pay the part of his fee not covered by insurance in full at the time of service, arrange a payment plan through a third party or do community service.

Meet the surgeon who started a program that offers patients the option to pay for surgery by volunteering for local humanitarian groups. ❤️️https://t.co/2jrzVyEYze #AMorePerfectUnion pic.twitter.com/NsqZTV7iid

Sounds like a good idea, right? Well, maybe not so much.

The idea is attractive on the face of it. An example given on his website explains that if an insurance fee is $5,000, a patient would need to donate 250 hours of community service to pay for their surgery — so every hour of community service a patient does knocks $20 off their bill. Of course, it can take a while to hit the payoff mark. One patient profiled in the CBS segment needed to do 560 hours of community service to pay his bill. That comes out to more than three months of full-time work. The patient recruited 105 other volunteers to help him pay off his debt in a more reasonable time frame.

It leaves the question of what should patients who can’t round up dozens of other volunteers do? Who can afford to take over three months off work to work for a charity? And not just any charity — it must be one of the medical practice’s “partner charities.” Patients aren’t quite “volunteering,” rather they are “volunteered” to work with one of a few specific organizations. Personally, I might choose to work for Animal Rescue or Planned Parenthood or the public libraries, but what if all I was offered were Christian charities and I happened to be Jewish or Buddhist or atheist?

The “solution” also doesn’t cover the real costs of surgery. The doctor’s fee is paid, but what about the hospital room charges, medications, therapy, anesthesia and the myriad other costs not fully covered by insurance? Patients might be left to pay those by themselves. And what insurance doesn’t cover can add up to a hefty sum. Good luck getting 100 friends to help pay that off.

And for those stuck with even greater insurance-denied bills, the situation is grim. One Georgia family was stuck with a $325,000 medical bill for a daughter’s brain tumor that they said their health plan provider refused to pay for. If Dr. Aguila’s plan were available to them, they would still have to put in over seven years of full-time volunteer work to pay it all off.

The scheme places poor people, who cannot afford expensive surgery — and especially those without insurance — in a place where they must work, if not for the doctor, for his surrogate charities. The idea of “working off a debt” creates nostalgic feelings for the days when a child who broke a neighbor’s window with a ball would do chores to pay for it. But this is serious business.

Paying a debt to a doctor by working for charity smacks of “paying one’s debt to society,” a thing we require of criminals, perhaps in lieu of fines. If this makes you queasy, it should. An injured or ill person has no such debt, since she or he has in no way “wronged” society. Neither has the patient “wronged” the doctor, only chosen to use his services.

For many, the only option is GoFundMe, now a major source for paying off medical bills to avoid bankruptcy. Forbes reports that “one in three campaigns through GoFundMe are for medical costs” and “there are over 250,000 medical campaigns per year raising $650 million each year.”

It’s unclear if the charity model of “payment” will take hold in practices other than Dr. Aguila’s. If it does, a lot of patients will have one more tough decision to add to their already-full plate. While stories like this might make people who aren’t sick “feel good,” it can’t distract us from the work we have to do to ensure medical care is affordable for everyone.

Share
or  Copy Link
Link copied to clipboard.
Be first
112 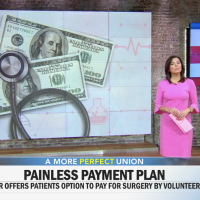