When you think of pain, most people think of a burn, a broken bone, or even a scrape. I too, think of those as painful, but I find the shower pressure and the goose bumps incredibly excruciating. Others might find it strange, me saying this, but it is true — and it’s all due to my central pain syndrome (CPS). I am so overly sensitized that some of the very things everyone loves I despise.

There have been and still are so many days that I curl up in a fetal position trying to get the goose bumps to stop hurting. I try to do what I can to warm up, including rubbing my arms so hard I’m surprised my skin hasn’t fallen off. I have learned that the heated blanket is my best friend and if I could take it everywhere with me I probably would.

I used to hate showering when I was younger, not because it hurt, but because it took time away from doing what I wanted to do. Looking back, I wish I hadn’t taken it for granted. Now, from the moment I step into the shower I end up combining shampoo and conditioner in one step just so I can get out that much faster. Don’t get me started on shaving. My skin burns for days after.

The things that my brain knows are supposed to hurt still hurt, but because of my body, I don’t always realize it’s an injury. I separated my shoulder a little over a year ago. I was in a lot of pain, but the X-rays were clear and I was told it would take a while to get better. Six months in, I wasn’t any better and after going through an injection, resting, icing and anti-inflammatories, my doctors decided on surgery to remove the swollen piece of the collarbone. Thankfully, they did find a piece of broken bone hiding that the MRI had never picked it up. At that point, I had a broken shoulder for 10 months without ever really knowing because I thought it was my CPS acting up.

Everything has its good and bad points — even having health issues. My CPS has helped me develop a higher tolerance for pain. On the other hand, mostly everything else about life with CPS, like having issues with my goose bumps or the shower, is not easy.

We tend to take our daily tasks for granted, as they come easy for most of us, well, at least until it’s gone. I miss the days of wearing whatever I wanted because most times my body can only handle sweatpants. As you probably guessed, my skin will itch, bruise and make marks from wearing leggings and jeans for too long.

I try to let people close to me in, but it can be hard especially if someone doesn’t understand what I am going through. I find the best way it explain it is by describing how it feels using descriptions everyone will understand. Some of my favorites are wanting to “rip my skin off” because of the goose bumps, or comparing showering to the feel of razor blades.

I hope that one day we won’t be a society that only believes pain is real when it is physically seen. We are all human, and pain is pain.

We don’t realize how good we have it until something is gone, and for me, that is being able to survive the cold and being able to deal with a simple touch.

Together, as warriors with chronic illness and pain, we can help each other to be strong. 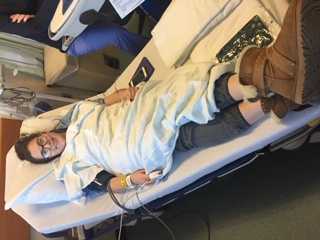