“Joker” let viewers in on the backstory of one of Gotham City’s villains, Arthur Fleck, aka the Joker. Arthur is depicted as having symptoms of a serious mental illness, and his dark and sometimes suicidal thoughts land him in the hospital. He wants therapy and medication, but hospital budget cuts lead to the discontinuation of his medication, and Arthur turns to violence.

“With all of this backstory, Arthur eventually takes his suicidal impulses out on others,” wrote Mighty contributor Mindy M., adding:

He goes to a dark and disturbing place and becomes a very ugly, homicidal person. He says in the film that this is because he is forgotten and neglected in his mental illness. Some people with mental illness may be offended and put off by this. Most of us would never be capable of such carnage, but this film does depict and outright declare untreated mental illness in Arthur as one of the primary drivers of his homicidal behavior.

Congratulations to Joaquin Phoenix on his first #Oscar win for Best Actor for his performance in #Joker. pic.twitter.com/L97xazplQD

The film was a smash at the box office, and became the first R-rated film to earn over $1 billion. Even those with mental illness found many aspects of the film resonated with their experience of mental health, even if it was triggering or disturbing at times. But many experts and advocates worried that films associating violence and mental illness could increase prejudice toward people with mental illness. Researchers in New Zealand put the theory to the test in a study of 184 moviegoers.

Researchers gave surveys to two groups of participants before and after watching the films “Joker” and “Terminator: Dark Fate” as a control film. “Terminator: Dark Fate,” starring Arnold Schwarzenegger, was also released in 2019 as a sci-fi action film that didn’t include overt references to mental illness. Participants completed the Prejudice Toward People With Mental Illness (PPMI) scale to allow researchers to measure prejudice.

The study found that viewers who watched “Joker” reported a slight increase in prejudice following the film. Their prejudice score increased from 2.99 before the movie to 3.20 afterward. Those who saw “Terminator: Dark Fate” actually reported decreased prejudice, with a score of 2.91 before the film and 2.88 afterward. Researchers highlighted that those with lived experience of mental illness reported less prejudice overall.

It’s not uncommon for members of the general public to associate violence with mental illness. For example, President Donald Trump suggested in August 2019 that gun violence in the U.S. might be reduced by reopening mental health institutions. Statistics suggest, however, that people with mental illness are far more likely to be the victims of violence as opposed to perpetrators of violence.

The new study in JAMA validates that media representation of people with mental illness as violent impacts public perception. However, the researchers did not investigate whether a change in attitude leads to a change in behaviors toward people with mental illness. But they did note that increased prejudice may lead to “self-stigma” and prevent people who are struggling from reaching out for help when they need it.

“In ‘The Dark Knight,’ Joker asks, ‘Why so serious?'” the researchers concluded their letter. “One might level that question at us, arguing that ‘Joker’ is nothing to be concerned with. However, what this view ignores is the profound consequences prejudice has on those with a mental illness.”

Share
or  Copy Link
Link copied to clipboard.
Be first
330 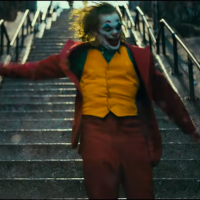