12 Signs You Grew Up Having Your Chronic Illness Invalidated

For people who live with chronic illness, it can be an all-too-common experience to have your health issues dismissed and invalidated. Kids who grow up with chronic illness may not even realize their symptoms are being dismissed because they have been taught the adults in their life know best.

There are many reasons children may not have their chronic illness taken seriously from parental negligence to doctors being unfamiliar with the way the condition presents in kids. The experience of having chronic illness not taking seriously can take an emotional and physical toll. The Mighty contributor Eliza Lee wrote about how hard she pushed herself in school to try and meet her teachers’ expectations:

No matter how hard I push myself, odds are I’ll never be able to do that. I know that because I’ve tried. I did a full week of lessons. Every day I’d go into school for eight hours and I would work. After one day in school I was exhausted and every bone in my body felt like it was on fire. I thought it must be normal though and because of this I carried on. The more I pushed myself the worse I got.

We asked The Mighty community to share signs that they grew up having their chronic illness invalidated. Check out their responses below of messages that they were told or how the invalidation made them feel, some of which you may relate to all too well.

“I felt like a chronic complainer or a hypochondriac. It made me become very stoic about my pain and undermine it to everyone including medical professionals because, deep down, I don’t think they will believe the level of pain I am in all the time. And I feel and have felt since I was quite young, society just wants me to put on this mask to make it easier on Them. That my experience isn’t a valid one to express without embarrassment.” – Nikki A.

“I felt like a liar and like a hypochondriac. I was told I was lazy that I just didn’t want to go school.” – Vicki H.

2. ‘Everyone in my life told me I’m lazy and too young to feel the way I do.’

“Everyone in my life told me I’m lazy and too young to have felt the way I did. There apparently wasn’t actually something wrong. Until I got an unrelated blood test years later, and there was something wrong. The nurse called with the results and said I was anemic and have Hashimoto’s disease.” – Kami S.

3. ‘I would talk about my fatigue and get the response, ‘We’re all tired.”

“Any time I would talk about my fatigue I would get the typical response, ‘We all get tired, but we still have to get things done.’ For so long this attitude prevented my mom from taking me to get medical attention. Being so young, it took me a long time to realize that it wasn’t normal and something was wrong.” – Kennedy M.

4. ‘Nobody ever believed me when I said I couldn’t breathe if I ran.’

“I didn’t realize growing up that I had mitochondrial disease, I was only recently diagnosed, but I was always last in gym class and everyone accused me of being lazy – including the teachers– all because I looked healthy. Nobody ever believed me when I said I couldn’t breathe if I ran, or if I felt lightheaded. It made me start to believe I was just lazy.” – Katie B.

5. ‘They would just say it is growing pains and pass it off.’

“Anytime I said I was hurting or tired after only watching TV or doing my homework, my parents would pass it off as me over-exaggerating or being lazy. With doctors, when I would tell them my bones always hurt, they would just say it’s growing pains and pass it off. I never felt heard or cared for.” – Victoria M.

6. ‘Everything was attributed to my weight.’

“I started putting on weight in third grade, so my health issues were attributed to that, even though I had all of these issues when I was at a healthy weight too. So frustrating ” – Terri D.

7. ‘My diagnosis was delayed.’

“Invalidation led to a longer time without a proper diagnosis.” – Lalac

8. ‘I truly thought I was imagining my pain.’

“I truly thought I was imagining my pain. I am now in my 40s and am still being diagnosed with what I was dealing with since my childhood. I cry when I’m diagnosed because now because I know I’m validated.” – Alicia M.

9. ‘I felt different from everyone else.’

“My illness might be invisible, but as a child, I felt like I had a sign around my neck that said, ‘she’s a fake.’ Thankfully I grew out of feeling that way. I know now that I’m worthy of being believed and that there is absolutely no shame in having a chronic disease or being on disability.”  – Julie P.

“My symptoms started at six years old but I was misdiagnosed for two years. My parents were told that it was all in my head and that I just wanted attention so my mom quit her job as a flight attendant to be home more. Then they were told I had anorexia. I couldn’t eat because I was in so much pain. Then I was finally diagnosed with Crohn’s.” – Lauren B.

11. ‘It was the most destroying feeling I’ve been through.’

“I think a lot of people will always discuss the difficulties with family and friends understanding your conditions all the time but it’s even harder when doctors who are meant to be there for you, do not believe your condition. That’s the most destroying feeling I’ve been through especially as a child!” – Georgia P

“It feels that you can’t do anything in life and that I deserve the pain.” – Rahul K.

12. ‘I learned to hide my symptoms and never mention them.’

“I quickly learned to hide my symptoms and never mention them.” – Vanessa B.

“I put off getting medical treatment because I was told my problems aren’t that bad and I wouldn’t be taken seriously anyway.” – Joceline R.

If you grew up feeling that your chronic illness was invalidated, you can share comments that you were told in the comment section below, or by posting your own Thought on The Mighty.

Share
or  Copy Link
Link copied to clipboard.
Be first
296 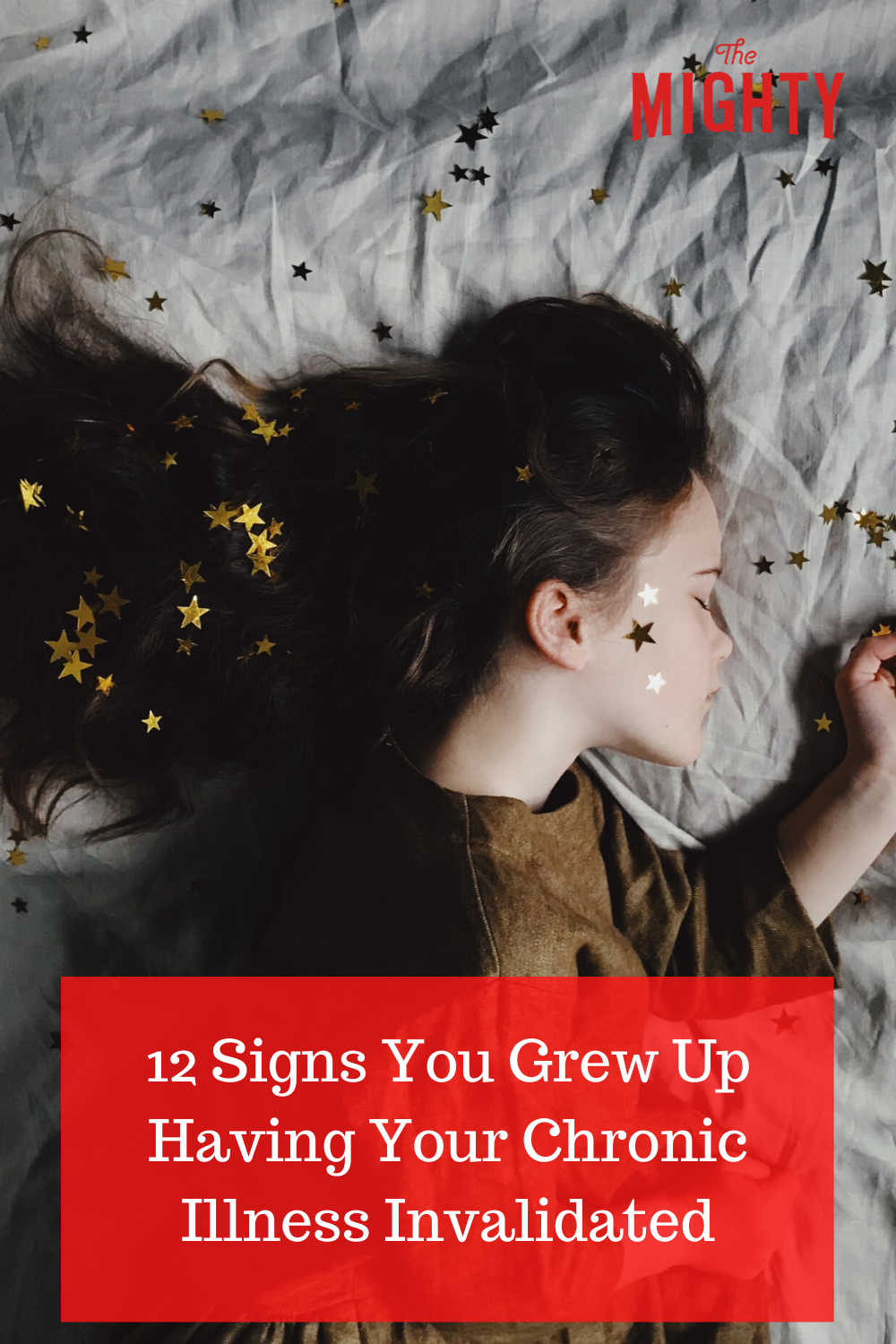