When Others Offer Unsolicited Advice on My Anxiety

Unlike many, I haven’t had anxiety for “as long as I can remember.” Actually, for a long time, I was certain my mannerisms and behaviors were simply “quirks” that made me a little different from the norm. I hope you can feel the sarcasm when I now look back and think, “newsflash: those quirks were symptoms, genius.”

I didn’t parade those quirks around, because I knew I wasn’t special. I had two people in my life who have their own idiosyncratic gifts, some of which were passed down to me (Hi Mom and Dad).

After she’s interacted with people in some capacity, The Mothership, as I affectionately call her, likes to have her chill-down time. It’s a “reset” when the overstimulation of the outside world gets to be too much. Some veggies and ranch and a book, magazine or newspaper (to clip coupons from, of course) and she’s golden.

My dad, Papa K (as my Instagram handle knows him), has a specific way of doing things. OK, it’s more than specific… it’s precise, really, meticulously precise. He likes certain things “just so.” Certain things are done a certain way and once they are done, he can relax. While this may seem like he’s too fussy, I will challenge anyone to watch him make English muffins with peanut butter and call his process anything less than magical.

The point is that I never grew up with anyone saying they were anxious. In fact, I didn’t really learn too much about my anxiety until I went to therapy. I learned acceptance while society’s conversations about mental illness started to become more comfortable. Looking back, I can see behaviors within myself that would definitely qualify. Since I’ve had articles published on The Mighty, Papa K and I have talked a lot about this, and he has determined that I was the one who gave him anxiety. In reality, he realizes his behaviors have originated from a place and for a reason beyond having the “weirdo gene” as he’d like to say.

I’m not saying any of this is a bad thing. It just “is,” and this brings me to my next point.

Having this realization does not mean that anyone needs to handle any of us with kid gloves. You know what I’m talking about. It’s the whispers of “[they] have anxiety” when you announce you need to leave a family event earlier than planned. It’s the exchanged glances when you determine a time for yourself to visit and leave when it’s over. These whispers are accompanied by the unfortunate realization that being OK to talk about your mental illness doesn’t make it any less awkward for everyone else.

You need to remind yourself that what you’ve got goin’ on isn’t a negative reflection of who you are as a person. Instead of shifting uncomfortably at the sound of those whispers or the side-eye glances, plant your feet and lock your knees. Ground yourself and know you are an unbelievable badass for attending a family function while you’re anxious (they are pretty scary, after all).

Now, I need to address those who are hearing what they may think is a “dramatic excuse” or an avoidance tactic. It’s OK to be uncomfortable. You can’t relate. But my friends, the kid gloves, whispers and glances are not the way. Neither is telling the anxious “you need to focus on what you can control.” They are.

Another bad response is suggesting we “let it go.” Because in my opinion?  There’s nothing worse than entertaining the thought of “letting go” ie: flying into an open void to the tune of the same name. You all know what I’m talking about.

So all you non-anxious “cool-cucumber” types, trust that we, the anxious, know how to do best for ourselves. We know you care, but we don’t need to know all of the ways you think we could do better for ourselves. Kindly direct your energy elsewhere. I mean, we know you care and all, but wouldn’t you want to be doing something more fun? All of the problematic-but-awesome VH1 reality TV shows from the early 2000s are on Hulu at the moment and from what I “hear” they are pretty entertaining.

To my anxious homies, you keep doin’ you. You may not have it all figured out right now, but you’re the one who swings the bat on what works and what doesn’t. You’ll get there.

I’ll get there too.

Photo by Julian Hochgesang on Unsplash

Share
or  Copy Link
Link copied to clipboard.
Be first
195 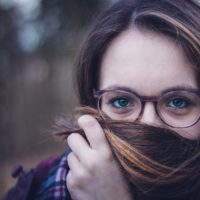