My Journey to Be Proud of Living With Learning Disabilities

Disability pride is a relatively new concept for me. For so many years I hated my disability and would try to hide my disability. I thought the worst thing would be if someone found out I had a learning disability. I never thought any good could come out of having a disability.

Much of the shame surrounding my disability began shortly after my diagnosis in kindergarten. I went to school in a small Western PA district. It was one of those schools where the community was close-knit and everyone knew each other. The community was not diverse and was only welcoming to you if you fit into the small boxes. Differences were not accepted or celebrated but feared.

I felt little connection to the majority of my peers. The students in regular education classes did not think I was smart because of my disability. I can remember being in a social studies class in sixth grade and I got an A on my first assignment. Another student heard about my good grade and asked incuriously, “You got an A?”

I have also been an avid reader and loved books. I can remember reading a book and having a student come up to me and say “You’re always reading and you’re so ‘stupid.’ I’m smart and I never read.” The student who told me this was considered to be smart and popular. I did not find acceptance with the students in my learning support classes. Most of my classmates had reading difficulties, not math disabilities. Some of the students did not have learning disabilities but behavior issues. I can remember being in a learning support math class and I got an answer wrong. One of the students said to another student, “We’re the only smart ones in this class.”

I was not expected to be successful. School did get easier for me academically as I went into high school. My grades began to improve and I made the honor roll. Socially, things began to get more difficult. The social groups were more defined and I felt no connection to any of them. Thankfully, I began hanging out with students from a school in a nearby school district. I also found community groups that had a more diverse population.

The stigma did not end when I began college. I did not use accommodations because learning disabilities were not widely accepted. I can remember students thinking that students who utilized extended test time or having the test read to them were given the answers. People also thought it wasn’t fair that they were given extra test time. I did not want to be lumped into that category and my grades suffered. I did not use accommodations until much later.

When I went back to school to get my bachelor’s degree, I decided to not be ashamed of my disability. I used the accommodations of a note-taker, extended test time and tutoring. I advocated for myself by talking with new professors at the end of class. Most of my professors were understanding and did what they could to support me. I also spoke up in my classes about having a disability.

I can recall more acceptance than rejection. I remember a peer that remarked that college was an eye-opening experience for him. He went on to say that he never met a gay person, or a person with a disability before he arrived on campus. I can also remember the professor asking the class what they would do if someone was making fun of the person with a disability. The same peer that was not exposed to differences said he would tell the person off. The professors explained that we are not to tell people off but to educate other people on disabilities.

The accommodations worked and I struggled less. I made Dean’s list for one semester. I graduated with my bachelor’s degree, despite a physiatrist who told me that I could not go beyond community college.

I will always have a learning disability. I no longer feel ashamed of my limited math skills. I have made peace with the fact that I will never be able to drive or be an amazing athlete. I also feel comfortable sharing my story and no longer want to hide in the shadows. I want to help other people with learning disabilities to know they may have a disability, but they can be successful. Success may look different for each person, but it is possible.

I have had to learn to choose my audience if possible. Not everyone is caring and many people do not understand what it is like. Many people think they can cure me or underestimate me. A learning disability is not a dreadful disease, but simply a different way of learning and thinking.

Share
or  Copy Link
Link copied to clipboard.
Be first
303 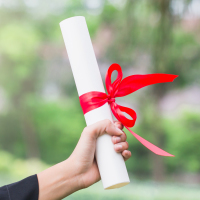