Like so many young couples, my husband and I knew we wanted to start a family. That day came on May 31, 2000, when Evan, our first of three sons, was born. Despite jaundice that appeared for about a week after his birth, he was as healthy a newborn as any parent could hope for. We visited the pediatrician for well child visits and were proud that he was growing typically and achieving all the baby milestones.

Despite these wellness visits, there were many missed signs that my son was not as healthy as everyone thought. We didn’t realize that what we thought was “eczema” and excessive itching of his face and ears was an indication of a very serious disease.

It wouldn’t be until his 18-month well child visit that our family would begin our journey with a chronic liver disease. Evan’s pediatrician was concerned about his unusually large abdomen during a routine visit and immediately ordered blood tests. It would take months to receive a diagnosis, in large part due to the rarity of the disease. In 2002, Evan was diagnosed with a genetic liver disease called progressive familial intrahepatic cholestasis (PFIC). PFIC is characterized by impaired biliary secretion in the liver, resulting in cirrhosis over time.

Our lives were changed forever.

We were told that PFIC was progressive, so it would worsen over time. Doctors said that one day Evan’s liver would no longer function. With this diagnosis came the reality that our firstborn was not only unwell, but very sick with a rare disease that has no cure. We were also keenly aware of the fact that because of this diagnosis, there was a risk that any other children we had in the future could also have it. After much consideration and discussion, we decided to have another child. Braedyn was born on July 30, 2003. God had blessed us with another baby boy, and he is very healthy and does not have PFIC.

On April 20, 2008, we welcomed our third and last child, Camden. With a basic blood draw, we would learn that Camden also had PFIC. We were devastated to receive another diagnosis of PFIC in our family but determined to learn even more about this rare disease. So much had changed since Evan was initially diagnosed. Doctors ordered genetic testing, which was not previously available. We learned that both of our sons have PFIC type 3.

While both boys take medication daily to help increase bile flow, there is no cure for any form of PFIC. Ironically, their yellow, jaundiced skin and eyes are no longer seen as “different.” It is their “normal,” particularly for Evan. Both boys have lived with symptoms of liver disease that most people don’t understand. There are many sleepless nights due to the ceaseless itching known as pruritis as their livers release toxins into their blood streams. It is relentless and exhausting. Evan and Camden have trouble focusing and, in our experience, often feel overly tired due to their weakened immune systems.

Despite all of this, my boys have persevered. This diagnosis has never stopped them from doing what they love and participating in sports and activities with friends. We have tried to live as typical a life as possible with this chronic illness and instilled in them that PFIC does not and will not define them.

Yellow is a familiar color for us. It is the color of rare disease and uncertainty. Due to the progressive nature of PFIC, Evan’s health has declined. As Evan approaches his 20th birthday, he is now sicker than ever. The easiest way for us to explain what is happening to others is: His liver has had nearly 20 years of toxins building up, and it is tired.

End-stage liver disease is terrifying. Evan has been hospitalized twice in that last two months due to complications of this disease. His jaundice is the worst it has ever been, and he is dealing with edema in his legs, as well as ascites within the abdomen. The once-active teen who played sports and lived a relatively normal life is now very ill and in the beginning stages of liver transplant protocol.

Despite their health challenges, Evan and Camden are mighty and they are stronger than anyone can imagine. I pray that this same determination and spirit gets them through all the steps of their journeys with this disease, which may ultimately lead to a liver transplant. We are encouraged by research that could lead to a treatment or cure someday so that other children don’t have to endure these same challenges.

There are many heroes in this world. Those heroes who help others through acts of kindness or in times of danger. My heroes are my two sons. Their heroic acts are showing me how to love, live and persevere through the hardest and scariest of times. They have also taught me that where they often see through shades of yellow, they also see shades of strength and hope.

Share
or  Copy Link
Link copied to clipboard.
Be first
260 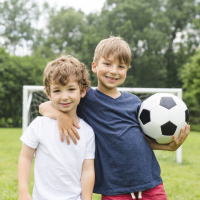