The weeks surrounding Mother’s Day are always complicated for me. Despite the fact that I love my children more than I can put into words and thoroughly enjoy spending time with them, what should be a happy time for me is bittersweet at best. Those feelings stem directly from my childhood and the complicated relationship I had with my own mother.

I never really knew my mother. I knew her untreated bipolar disorder with fits of rage. I knew the abusive woman who I remember telling me that she hated me and wished I was never born as early as 7 years old. I knew the woman who used to physically beat and mentally berate me, who told me I was inherently unlovable and a waste of space. I knew the woman who minimized the rape I experienced at 11, the first of many, discouraging me from telling my father because “daddies don’t love little whores.” I knew the woman who shot my father shortly after my 16th birthday, sending me careening into a chaotic downward spiral from which I never fully recovered.

It isn’t that I hate my mother for all that she put me through. In all honesty, I never really knew her. She was a stranger to me. I understand now that she was battling her own demons and illnesses. I can relate to that more than I’d care to admit. But I also know all too well the damage her words and actions caused. I am still picking up the pieces and trying to heal from my childhood decades later.

We were estranged for a few years when she passed away just over a decade ago. I’ve spoken to people who knew her in her final years, knew her after she finally began receiving better mental health treatment and addressing her own demons. I’ve heard stories of the woman she became, a woman who loved “Harry Potter” and doing crafts with neighborhood children. I never met that woman. The mother I grew up with still haunts my nightmares.

In many ways, I feel I have failed my own children. I have struggled my entire life with mental illness, partly due to genetics and in part due to the abuse and trauma from my own childhood. I’ve been battling major depression, post-traumatic stress disorder (PTSD) and a generalized anxiety disorder my entire life. I went into motherhood unprepared, hurt, traumatized and broken. I could never be the mother I believed I should be or wanted to be — the mother that they deserve. In some ways, my mother’s legacy became a self-fulfilling prophecy. She told me I was unlovable, worthless, useless, a failure and a waste of space. I in turn internalized everything she ever said to me and it left a lasting impact on my own children.

It isn’t that I didn’t love my children or that I didn’t try to the best of my ability. I was just such a mess. I still am. There is so much I hadn’t healed from, so much I am still trying to work through. I spent more hours than I could count reading to them, teaching them, doing crafts, playing at the park, trying my best. But I also spent more hours than I could count withdrawn, traumatized and feeling broken. I took far too long to get the help I needed because I was terrified of being labelled as “crazy” as my mother had been. I hid from the stigma attached to mental illness so I pretended I was OK even though I clearly was not.

People often say hindsight is 20/20 but nobody ever warns you about the repercussions of that regret. Whether intentional or not, I hurt my children immensely in the long run. Though I would like to blame how I turned out and the mother I became solely on my own mother, I know I bear responsibility as well. I should have sought help sooner, should have tried harder. The shoulda, woulda, couldas haunt me on a regular basis.

I look forward to celebrating this Mother’s Day weekend with my sons.  They’re adults now and will be coming up for the weekend. We have family meals planned with them, my husband and my step kids, as well. As much as I love them all and am beyond grateful to have them in my life wanting to observe the holiday with me, I’m honestly not sure I deserve it. I wholeheartedly believe they deserved a much better mother than I ever was.

For me, every Mother’s Day is a roller coaster ride of recounting past trauma and facing personal regrets, sprinkled with the unadulterated joy of having my kids here with me. As proud as I am of the adults they have become, I cannot help but think they would have been better off with any other mother than me and that breaks my heart. But honestly, I never had any idea how to be a mother because I never really had one myself.

Can you relate? Let Beth know in the comments below.

Share
or  Copy Link
Link copied to clipboard.
Be first
137 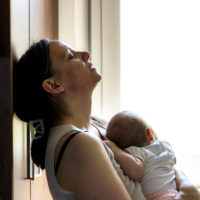