Dear Retailers: No, a Sanitization Kit Is Not ‘Perfect’ for OCD

Obsessive-compulsive disorder (OCD) is a disorder that is grossly misunderstood and easily mocked. OCD just means you’re neurotic about germs and cleaning, right? Aren’t we all “a little OCD?”

Unfortunately, this false idea is perpetuated constantly by the media, and retail stores are not exempt. A product was listed on the Target and Bed Bath & Beyond websites (and a knock-off on the Walmart website) and has been brought to public attention by OCD organizations and advocates, such as the International OCD Foundation. The product is a kit intended for “safety” and sanitization when traveling or leaving your home. The kit includes a mask, hand sanitizer, antibacterial wet wipes and travel tissues.

It’s hailed as being “perfect for OCD” and is called an “OCD essentials kit.” 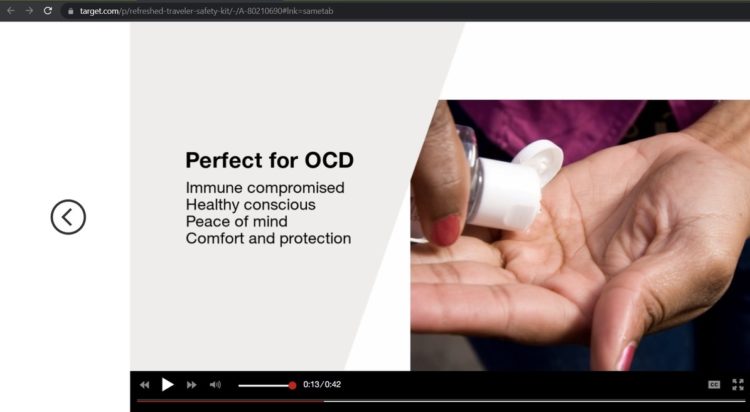 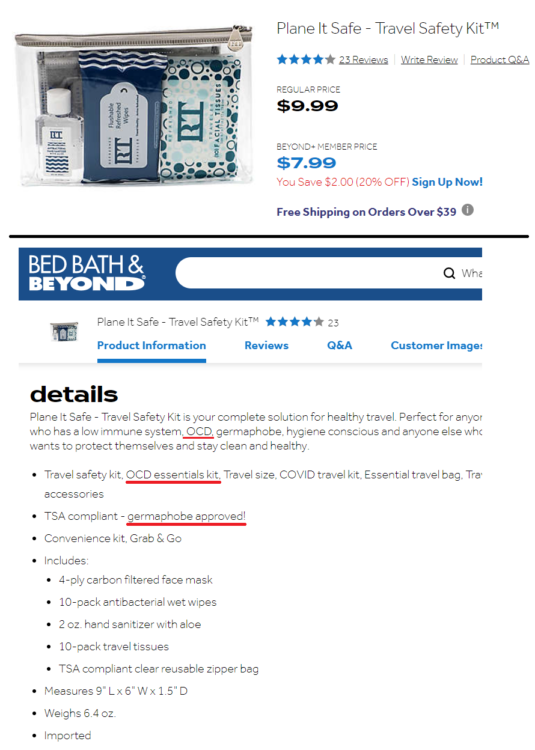 A video on the Target website claims the kit is “OCD approved,” as though everyone who struggles with OCD has already given the kit their stamp of approval. 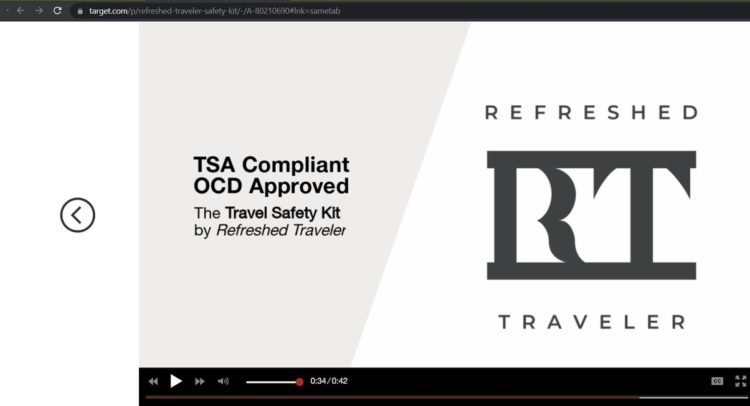 Though the OCD references have since been removed from their descriptions and video, let me explain why this is messed up. Two reasons:

1. OCD is not a “cleanliness” disorder.

OCD is a disorder of the brain. Incorrect signals are being sent through the brain, with involvement in the prefrontal cortex, basal ganglia and thalamus. While the exact cause is unknown, the brain involvement is clear. The malfunctioning signals being sent cause a myriad of issues and can present as:

Even talking about OCD can be scary, because you may believe acknowledging it could bring harm to you. Obviously, OCD is a multifarious and often paradoxical disorder. To put it simply into a “germaphobe” box underplays the complexity and severity of the disorder.

2. When someone has contamination OCD (because not everyone with OCD has a fear of contamination), they struggle with a debilitating fear of germs that might harm or kill them or someone they love.

That’s a pretty basic description, but they might also have a fear of contracting a specific disease, fear of radiation, fear of bad luck and a strong avoidance of crowded spaces. They might hold their breath every time a person walks by. Obsessive handwashing is a symptom, but not for everyone. And it doesn’t look the same for everyone.

Some people might need to use a large amount of soap and wash their hands for exactly 20 seconds. Others might need to wash under their fingernails every time. For some people, maybe they just need to rinse the dust off of their fingers, but they have to be careful about how they turn the handle on their faucet, because they don’t want to get more germs from that. They may use a tissue to turn the faucet on and off. As you can imagine, even handwashing will be done in the specific way a person’s brain tells them they need to do it for the brain to stop sending the “you’ve been contaminated” signals.

So, think about it like this: When a person struggles with alcoholism, what’s the last thing you would give them? Alcohol, right? Similarly, when someone has contamination OCD, you don’t sell them a bottle of hand sanitizer and encourage them to indulge in the fears and obsessions that plague their daily lives.

It’s not healthy to address OCD by urging someone to give into the obsessive thoughts and act on the compulsions. They need to reject the thoughts and deny their brains the indulgence in the compulsions. I hope you can imagine this is not an overnight process. As with any other mental illness, OCD can be difficult to recognize, much less treat. Professional involvement is recommended for safe and effective treatment, not a “safety” sanitization kit from a retail store.

There is no kit that is “perfect for OCD.” What’s effective and much more helpful than a sanitization kit is spreading truthful information about OCD and bringing awareness to the complicated issues those with OCD have to deal with every day. Be eager to learn, and instead of derision, show compassion; you won’t find that for sale in a retail store.

Photos via screenshots from Target and Bed Bath & Beyond websites.

Share
or  Copy Link
Link copied to clipboard.
Be first
431