This Children's Book Features a Deaf Character and Sign Language

When Henry was born, he had a lot of hiccups. And out of that, “Henry’s Hiccups” was born.

Robert Munsch was and still is one of my favorite children’s authors. I love the silliness and repetition of his books. The design of this book was inspired by him.

​What is the story about?

Henry is a happy student until he encounters a problem. He can’t get rid of his hiccups.

He tries a number of ways to get rid of them, but no matter what he does his hiccups keep getting in the way of correctly answering the teacher’s questions.

That is until he discovers a new way of answering questions without speaking – sign language.

Why is this story important to me?

1. I reached a lifetime goal.

Writing and publishing this story fulfilled a lifetime goal. It certainly wasn’t easy. I queried and sent in my manuscript to upward of 30 publishers.

I heard back from two of them, and they were both no’s with very little feedback besides “Thank you for sharing your story with us. Unfortunately, it isn’t a right fit for us.”

That was hard, but the silence was harder. I kept imagining that my manuscript was sitting in a huge pile of unread stories.

I soon learned that I was right, and this unread pile was called a slush pile. I learned this in a Publishing a Children’s Book class. After the class, I realized that self-publishing was the way to go.

It wasn’t admitting defeat. It’s actually becoming more and more popular with so many sites helping you with self-publishing, and more and more authors wanting to have full ownership and say in their stories.

After a few more failed attempts at getting my story published with a traditional publisher, I started my self-publishing journey.

And that’s why I am so proud of my book. It’s all done by me or someone I know.

2. My illustrator is a former, deaf student of mine.

This brings me to the next reason why this book is so important to me. I teetered with the idea of hiring an illustrator, but since the book features a deaf character, I really wanted a deaf illustrator.

JoJo, a former student of mine, was just the person to ask. They were one of the first students I had in class as a teacher. Their artwork was brilliant back then, and I always thought they had amazing talent.

We had kept in touch over the years, and I had approached them once about illustrating my book, but they were hesitant to do so because they didn’t have any credentials or professional experience. I didn’t care about that.

I knew they were talented, so I kept pestering them to do it. JoJo finally agreed. And I was so excited.

JoJo illustrated and brought “Henry’s Hiccups” to life better than I could have ever imagined. It makes me so proud to have one of my former, deaf students illustrating this book.

3. My book is diverse and represents my family.

The most important reason I wrote “Henry’s Hiccups” is that it’s about my son. As a biracial boy who has one Black parent and one white parent, I don’t see a lot of representation of biracial families in children’s books (although this past year it has gotten better).

This book normalizes having a biracial family without the focus being on that. The family just exists in the background of the story. I want readers to have the takeaway, “Ohh, there’s a biracial family. Cool. Move on.”

The same is true for the deaf character in my story, Natalie (named after JoJo’s best friend in high school in real life and also a former, deaf student of mine). The focus isn’t on Natalie’s deafness. She is a character that exists in everyday life, and it shows how deaf and hearing people can be friends.

Oftentimes, deaf people have to adapt to a hearing world, and they have to accommodate the hearing people who come into their world. But, in the story, Henry knows sign language. He adapted to Natalie’s world because his friendship with her is important.

None of that was said, but that’s how I imagined it when I drew up the idea of having a deaf character be friends with Henry. It may be an idea for a second book — the background to Natalie and Henry’s friendship.

When writing the book, I wanted to share my love of sign language with the world and knew it made a great secondary piece to the story.

I share 10 basic signs to learn in the back of the book. They are also illustrated by a talented former student who is deaf, Dunia Etulu.

All of these reasons together make me super excited to share this book with you. 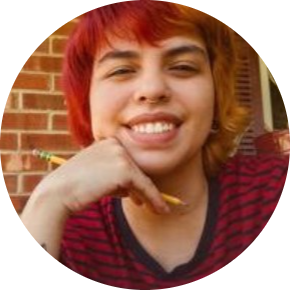 How to use this book as a teaching tool

As a teacher, I knew I wanted to write a book that could be used as a teaching tool with young kids. Here are the ways you can use my book to do that.

The book follows a pattern. The language in the book is repetitive which is good for young readers. It helps them make predictions of what will happen next.

Henry is told three common ways he can get rid of hiccups, but each time he thinks the hiccups are gone, he hiccups while trying to answer the teacher’s questions, and everyone laughs.

After the first attempt fails, invite your little ones to make predictions on whether Henry will get rid of his hiccups.

Also, ask them what they think Henry’s idea is when he sees Natalie’s classroom toward the end of the book.

The book uses synonyms for the word “laugh” each time Henry gets the answer wrong. Discuss how these words all mean the same thing and how your kids could tell they did.

The book reviews three basic academic questions: The shape of an octagon, simple addition, and the first color of the rainbow. Besides asking your kids these questions, you can review other shapes, addition problems, and colors.

Henry has a problem, but he doesn’t give up. He keeps trying new ways to succeed until he finally does. Teach your children about a growth mindset.

Finally, teach your kids sign language. Besides being fun to learn, there are many benefits. Read about them here and here.

I hope you enjoy “Henry’s Hiccups” as much as I enjoyed creating it. It’s a fun, silly story with so much more packed into it.

You can buy “Henry’s Hiccups” on Amazon.