When You're Diagnosed With an Incurable Disease You Didn't Plan For

The night after I received my diagnosis, I watched a comedy bit with my husband that’s essentially just a comedian arguing with audience members at his show about why their opinions on the best dinosaur are wrong. Dan Telfer, the comedian, lets them know that the best one in fact is the ankylosaurus, which means “fused lizard” because this guy can just lay down and take a nap and let his solid armor fend all these other dinosaurs off. I know that “ankylo” means “fused” because because my rheumatologist told me what it meant that morning. After months of testing, stiffness, pain, blood work and crying in MRI machines and ultrasounds and genetic testing, I have been officially diagnosed with ankylosing spondylitis (AS).

You might ask, “What the heck is that?” because I surely did. As we all know now, ankylosing means “fused” and spondylitis is essentially inflammation of the spine (and in my case the hips and pelvis). For me and others with ankylosing spondylitis, it means that my spine and hips have arthritis, thanks to this autoimmune disease I have. Left untreated or not well treated, my spine will begin to fuse together.

I know. What the hell.

My rheumatologist is great. She is tall and gangly and she is amazed every time she finds a new tattoo on my body during examinations. She is maybe the second doctor I’ve had in my life who doesn’t look me up and down and assume pain I have is because of my weight, depression or anxiety. She does all the tests, takes all the notes and is clear that autoimmune disease doesn’t happen because of anything I’ve done. It’s terrifying to feel relieved at this news, at this kind of treatment, to feel such a relief at hearing that you actually have an incurable disease that could fuse your vertebrae together and limit your ability to move. I think about how messed up it is that my first feeling is relief at being treated like a human and not just some failure at life because of the size of my body.

She examines me and takes measurements of my joints, of my range of motion, of the distance between different parts of my body. I lay on the table as she crosses each leg over the other to see at what point it hurts. I let her do this while I think about the last time I even had a physical when I lived in the United States. I can’t remember having one before I moved to Canada and I wonder if I would have ignored my pain for years back home, just taking enough Tylenol to cut the pain a bit and going on with my days and weeks and months and years. I wonder if they wouldn’t have found out until my spine was beginning to actually fuse. I sit up stiffly and am grateful to know I have this and not have to worry about how to pay for anything. It’s just another layer. It’s unnecessary.

I wonder how you treat AS and my doctor tells me: anti inflammatory drugs at a much higher dose than the Naproxen I’ve been taking daily, specific exercises, movement in general although gently at first, rest for fatigue, eliminating as much stress as possible. In the future, physical therapy and possibly biologic medications to prevent fusing. I’ll have an examination and blood work every eight weeks for the next year to see how the disease progresses. She notices a rash on my leg and makes a note for my existing upcoming visit with the gastroenterologist. My gut symptoms point towards some kind of irritable bowel disease, which seem more likely now as they are highly comorbid with AS. We are peeling away the layers and I’m impatient but grateful for the care I’m receiving, for answers of any kind at this point. 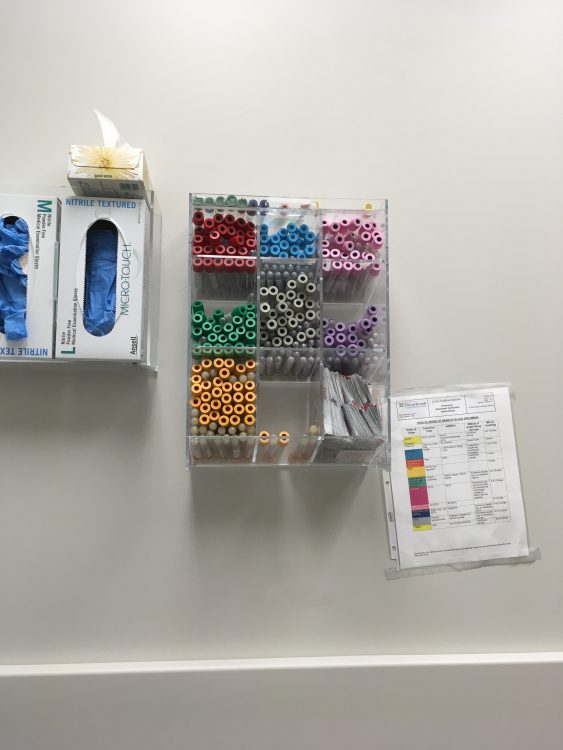 My doctor is gentle but honest with me. She knows I have questions. No, it won’t be any harder to conceive if that’s something I want to do. Yes, it would be best to not be in an active flare-up as I am right now before conceiving. No, I am not any more likely to pass this onto a child I have. Yes, it will make childbirth more complicated and difficult. No, there’s nothing specific I should or shouldn’t eat at the moment for this. Yes, it’s not because of something I specifically did to cause it. No, I should not wait to reach out if I have new symptoms or the medication doesn’t work as well as we hope. Yes, a lot of your life is going to change. I take my prescription for anti inflammatory drugs with added stomach protectant, my materials about AS, and the requisition for more blood work and leave. I get my blood taken and go home; I take a new pill on the streetcar, I can’t wait to get home to take it.

I am positive when I talk to my husband and my friends and family about it, the same way I have been about my symptoms for the past year. I say that there is a plan, there are medications, there are exercises, there are things you can do. And there are! But there isn’t a cure and there are many bad days, many cancelled plans, many days of feeling uncomfortable in every possible position, many nights without restful sleep, many many things I wish I didn’t have to do and face.

I have a pelvis filled with flowers tattooed on my leg, an image that spoke to me so much that I knew I wanted it on my body forever. It didn’t mean terribly much to me when I first got it but now the meaning seems to have come later: flowers growing from deep within bones, hope and life blooming from where it shouldn’t. Sometimes things happen backwards. Sometimes the most alive you’ll ever feel is when you know what you’re up against. Maybe there’s nothing to be said for letting yourself hide behind your armor and sleeping your life away. Everyone knows the best dinosaur is the brontosaurus, which never even existed anyways.

I’m a writer and editor living in Toronto with ankylosing spondylitis, major depressive disorder, and also my husband and cat. I make bad jokes as a coping mechanism; I apologize in advance.