How My Dog Helps My Anxiety and Panic Attacks

I say all the time that I don’t know how I would have gotten through all of the really intense anxiety stuff without my partner and my sister. And I really don’t. But I also wouldn’t have gotten through it without my dog. There are a lot of things she helped me with that I didn’t even realize until later, and to this day, she keeps helping.

1. She gives me unconditional love.

Anyone who has a pet knows how much this matters. There’s a person who I adore who adores me back? Sign me up. This is especially helpful with anxiety and depression. So much of the self-talk that comes up in people dealing with these conditions is negative: something is wrong with me, it’s my fault, I’m broken, I’m a mess, etc., etc. There was a lot of this going on for me when the anxiety stuff first started because I was so used to keeping my emotions to myself, and also because it’s very common in my family to put others ahead of yourself. A lot of the work I initially did in therapy was discovering that anxiety comes up for me in situations I can’t control or when I feel like something has the potential to make me look selfish, incompetent or thoughtless. Having the dog around when I was thinking these things was so helpful because she was always happy to see me, and she showed me so much love. None of it was based on who I was or who I was trying to be; she loved me no matter what.

When I got back from that first trip to Florida, I got up each morning intending to go to work and then ended up sobbing over the sink and dry heaving. It was rough. Physically, I felt awful, and it wasn’t helping that I just kept thinking, “What’s wrong with me?” My partner was still down at his parents’ house, and I was on dog duty. I hated the prospect, as all I wanted to do was stay in bed and cry and watch Bob’s Burgers, but in retrospect, it was probably the best thing for me during that time. Interacting with her, feeding her and walking her gave me a purpose. It gave me a reason to get up. It reminded me that taking care of people helps me feel like myself, which I sorely needed. And it got me outside. It got me moving. The science behind anxiety and depression shows over and over that exercise is really important because it releases endorphins, which help to elevate mood. It would have taken me longer to recover, longer to feel like myself, if I hadn’t had the dog to force me outside.

3. Her level of concern is just right.

Anxiety can be maddeningly inconsistent. During one attack you really need physical comfort; the next, you don’t want to be touched. This has been the subject of a lot of conversations for me and my partner, and we’ve navigated our way to having a system for check-ins in place that really works for us. To be honest, that process would have been a lot longer and harder without the dog. Whatever she did always seemed just right, and it helped me to articulate to the dude what I needed and why, which I was really struggling with. The first thing is that it was obvious she cared. She would follow me around with a concerned look on her face, and if I left the room, she was right behind me. She was always in a place where she could see me. She would also sit next to me instead of on top of me, so I got to decide how much contact I wanted, if any. And because she doesn’t speak, she wasn’t asking me a million questions I was in no shape to answer. She let me know she was there, that she cared and then she let me take it from there. Noticing this pattern is what helped me articulate to my partner what went on during an attack, and now he does the same thing except in his own extra special and human way. 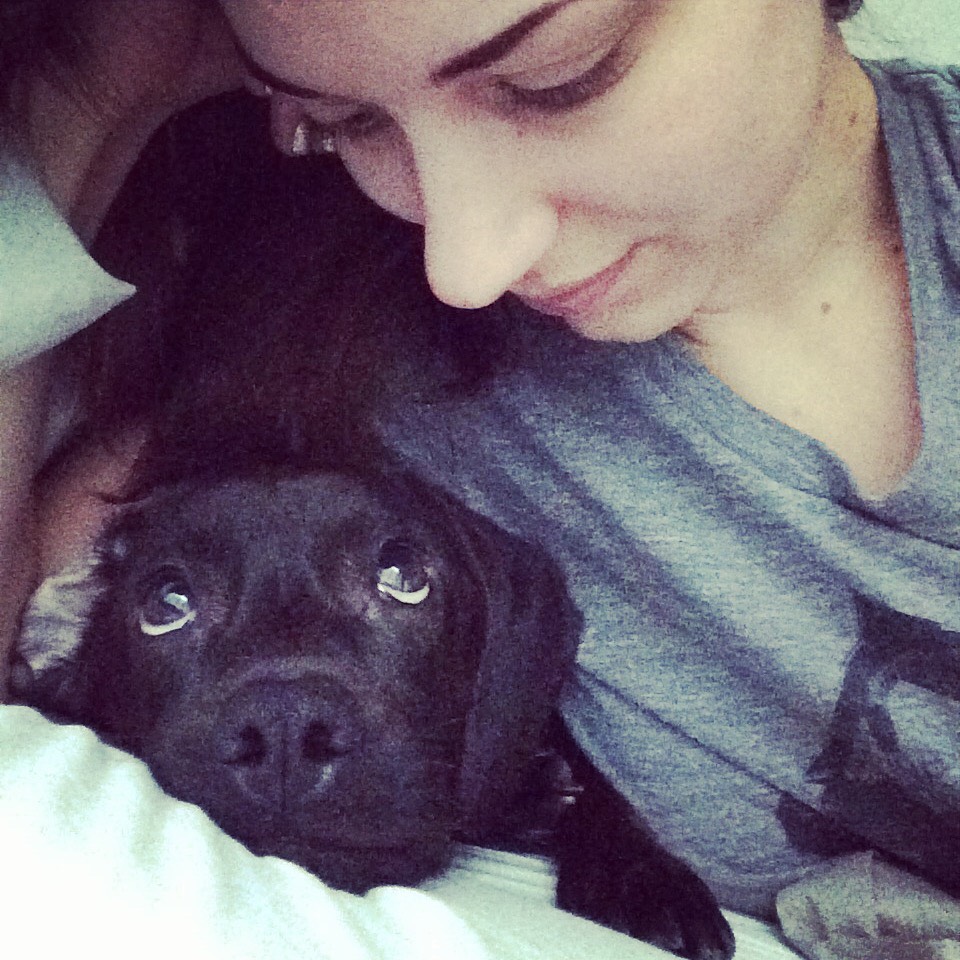 4. She motivates me to actively manage anxiety.

This one is more subtle than the others. The catalyst for going to therapy was twofold: having panic attacks on our trip to Florida, and listening to my sister tell me that when she looked at me, she saw someone who was in a lot of pain. They’re the reasons I started going, but the reasons I kept going were my dog and my partner. (And also my own stubborn determination to get it figured out, but we’re going to ignore that for now.) I started having panic attacks right around the time when I realized shit was real with my partner, and that was a big motivation for therapy. I didn’t want anxiety to be the reason we weren’t together. But a bigger question for me was if I could parent with this happening: all my life I’ve thought being a parent is the most important thing I will ever do and I was terrified anxiety would end that dream. As mentioned above, I learned I could still take care of someone while I was anxious, and a few months later I learned I could do so while in the middle of a panic attack. I will never forget sitting in the back seat of our rental car with the dog, telling my partner to keep driving as I cried my eyes out, doubled over with nausea, and yet still somehow held up the garbage bag for the dog to vomit into and gave her water. Obviously, an infant is a whole different situation, but having to take care of her in the middle of the attack helped me to see it was possible, and if I kept working hard on treating anxiety, it was a situation I could actually function well in. It blew my mind to realize that.

Alexis Schuster is a high school English teacher living in New York City. She blogs about her experiences with anxiety and panic attacks as a way to not only help her own healing process, but to contribute to the conversation and help end the stigma around mental health. Follow her journey at itsonlyfear.org