When We Asked Ronda Rousey If She Had Apraxia of Speech

It started with an intriguing title — “Ronda Rousey: The World’s Most Dangerous Woman” — and then a picture of a “James Bond”-type beauty.

Now, I normally wouldn’t click on stuff like this, but today I had a day off, the kids weren’t fighting and I thought, OK, sure. Let’s see. A beautiful “James Bond” girl is the most dangerous woman in the world? Sure. Let’s read about this.

And then I read this:

“In her first six years, nobody knew whether she’d ever speak an intelligent sentence, such were the after effects of being born with an umbilical cord wrapped around her neck. It could be that her gibberish and mumblings were signs of brain damage. No one knew, and her parents — Ron, an aerospace-industry executive, and De Mars, an educational psychologist and statistician — moved when she was three from Riverside, California, to Jamestown, North Dakota, in part to be near the Minot State University speech therapists, who set about bringing her vocal cords to their senses. It wasn’t easy, and it took time. And it was especially frustrating for Ronda given how advanced her sisters were. ‘I’m dumb, Mom,’ she once said. ‘Maria and Jennifer have the words. I don’t have the words.’ ‘No, you’re not, you’re very smart,’ her mother told her.”

And then I was hooked. I started googling her name. I read every interview. In almost every interview she made mention of her “speech impediment.” Each time she talked about it, the more my mind thought, This is apraxia.

I threw up the question to the apraxia kids Facebook group. Yes, people had heard of her, but no, they never heard she had a speech impediment and they sure didn’t think she had apraxia.  Hmm.

Did I mention I had the day off and my kids were being good?

So I started to research some more. In one interview she said her dad called her “sleeper.” She was just waiting to bloom. In another interview she talked about wanting a Hulk Hogan Wrestling Buddy when she was 3, but she couldn’t pronounce his name. She remembers going to toy store after toy store and not being able to communicate what she wanted, until a salesman figured it out. Man, how many of us have been there? When your kid can finally tell you what they want, you would sell your house to get it. She has to have apraxia. I have to at least ask.

One problem: Ronda Rousey is incredibly famous. What could I even write that her PR people would read and then pass on to her? Could I try her FB page? Twitter? I settled on the “contact me” form on her website. I started writing to her PR people, but it emphatically turned into me writing to her. I didn’t hold out much hope, but hey, might as well put it out there. Apraxia needs a face, and what better face then this badass female! She’s smart, talented, driven, resilient… Doesn’t she sound like our kids with apraxia?

Before I closed my computer, one last thing on her website caught my eye. She wrote a book. Hmm. Maybe she writes more about her speech impediment in her book?

Wait, that’s… today?! Oh my gosh. She is in Colorado! She is in Denver tonight!

I have to go! This is amazing. I have to ask her. I can ask her in person! Laura, are you crazy? Ashlynn (my daughter) has speech therapy and swimming tonight. You can’t go down there. Plus, are there even any tickets left?

I called the bookstore and there were tickets left, but they were almost gone. I had to buy the book to get a ticket. I was number 422 out of an allotted 500.

What did I just do? I don’t watch MMA. Just this morning I didn’t even know who Ronda Rousey was and now I have bought her book and a ticket to go to her book signing on a night we are slammed with appointments.

Yep, I was definitely going. I packed a CASANA apraxia brochure, inserted my walk poster and off we went.

Ashlynn was stoked. She loves books. She could not believe this big book was for her. She held it like a prize and she wouldn’t let me hold it.

We stood in line and people thought she was adorable. Ronda’s youngest fan. I started to get nervous. What am I doing here? I dragged my 5-year-old baby to a book signing on a mother’s intuition. Oh well. If nothing else, this woman is pretty kick-ass. She’s not famous for her good looks (even though she’s beautiful), she’s not famous for being a reality star, she’s famous for being talented and smart.

Finally it was our turn. As we got closer, her bodyguards were crabby and everyone on her team seemed tired. They were literally pushing people after their book was signed so they wouldn’t take up more time for selfies. She wasn’t personalizing books. In fact, you couldn’t even hand her your book. They handed it to her for you. Sigh. I took out my hidden apraxia brochure.

Oh well, maybe we’ll still be able to talk. Those bodyguards though. Gulp.

I sent Ashlynn up to the counter by herself because I read in one interview that Ronda has a soft spot for kids who seem to have the same speech disorder she did, so she really tries to take time for them. This was no exception.

Ashlynn walked shyly up to the counter.

Ashlynn answered but she couldn’t understand so she leaned over and asked again. I only got one picture before I went over to clarify “Ashlynn.”

Ronda started signing her book. I said quickly, “Ashlynn has a neurological speech disorder like you did and we are inspired by you because you overcame that and so much more.”

Almost on auto-pilot Ronda responded, “Yep, I had to overcome a lot to get here.”

I was so nervous. I had to ask her ASAP. Luckily she took a long time to sign the book. Laura, say it!

“Did you have apraxia?”

Ronda stopped signing, looked me in the eye and said, “What did you just say?”

“Uh, uh, apraxia? Dyspraxia? Was that your speech impediment?”

She looked incredulous and repeated, “Apraxia, yes, this is what they think I had.”

I smiled. I knew it. Un-freaking believable. I looked over at the bodyguards. What the heck. I threw the CASANA brochure on the counter. They moved in, but she motioned them to stop.

I said, “This is information on apraxia. If you really did have it, will you say that in your interviews instead of speech impediment? It would mean so much to our kids who are struggling with it.”

She again looked at the brochure before looking back up at me and said, “I will. I really will.”

She started to get really worked up now. Emotions spilled out of her. I read in an interview people think she’s so tough, but really she wears her heart on her sleeve and she was, right then, in that moment.

“They wanted to put me in a special classroom away from my friends. They thought I was stupid! But by fourth grade I was top of my class in algebra, and by high school I tested gifted.”

She looked back down at the brochure before looking up again and said, “I will. I really will.”

Ashlynn and I ran out of there. Before we left I pointed at Ronda and said, “Look, Ashlynn! She has apraxia,” and then I pointed to a line of almost 100 people who were still waiting and said, “and all these people want her autograph!”

Ashlynn smiled. We ran out into the rain laughing.

“You’re going to be famous, Ashlynn,” I said, and we laughed.

It was late by this point and we still had a 30-minute drive home. I stopped by my parents’ house to tell them the story. They couldn’t believe it!

I finally got home and ate dinner while my husband put Ashlynn to bed. I fired up my computer and just for the heck of it, I went to Ronda’s Facebook page to like it. That’s when I saw this: 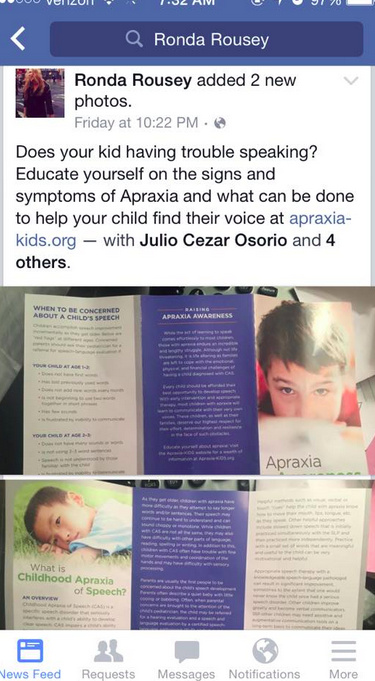 She reposted the brochure I gave her! She must have done that first thing upon completing the book signing. She is one of our kids. So freaking awesome!

We will always have that book confirming what I have hoped all along: 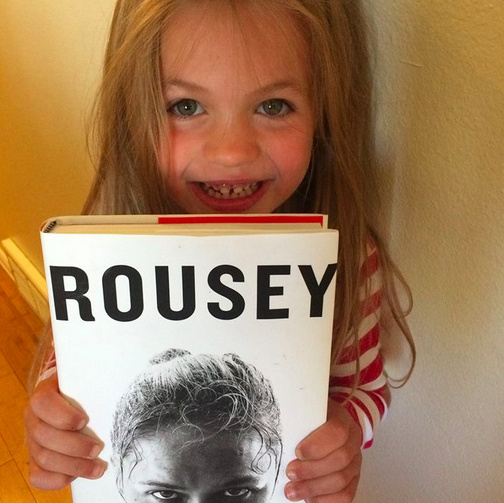 The Mighty is asking its readers the following: Describe a moment you gave or received a gift that touched your life in a special way. If you’d like to participate, please send a blog post to community@themighty.com. Please include a photo for the piece, a photo of yourself and 1-2 sentence bio. Check out our Share Your Story page for more about our submission guidelines.

Laura Smith is a married mother of two children, the oldest of whom has a variety of invisible disabilities. She is a speech/language pathologist who now specializes in Childhood Apraxia of Speech after her daughter’s diagnosis, and is the voice behind the website SLPmommyofApraxia. In 2016, she lost one of her closest friends to suicide. She believes dialogue around mental health is crucial to end the stigma.

laura-smith
Want more of The Mighty?
You can find even more stories on our Home page. There, you’ll also find thoughts and questions by our community.
Take Me Home