Dear Donna, a cashier at Wendy’s:

My 10-year-old and I stopped in for lunch today on your shift. I could see after you asked him how he was doing today that his jumbled answer might have caught you off guard. You shifted your eyes to me and then back to him as he continued… something that happens all the time in our world. So I looked down at him, and as his 24/7 speech and language coach I said, “You can say, ‘I’m good!’”

But then you caught me off guard. Instead of looking to me for his order, you asked him. He answered you. You leaned in and said, “I think you said you want a cup of water… is that right?” He nodded. “Aren’t you getting anything to eat?! What else?” After he excitedly spit out a string of jargon you asked him to slow down and try again. So he did. “Fries,” he said unclearly. “What size?” you asked. “Medium.” “Great… anything else?” You looked in my direction. I shook my head as my son clearly said “Nope!”

What you didn’t know as we held up the line is that my son has childhood apraxia of speech, but the name of his disorder didn’t matter to you… what mattered to you was making sure you got his order right. You didn’t “let” him be an equal patron at your restaurant… he just was. You let him be his own expert. You presumed competence. Not your version of competence — his. You allowed him the dignity of time. You asked him his name to put on the screen for his order just like everyone else and checked out to see if you said it right and even asked him if he knew how to spell it for you. So he did. Through this act I’m certain you’re not expecting a newspaper article or local talk show segment… you weren’t trying to be noticed or given kudos or to be called a hero because you took a moment and tried a little harder. You wanted a 10-year-old at your counter to order lunch, just like any other 10-year-old might on a Friday afternoon. 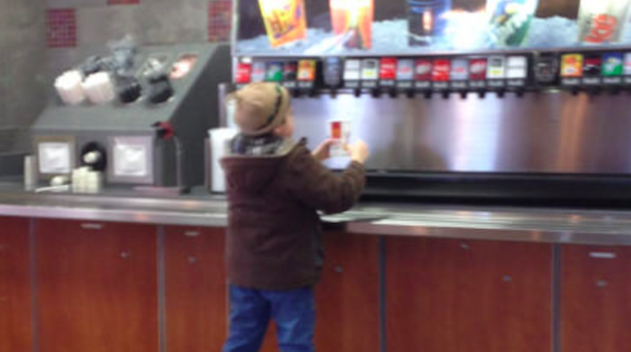 Advocacy and inclusion are tricky things. When it comes from a place of equality, empathy and understanding it is a wonderful thing… when it lacks authenticity it can still have its place but can also be humiliating and damaging to an already fledgling movement. By “letting” my child be prom king or shoot the last basket in the last 10 minutes in the last game of the season, by being so kind as to “be his friend,” well-meaning people are inadvertently continuing to marginalize him. No one has assumed he was worthy of the crown on his own, able to make that basket without help or that maybe he makes one heck of an awesome friend and that perhaps he is the kind one.

So you, Donna, your authentic advocacy is the kind that will change the way we as a society approach disability. Thank you for lunch with a side of hope.

Jaycee Kemp is a licensed independent social worker in the Midwest and is raising two perfect children in an imperfect world. She finds the raw beauty of &#8220;Living in the field&#8221;. You can find her blogging at www.runningthroughwater.com. She is passionate about advocacy and encourages others to do the same. Look for her in your town… she may just feature your story in her anthology of real people living real lives under extraordinary circumstances. Follow Jaycee on Facebook at Running Through Water.