My son N has always been a picky eater. No, scratch that. How about super-sensitive-and-guaranteed-to-refuse-any-new-foods? That’s a much better description.

It’s not just because he is on the autism spectrum. Part of it is probably the sensory defensiveness that can come under the autism umbrella and part of is it anxiety about new tastes and textures. I mean, this kid hasn’t eaten candy in his entire life! He couldn’t care less about ice cream or pizza!

I know, I know — he sounds like a 6-year-old who only eats healthy stuff. But this is way bigger than that. He accepts six foods, and those are the six food choices he’s been sticking to for the past four years. It’s a constant cycle of dosa-pasta-rice-pretzels-chips-fries. So no, not healthy by any means. And his dislike of non-preferred foods is so strong, he will actually gag at us eating a meal. It’s that hard for him. Eating at restaurants means taking his meal along with us, and he’s that one kid at the party who’s eating his little box of pretzels because he cannot stand the sight of birthday cake. Not fun for us and definitely not fun for him. And as he grows older and smarter, he now realizes how much control he has over what he puts in his mouth. New brand of pretzel? Not going to happen! Different flavor of the same chips? Ha ha you’re adorable, but nope with a side of nope.

When we were brand new to this, we did the whole “let him go hungry for a while and he’ll eat anything” routine. You can imagine how that ended. One hungry, screaming 2-year-old whose mouth was sealed shut until he saw us buckle and offer him some pretzels.

Since then we’ve tried many (smarter) ways to address this. Food chaining, offering him new foods all the time, smelling kit, using dry edibles for art projects, getting him to feed us, etc. Nothing has really worked sustainably. Some progress, but it is slow-going. And it really comes to bite us in the butt when he falls ill. He will absofreakinlutely not eat a pill or swallow a liquid medication. Once he was dehydrated after a virus and his pediatrician advised me to give him Gatorade and juice, and I laughed all the way home. Like, seriously, lady? Do you know nothing about my child after five years of seeing him? All I had to do was offer him Gatorade? Why did I not think of that before? Snort.

So that’s where we were until recently. You still with me? OK.

This past month, a bunch of his buddies had birthday parties at school. His teacher has been offering him bits of popcorn and chips (new brand) at every party, and color me incredulous when she reported that he licked a chip and a single piece of popped popcorn. I seriously did a comical double-take when she told me the news! On the drive home, I felt like rolling down the windows and yelling, “My kid licked a chip.” Might have gotten a few blank stares and some surprised ones, but that’s how ecstatic I was. And then this past week, he saw me snacking on some popcorn, so he walked over and watched me eat for a bit. I held my breath and tried to make it the world’s most interesting production of a person consuming popcorn. Sneaked a glance at him — he was still watching me. 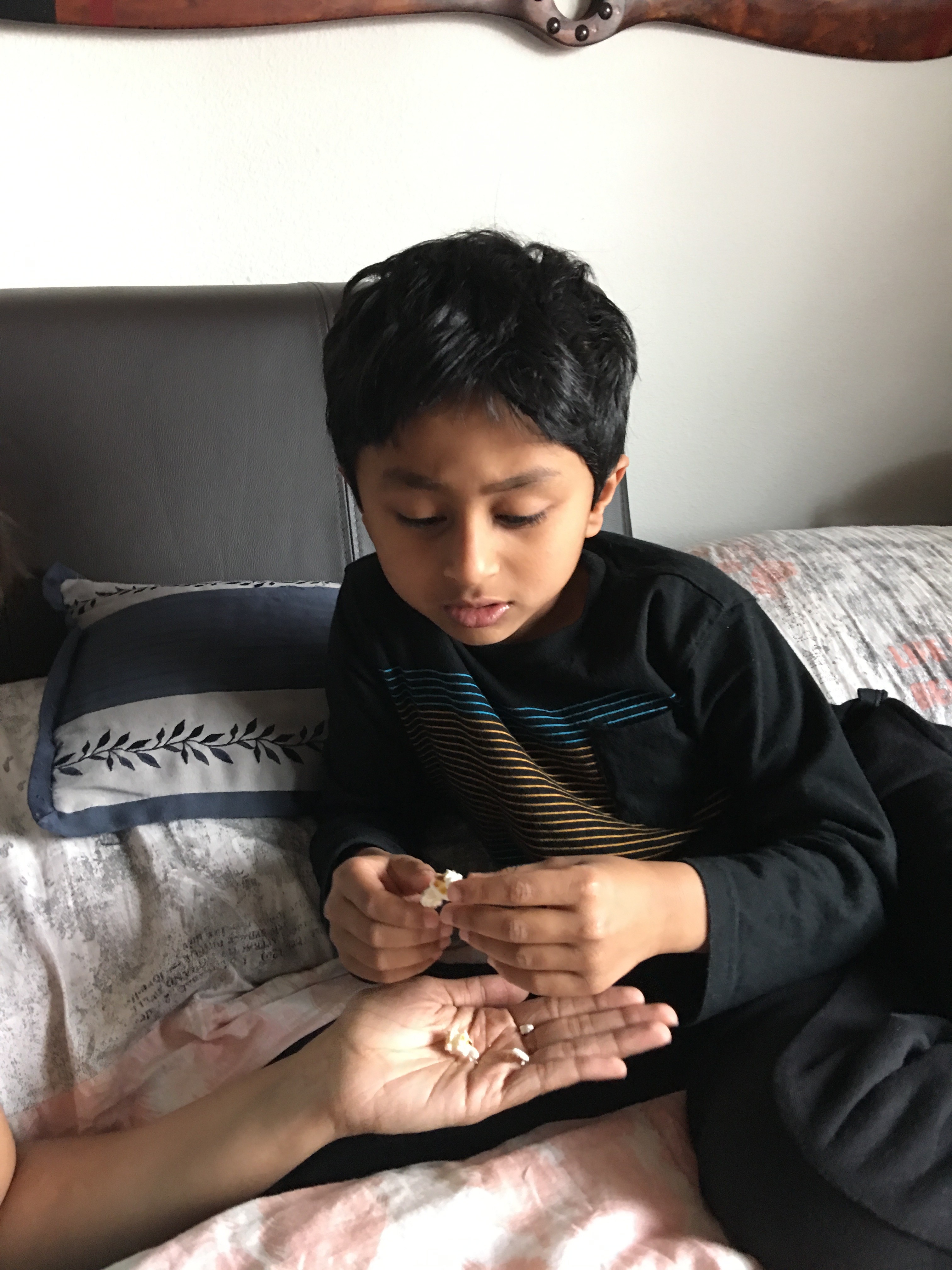 Then yesterday, while I was going at the popcorn again (What? I like popcorn!), he actually put his hand in the bag and fished out a few pieces. I swooped in with the intensity of an eagle and asked him to lick one. And he did! Then at my urging, he put one in his mouth and swished it around a bit, grimacing the whole time. Spat it out, but didn’t gag! Cheering inwardly, I asked him to do it again, but he refused.

Later last evening, his Dad got him to do it again. And then — angels singing — he ate a piece of popped popcorn! And then another! Almost gagged, but the moment passed. I slept better last night than I have in ages.

And today, he ate popcorn almost casually. Twenty whole pieces of beautiful, fluffy popcorn. I counted out each one while his auntie handed it to him. We didn’t say a word, didn’t breathe too loudly. Just watched in awe as this 6-year-old boy ate and enjoyed his popcorn. We cried happy tears and hugged him while he smiled proudly. He knows what a big deal this is. He knows he’s been so brave to do this. And he knows it might get easier the next time.