Last week we were all trucking through the chaotic abyss that was Target before Halloween, and I heard a child crying. And by crying I mean losing their freaking mind. My husband and I exchanged a knowing look over our soon-to-be 2-year-old’s head: been there.

We continued shopping, and I turned down an aisle where a 20-something gal was fishing through rows of K-Cups. She sighed loudly each time the invisible child screamed. She rolled her eyes. A young man who worked at the store stepped onto the aisle and started stocking. She, again, sighed loudly – this time for his benefit.

He smiled at her.

“Yeah, he’s annoying everyone in the store,” he said.

As she rolled her eyes, again, I translated in my head: “I would never allow my kids to…” and I smiled to myself. Been there, too.

But then she said something that lit me on fire.

“Yeah, well I saw him. He’s way too old to be acting like that.”

When I started writing (fairly) seriously, I basically stumbled, arms flailing, into a group of bloggers. Actually, a friend invited me to a group with a bunch of autism moms in it. As I read through their blogs, I began to see the commonalities and the things that bonded them. I was allowed to watch and learn as they lived it. It turned out, the woman who started the group met many of the other ladies in an autism writer’s group. They eventually started their own group and routinely allow me to bore them with “Hunger Games” and “Doctor Who” references.

They are moms, they are activists, they are researchers, and God Bless – they are hilarious. I’ve never met a more supportive group of women.

My family doesn’t have experience with autism. When I was teaching, I only had two kiddos on the spectrum. I knew of autism, but I didn’t understand it. Yes, I knew the facts and figures. Yes, I had bits of working knowledge and had heard a few anecdotes, but even as a teacher, I didn’t see it every day.

After joining the group, I would scroll through my news feed and see the faces of their children with autism. They are sweet and hilarious. They are impossible and beautiful. They are focused, and stubborn, and they are children, just like all children, who need to be loved and accepted. The more I read about these faces, the more I fell in love with them. I began to see them through their mother’s eyes: their quirks, their bravery and their determination.

In Target, I bit my tongue. Hard. Because one day this adorable girl will understand. Maybe not firsthand, but she’ll see it in a friend’s eyes. She’ll see it on a student’s face. Hopefully, someone will teach her about food allergies and clothing sensitivities. About repetitions and stims. Hopefully, someone will explain to her what a “meltdown” really is and how it feels to be discriminated against. I didn’t scold her. I didn’t reprimand her, because the truth is, someone had to teach me, too.

As we left, I saw the boy. He’d pulled it together and stood next to his mother in line – eyes down and holding a small Hot Wheels car. I couldn’t “tell” from looking at him. Just like the 20-something woman couldn’t. But I could tell from looking at her. His mom had it written all over her.

Her shoulders were still back. She didn’t hunch or hide. She didn’t avoid anyone’s eyes. The checker never looked at them as he scanned each item from her overflowing cart, but what he and the other shoppers didn’t know was that she’d won.

She’s not a “bad mother” with a “bad kid.” She’s a warrior who has placed herself squarely in front of every harm that seeks her child. She takes the stares and sneers so he won’t have to. She knows every detail about him, and today she won. They are still in Target. He is quiet, and he is safe. She knew how to help her son, and she’d probably taught him enough that he was able to help, too.

As we passed with our two items, I said Happy Halloween. She smiled. I’d like to think she knew that Happy Halloween really meant, “I see you, and I see him, and you both matter.”

So the next time you’re shopping and hear an invisible child, take a moment before you judge. Because somewhere in that store is a momma doing her very best, and you don’t know the whole story. Maybe it’s a 2-year-old who missed her nap. Maybe it’s a 4-year-old asserting his independence. Or maybe it’s a boy in conflict with the world, whose momma allows him to be invisible when he needs it, and does her best to clear a path for him when he’s ready to be seen. 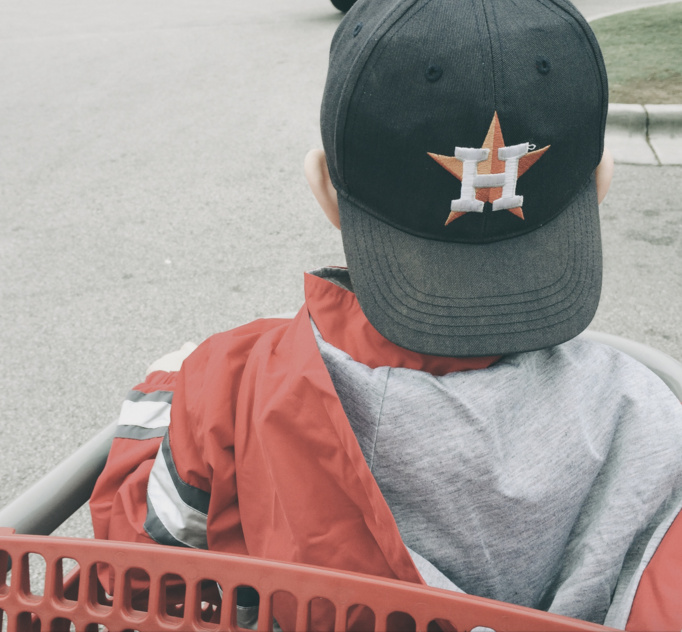 Liza is the author and illustrator. She has a chemistry degree from Texas A&#038;M and likes to plug that whenever she gets a chance. You can follow Liza on her blog, Twitter, Instagram and Facebook.

liza-dora
Want more of The Mighty?
You can find even more stories on our Home page. There, you’ll also find thoughts and questions by our community.
Take Me Home