What It Was Like Growing Up Black, Female, Autistic and Undiagnosed

I always knew something was “wrong,” or as I prefer to say, “different” about me, but I didn’t know what, and nobody else did either, including my parents, family and educators. I didn’t speak much. People would say hello to me and I would ignore them or just turn away. I would go sit in the corner and draw for hours because it was an easier way for me to communicate than speaking. People would ask, “What’s wrong with her?” Most of the time, I would just be called “crazy,” moody, shy or a brat, but I was far from any of those things. I had anxiety, but none of us knew what it was a the time, and I was autistic, which no one knew either.

Art has always been my escape — drawing, painting, theater and dance were my communication tools. It was a place for my emotions when they didn’t fit anywhere else. I did not have a lot of friends and I was bullied most of the time. I didn’t understand I was being teased or tormented. I just felt like I was being treated differently. When I was in plays as a child, I would always get the role I auditioned for, and sometimes that meant a friend who auditioned for the same part would stop speaking to me, call me names, and get others to stop speaking to me as well. 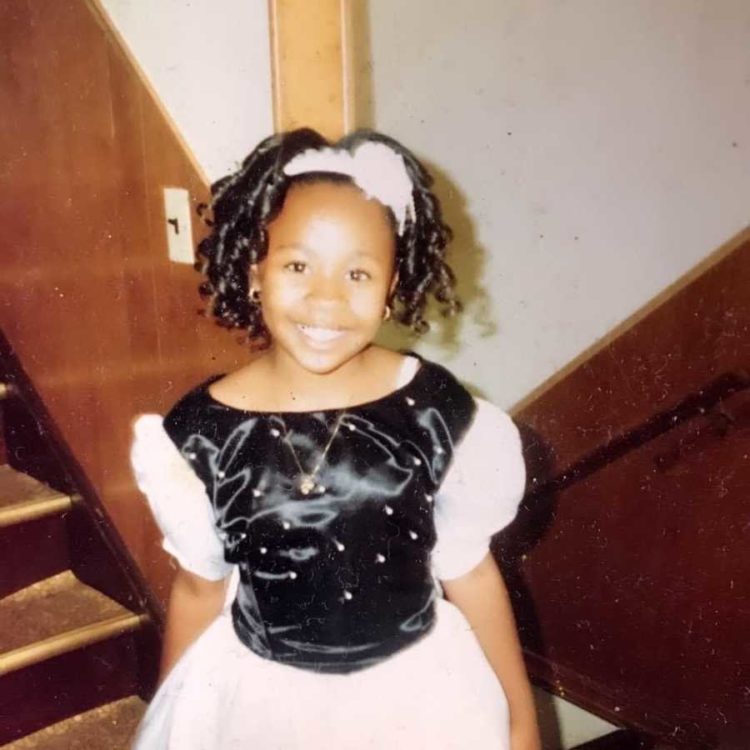 Many don’t feel people with autism are worthy of living their dreams. I think Hollywood, Broadway, and even smaller theater groups often depict a horrible representation of autistic actors, models, etc. There are plenty of autistic performers capable of playing autistic and non-autistic roles, but they won’t be cast. They will easily cast a non-autistic person to play an autistic person, or a non-disabled person to play a character with some other type of disability before even looking within the community.

I had a late diagnosis, I believe partly because there is a myth that Black girls don’t have autism, so it would never be something they would think to test me for. When I was diagnosed, it hadn’t been the first time I had heard I could possibly be on the spectrum. Years before, my therapist had mentioned I seemed like I could be on the spectrum, but never did anything about it or took any further steps to help me get some answers. When my team of doctors sat down to discuss it with me, they asked me if anyone ever mentioned to me I may be on the spectrum. I was hospitalized at the time, so this is where my evaluation was done. It took hours; I couldn’t focus or sit still and I was getting aggravated. We took several breaks and they were very understanding. 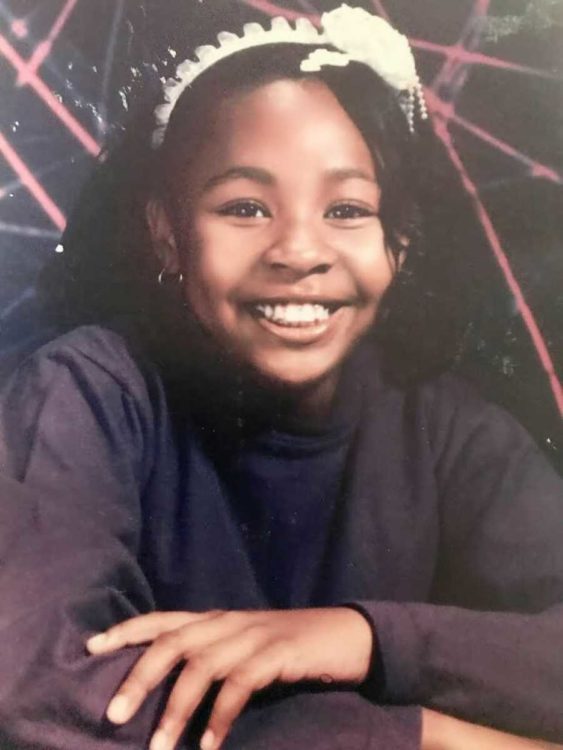 My test results were not a surprise to me. It was hard to accept, but it was also a huge weight lifted off my shoulders. There was a reason I am the way I am. There was a reason I struggle to communicate, have sensory issues, have nonverbal periods etc. It gave me a better understanding of myself. Learning I was autistic changed my life because I could now teach people how to and not to treat me. I could now handle situations better because I was aware of the reason my mind reacts to situations and information the way it does. I understood I was not having tantrums, I was having autistic meltdowns. I understood I wasn’t having shutdowns, I was experiencing autistic burnouts. 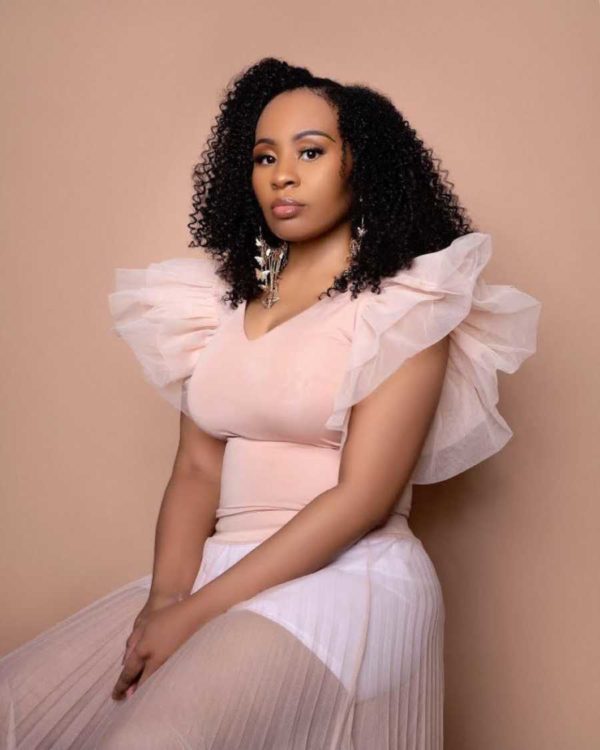 These are false. I’m Black and I have autism. I’m not “stupid,” although I may need things explained to me in a different way than a non-autistic person. I’m also very empathetic. Everyone has dealt with others not believing in them and I’ve dealt with this too, but the people who don’t believe in me do not matter to me. Those who really care about you and value their relationship with you will believe in you and your dreams.

I’ve had over 115 seizures. July of last year was my worst experience with them, and they caused the most lasting damage. They were the most violent and the hardest to wake up from. I experienced memory loss, which I still deal with, and my speech was affected but I’m working toward getting it back to where I started. The types of seizures I’ve had are grand mal seizures. I’m on medication, but for some reason, it stopped working for a while. Even when I’m doing really good, one will slip through here and there. Right now, I’m experiencing a lot of episodes, but we haven’t figured out why yet. I take 26 pills a day (down from 33) so I feel like that’s an improvement. 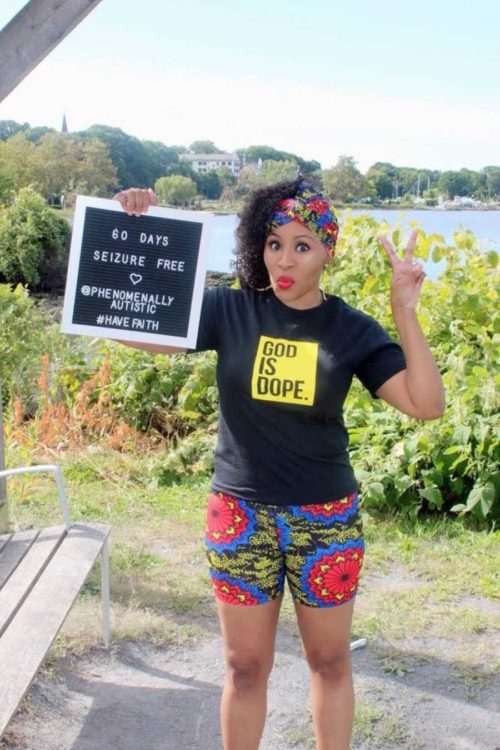 When I draw, paint, and design, I don’t only create things with autism in mind. I’ve made awareness art for breast cancer and other illnesses as well. When we had a surge in police killings, or when they were more publicized and more awareness came to the issue with cases like Breonna Taylor and George Floyd, I made pieces in tribute to them, to raise awareness and show my support and honor their lives. This is the way I knew how to express what I was feeling about the issues. I didn’t know another way to communicate it.

I hope others know staying positive helps a lot. You may be living with challenges, but that doesn’t mean you still can’t be blessed. I am very blessed. I always want those living with autism (or any other challenges) to know they should never put limitations on themselves and they should definitely not let others put limitations on them because I believe God puts no limitations on you. If you have a dream and passion is there, you can do it. Some days will be really hard but others will be really great. I choose to focus on the really great.

If had to give advice to others with similar or any challenges, it would just be to focus on the really great. Every day will not be wonderful, but we have the next coming day for another chance at happiness, another opportunity for joy, and another day to fight again. Even though it may get extremely hard, never give up, know the pain won’t last forever, and hold on. Forget all the rules written for people with autism and live your life the way your heart desires for you to live it. Don’t accept something is wrong,” just know you are different, and different is beautiful. Different is special.

I have a lot of family members and a lot of cousins who are very protective of me, even the younger ones. I think they are still learning about autism and their understanding of me, but they have never treated me differently because this is how they’ve always known me. They understand I just can’t do everything. Sometimes it makes me sad or I feel alone but I’m used to it. Even though I don’t always understand why things happen the way they do as far as my health and challenges, I still never question God. I just trust in Him, and it works for me.

This story originally appeared on Love What Matters.

Ayanna aka Phenomenallyautistic is an autism advocate who brings positive attention &amp; awareness to autism. She is also a artist , illustrator,fashion designer &amp; author with a children’s book about autism coming out! along with having autism she lives with seizures an autoimmune disease &amp; a chronic illness, but she doesn’t let that stop her from spreading her messages of self love, joy, equality &amp; autism awareness &amp; acceptance through art &amp; fashion Children’s Book Author &amp; Illustrator - 13 books to date! The latest ‘My Melanin’ available on Amazon Creator of 3 coloring books for girls of color Designer ( kids customs ) - Harlem week, wbls Circle of Sisters, WPIX 11 morning news, Talijah Waahid World Natural Hair Show, Lover of all Performing Arts Theater Lover Dreamer

phenomenallyautistic
Want more of The Mighty?
You can find even more stories on our Home page. There, you’ll also find thoughts and questions by our community.
Take Me Home